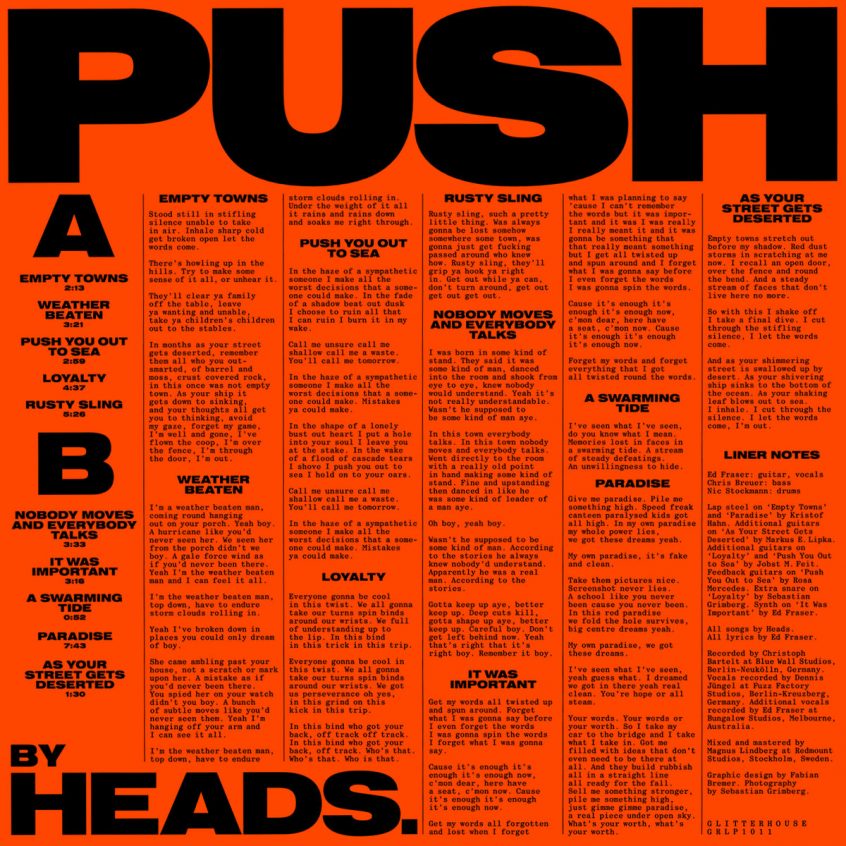 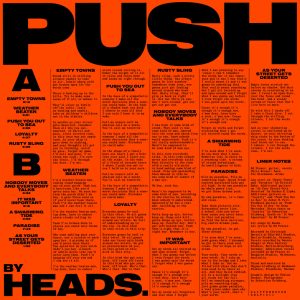 This is a tense, consuming listening experience. Three albums in and the German/Australian trio, HEADS. have channelled some of, if not, their best work into Push, because – spoiler alert, this is fucking special. That sense of trepidation that existed on their self-titled debut and bled through to 2018’s superb Collider, are all present on Push, which is even more angular, disjointed, tense and catchy to boot.

First of all, the production on Push is chunky as hell. Every thumping bass note (and there’s lots of them) can be heard on this, every crisp, solemn drum rattle, every grit-encrusted guitar chord does a great job at sinking its fangs in and not letting go. If you’re not hooked by the run of the first three tracks on this and you’re into the Melvins, Harvey Milk, METZ and any other noise rock band under the sun, then there’s something deeply wrong. The opener, Empty Towns, begins with this see-sawing riff that reminds me of an old steam train’s wheels, complete with the shrieking crunch of the metal and the ghostly whistles. Vocalist Ed Fraser’s Australian drawl cuts through the noise like a knife through warm butter, it bristles with confidence, knowing and derision.

Hook that bass intro from Chris Breuer on Weather Beaten up to my veins. JESUS. When Fraser’s voice kicks in, it really is the chef’s kiss, especially as his accent is a lot more prominent on every track on Push, and honestly, it just makes every song sound massive compared to his past vocal efforts – whatever has gone on here, it roars, it burns, it feels with such fervour, boiling passion and moments of angst, disgust and sneering hostility. None more so than on Weather Beaten, which is a straining, renting impassioned plea of someone long dead, trying to regain a foothold, but constantly falling apart.

The angular, trash-rock brilliance of Push You Out To Sea, is balanced out by the despicable nature of the unreliable narrator. “In the shape of a lonely bust out heart/I put a hole into your soul/I leave you at the stake” spits Fraser, his emphasis on “stake” has such disgust and discomfort, it’s destructive, angling for the person to return after having their soul damaged beyond repair, left for dead. Yet, it’s an absolute rager through and through, the way the guitars twist and contort, with this fuzzing, echoing roar, whilst the drums thunder along with METZ-like precision.

The indignant and brash Nobody Moves and Everyone Talks has the dirty, mouthy swagger of Idles, it’s snarling, guttural, post-punk, fist-pumping excellence, complete with the aggressive, off-hand narrative and slogan-esque lyrics along the lines of “apparently he was a real man!” delivered in this sarcastic, laughing tone, amidst this twisting, bludgeoning caterwaul of screeching noise. One of the best tracks on Push is It Was Important – the only track to not feature a guitar, incorporating instead, a space-rock sounding synth, alongside Chris Breuer’s muscle bass thump, whilst Fraser’s rambling, almost stream of consciousness vocals (which apparently aren’t, but feel and sound very improvised) give it a Listener-style, feel and something that would slot nicely on a record by The Chariot (if they still existed) during their explosive barrages of chaotic noise.

The 52 seconds spoken word of A Swarming Tide make me wish Fraser would release an audiobook (dude has a killer voice) and works as an intro to Paradise, the longest track on Push, clocking in at a beefy 7 minutes 44 seconds, a dark, brooding piece, that is laced with heavy melancholy, regret and longing. The outro stretches out with such teetering unease and showcases that from the punching onslaught of the first half, HEADS. can incorporate moments of true beauty amongst the sweaty, pulsating vehemence. As Your Street Gets Deserted calls back to Empty Towns, effectively, bookending Push between this crunching, metallic bass tone. It acts as the perfect coda to the album, concluding what’s happened, the memories made, the memories left, the memories deserted. The words “I take the final drive” obviously reference departure, the message of a ship sinking to the bottom of the ocean and finally, the last line:

If you’re looking for something that touches lightly on the tone of You Won’t Get What You Want from Daughters from 2018, or perhaps has that brooding Nick Cave-feel, or the sad-cowboy strut of Bambara, mixed with the gluttony of the Melvins, then Push should be in your collection.

Abandon your senses and bang your head through a wall to Push by HEADS. below.