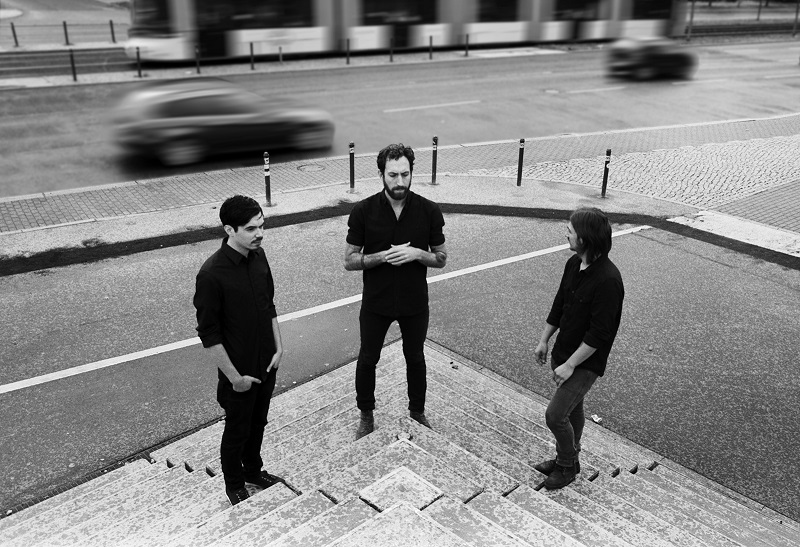 It’s no surprise to learn that HEADS. will be going on tour with METZ in June and any other bands who like writing their name in capitals only. HEADS. are 1 Australian and 2 Germans making stripped-to-the-bare-bones noise rock that in places, gives a nod to that 90s grunge sound, alongside a gnawing, low-end scrape of disgruntled darkness. Similar to soon-to-be-touring-mates METZ, HEADS. are uncomfortably raucous in their dishevelled and somewhat nonchalant approach to creating sounds that can be reformed into music.

Opening track, A Murial Is Worth A Thousand Words, can barely stand up. It’s staggering about everywhere, sloshing beer in every direction – utterly legless. The bending, grumble of crunching bass and steely drum patterns keep it upright, whilst vocalist Ed Fraser’s Australian drone channels a Cobain-esque “don’t fucking look at me” attitude. He’s not quite at the point of seething, but there’s a nastiness there and he wrestles strangulated chord after strangulated chord out of his guitar with menacing frustration. “How’s about, I’m getting off my face…” he croons on the bizarrely titled Chewing on Kittens. He sounds beyond ruined as this dreamy-haze of throaty, rhythmic psychedelic rock pushes at your senses, scrambled guitar lines cutting in and out (think ‘68 and their turbulent efforts at keeping to any kind of formula) over the unsettling caterwaul.

Moving on, and Fraser can barely contain his disdain on Skrew – his sneering yelp almost forms a corporeal entity in the room, such is its presence. This off-kilter Drive Like Jehu scribble of indignant noise-punk is harrowing and bleak in its twisted and revolted drone and is absolutely thunderous to boot. It’s the sound of waking up from a 24 session and realising that you’re still drunk and trying to frantically piece together the ‘scenes missing’ from the night before.

HEADS. are uncomfortably raucous in their dishevelled and somewhat nonchalant approach to creating sounds that can be reformed into music..

There’s an almost southern-rock twang to Fraser’s voice on the moody-shift of Black River. His unusual drawl is laced with smoke and that harsh burn of a fine malt, whilst the post-punk sprawl of grinding bass, clattering cymbals and wailing guitar shred all remind you where the loyalty towards jagged, scratching noise really lies. A somewhat quieter and less vicious track, Black River relies on minimalist interjection from the bass, drums and guitar for the first part, only to clatter home in the song’s noisy and choking coda Harvey Milk-style misery and loss. The crackling guitar creek of Foam, coupled with the huge-bass drum stamp brings to mind Dublin’s Girl Band (who incidentally, would make fine touring partners with HEADS.) in all their discomforting glory.

“Where’s Jim? Buried deep under somebody’s driveway…” opens final track, The Voynich Manuscript setting the fear bar at an appropriate level. Poor Jim – he’s pushing up the daisies and will never hear this ode, which is a scrawl of mangled, bass-heavy noise in the similar vein to Girls Against Boys – fractured, broken and slovenly garage rock that punches an amp-shaped hole in your stomach.

You need HEADS. This Australian-German three-piece are a bitter, discordant snarl that may just surprise you along the way. Catch them on tour in Germany with aforementioned noise-punks, METZ.