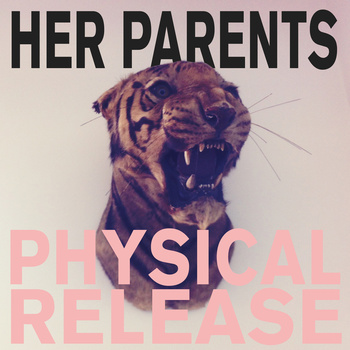 Disbelief about whether Her Parents are a proper band should be thrown out the window. They’ve at least played one gig with Johnny Foreigner and at the time of writing are/have/will be supporting DZ Deathrays in someoneâ€™s living room probably, equipped with their proper haircuts, tunes, etc. (Also theyâ€™re playing Southsea Fest in a couple of weeks and some shows with Heavy Waves very soon).

â€˜Physical Releaseâ€™ was really the only title for this download-only album, considering the scathing and quite frankly bonkers humour associated with the rock and or roll line-up that make up Her Parents (Stairs To Korea, Internet Forever, Dananananaykroyd).

The superbly titled â€˜Win The Lottery, Kick The Fuck Out Of Your Houseâ€™ opens things in a ramshackle-fashion.Â  Coughing, sharp intakes of breath litter the opening drumbeats, before it morphs into a malevolent and crude discordant slice of punk rock. Lyrically, itâ€™s daft as hell, but also contains a knife-edge of creepiness, particularly in the delivery of the line: â€œwith your purple face in my personal space, Iâ€™ll be so cheesed off I could gas the both of us!â€ â€“ Particularly the delivery of the last five words which sound wickedly joyful.

I mean, this is pretty nuts. â€˜Thereâ€™s A Bodyâ€™ is a vicious splatter-punk barrage of noise that switches from angular hardcore onslaught to all handclappy, â€œBAH BAH BAH BAHHHH!â€ choruses that make no sense at all. The throaty roar of â€œTHEREâ€™S A BODY IN A BRIEFCASE!â€ is a particularly brilliant moment. Itâ€™s like a comedy version of Zeke. Partner in crime, â€˜Thereâ€™s A Manâ€™ is a minute of gleeful mischief embracing an All/Descendents style punk strut.

In-joke song, â€˜Whatâ€™s Your Dad Called?â€™ is gang-vocal blender-style chaos. Good times right there. Incidentally, my dadâ€™s called Ian. Lead â€˜singleâ€™ (aka the only song to have a video) â€˜Donâ€™t Knowâ€™, is just over 80 seconds of trying to work out what goes in rum and coke, or what all the buttons do in a plane. Probably. In the video they smash the fuck out of a washing machine and it looks good fun.

â€˜One Five Six Zeroes Four Twentyâ€™ is an adrenalin shot of bass-driven good times. More garbled gang vocals, distortion, a sense of cluttered nonsense and gleeful destruction, whilst â€˜Justin Vernonâ€™ (hi Bon Iver!) is pretty much one of the best songs Iâ€™ve heard this year. â€œHEâ€™S HAUNTING ME, HAUNTING MEEEEEEâ€ follows the wild accusations about Vernonâ€™s achievements (prince of dubstep, built a cabin in the woods, auto-tuned an owl?) over a frantic hook-laden scrawl of fuzzed-out punk.

â€˜Police Manâ€™ is a dark and menacing drone of heavy rock that feels somewhat alien to the tour-de-force frantic of the previous tracks, but nonetheless, works as a howling distorted rattle.

What it all boils down to is that â€˜Physical Releaseâ€™ is the sound of Her Parents having fun. Not just the music, itâ€™s the little things â€“ they way all the tracks seem to be one body of work, joined together by studio sounds, laughter, the shouts of â€œone take!â€ burps, coughs and general tomfoolery. â€˜Physical Releaseâ€™ is a blast â€“11 tracks in around 17 minutes that will no doubt make you want to boot the fuck out of your abode. Get it here and then get the beers in.