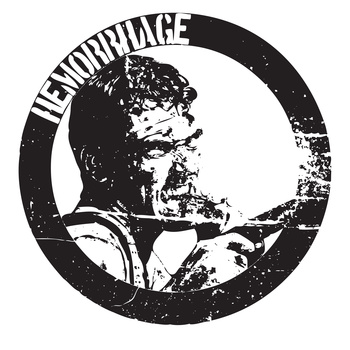 I feel there should be a strong emphasis on the r(h)age in Hemorrhage‘s moniker. In fact, it should be capitalised at all times, with at least several exclamation marks. Hailing from Huntington Beach, Orange Country, this four piece (consisting of vocalist Philip, guitarist Vinnie, bassist Rain and drummer Andres) define their genre as ‘anger’, which is spot on. Chapter One is 7 tracks in around 13 minutes and it’s absolutely punishing. Songs aren’t played – they’re attacked, mauled, thrown about then battered back to where they came from, bleeding, dazed and scared.

Opening track Avada Kedavra starts off somewhat tense – bass and drums rumble forward and explode in a barbed, blister-inducing scramble of splatter-hardcore. Vocalist Phil switches from spirited, scrappy shouts to gravel-throated roars under a hailstorm of shredding guitars and brutal drum rolls. Winter Is Coming is a chaotic ramshackle of brutally fast punk rock spasms, that gives a nod to the lunacy and ferocious speed of Some Girls and the vocals have a similar breathless and ragged holler of Wes Eisold at his most determined and gnarled.

Death For Breakfast assaults the senses in a typically bloodthirsty and exhausting fashion; mixing stringent guitar licks, that bring to mind 90s-alt metal being twisted apart; a bit like Helmet playing 10 times faster and elements of the chaotic blasts of noise that you’d associate with The Dillinger Escape Plan. I Pay The Iron Price is akin to the skate-punk thrash of Cop Problem – erratic and pumped beyond belief, it absolutely thunders home with some truly superb drum rolls, which skitter and bounce all over the place, whilst the vocals are spat with rapid and rabid efficiency, like some fanatical preacher. It’s a storming, furious rush of making and taking your fate in your own hands and easily the strongest track on Chapter One.

Death For Breakfast assaults the senses in a typically bloodthirsty and exhausting fashion; mixing stringent guitar licks, that bring to mind 90s-alt metal being twisted apart..

The subject matter delivered with rapid-fire hostility on Cancer Boy is somewhat jarring – (“Strike me down with this sickness, growing larger every day…tumour teach me to die!“) lending a certain amount of morbid thought to Hemorrhage’s 90 second blast of acidic hardcore punk. This is followed by the sombre, melancholy jolt of Letters From The End, which substitutes speed for doom-laden chords, crunching guitars and sickeningly heavy basslines. “THERE IS NO HOPE, NONE IN SIGHT!” barks vocalist Phil – despair and pain etched in his fractured, spitting shouts, which bring to mind Jeremy Bolm at his most wretched and pessimistic. Closing track Last Man Standing is yet more breakneck, neck-straining Trash Talk-style thrash – uncompromising, hectic and wild.

Â Chapter One is is a cacophonous, snotty and raw slab of bruising hardcore. Hemorrhage stand out from the crowd by being direct, honest and untamed – never afraid to experiment; their splatter thrash-punk spirit is both intimidating and refreshing. Chapter One is available on MP3 for $3 dollars or you can get a nice compact disc for $5. Support yer scene.

Also, the dude on the cover looks more and more like Bruce Campbell circa Evil Dead 3: Army of Darkness, chewing on a bit of meat every time I look at it. Now that’s fucking cool.