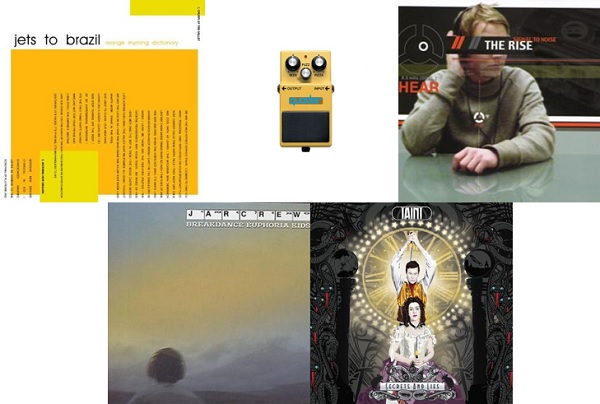 In a similar vein to last year’s post, not everything I’ve heard and enjoyed has had the 2014 stamp burnt into it. Here’s five albums that I’ve enjoyed this year, but weren’t released this year. Got that? Good. Good old Blake Schwarzenbach and his morose view-point on life. Despite listening to a lot of Jawbreaker, I never really checked out Jets To Brazil. What a fool I am. Orange Rhyming Dictionary was an impulse purchase (all Jade Tree Records albums are up on bandcamp for $5) and I’m a better person for it. Obviously, massive influences on thousands of indie-rock acts that have splurged through the musical meat grinder over the last few decades. The thing is, there’s absolutely loads to love about Orange Rhyming Dictionary – whether you want the lyrical word-salad that is the post-punk shift of the brilliant New Morning Disease ( “in a stolen car I rocket west out past that Jersey line  and the robots in their riot gear glimmer in my rearview mirror…”) or the cutting bitterness of I Typed For Miles (“note to self: no-one cares, your voice is average..“) along with the serrated coda of “YOU KEEP FUCKING UP MY LIFE!” and of course the stuttering, guitar-squeal of first track, Crown of the Valley. Somewhat pessimistic, with elements of brackish good humour and a crisp, scratching guitar tone-earworm, Orange Rhyming Dictionary is truly special in every way.

Stream Orange Rhyming Dictionary below and embrace your bitter side. Going to collect all the indie points here. Chances are Quader are relatively unknown unless you’re aware of underground German record label, Rockstar Records. I discovered Quader almost by accident when looking up Toys That Kill – no real connection here, just the same label. Anyhow, I gave first track, Brutus a listen and was instantly hooked. Anthemic doesn’t really do it justice – this sounds absolutely huge, sky-scraping riffs cascade down on this rumbling, Clutch-style groove-rock trail. Dustsucker follows in hot pursuit; flailing hooks that will ensnare you, should you get too close, absorbing you into its 8 minute long barrage of grunge that builds into a wig-out of gloriously joyful space-rock shenanigans. Stereo reminds me of  Norwegian rockers, Span – there’s that similar stoner-pop bounce alongside a desert-cruising stoner-rock drive that brings to mind bong-merchants, Fu Manchu. The 7 minute instrumental build of F.V.S. Hole is another highlight, as is the robot-rock march of Sliver, which feels like it could haven fallen off the first Queens of the Stone Age album. There’s no excuse not to check Quader out if you have Blast Tyrant, Meanderthal, Rated R and King of the Road in your CD collection. It’s also name your price on bandcamp.

All Of The Rise’s song titles from Signal To Noise sound like statements from a Sociology paper. Ridiculousness a side, this utterly kills for so, so many reasons – from Texas, this schizophrenic five-piece obviously listened to a shed-load of Refused; especially vocalist Cory Kilduff, who apes Dennis Lyxzen’s shrill cries of capitalist hatred perfectly, whilst smashing his hands through a plethora of electronic gadgetry. Each track is a breathless, sporadic fit of untamed energy – samples are melded expertly between the chaotic hardcore punk, alongside twisted blast-beats, shrill braying electronica-barks and angular, guttural guitar roars. “FATAL ERROR!!!” roars Kilduff on the insanely titled If All You Have Is A Hammer, Everything Begins To Look Like Nails – this isn’t a man who’s happy; he’s frothing with bile and righteous anger and this is channelled through The Rise and their digital-punk nightmare of sounds. Too bad they split up in 2005, but Refused are back, so it’s a bit of a Highlander situation, isn’t it?

Listen to The Fallacy of Retrospective Determinism and drink your logo-tainted beer, you absolute monster. I really should have owned this years and years ago. Discovered Jarcew back when I was at University through the magic of MTV2 and Rock Sound (a magazine responsible for around 76% of what I listen to). Interestingly, never bought their one and only album (was re-released as just Jarcrew a year later)…UNTIL NOW. Jarcrew had a brief, fleeting existence (six years, 1 album, several singles) with vocalist Kelson spending time after they disbanded with a certain Mr Falkous and Mr Egglestone, before vacating that position and joining Truckers of Husk. So, Breakdance Euphoria Kids then – utterly mental is the only way to describe this. Lead single, the insanely catchy, Paris and the New Math is part-punk, part-disco, part-spazz-hardcore breakdown; Komputer is a mash-up of Indian-sounding strings, electro-beats, Kelson’s deranged screams and scuzz-rock guitar chords. Capobaby is perhaps the only real ‘normal’ song – which sounds like a shoegaze, indie-pop dream escape, while Defacto Symphony is a hazing fuzz of noisy guitars and squelching synthesizers. The album is one big non-sequitur; it fits no genre, making it inherently unique and barmy in equal measure. Taint might be a familiar name to some people – having been active from 1994-2010, having appeared on numerous compilations (several for Household Name Records) and a couple of split EPs (Black Phoenix and SuperFi Records). They have a somewhat concise back catalogue – only three albums. Secrets and Lies is nine tracks of riff-heavy, bludgeoning sludge-metal courtesy of Jimbob Issac (now making noise in the superb HARK). Why should you be interested in this? Because that riff on opener, Hex Breaker, is the rally-cry to war as Taint twist and contort down a series of almost-stoner-prog metal roads. The superbly named Barnstorm Zombie Revival is an indignant, rant-fuelled slab  of noise-hardcore, tied together with some rather excellent lyrics (“Medusa tried to kiss me, so I slipped her the tongue…“) and a blisteringly chaotic coda. Born Again Nihilist batters past with Baroness (Blue Record) precision and guitar-trickery and sounds absolutely massive, crushing and scathing. The Idealist is another raucous, crunch of ripping sludge-hardcore (they even throw in some handclaps!) There’s a lot going on in Secrets and Lies – it packs a hefty punch and be prepared for the near 15 minute 1-2 battering of the post-metal grind of Goddamn This City and the slow-burn of What The Crow Saw. There’s no excuse not to pick this up really if you list Torche, Mastodon and Baroness as some of your favourite bands.