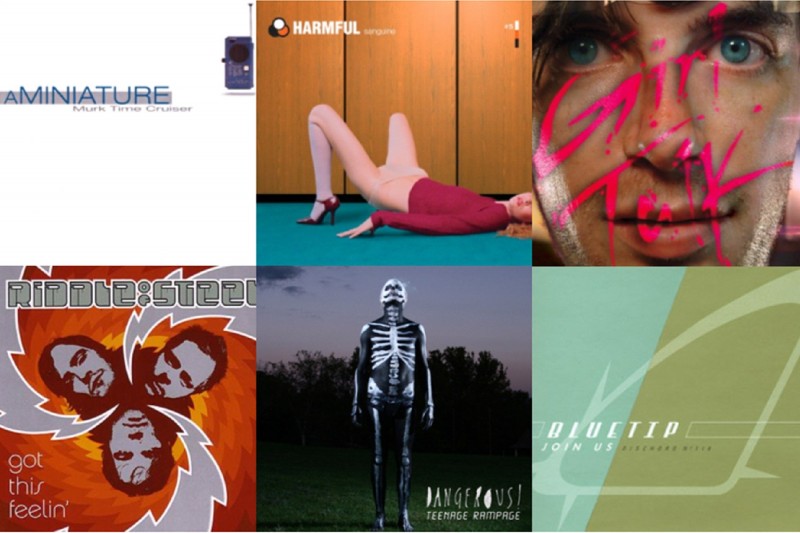 There’s been loads of fantastic albums release this year – but what about albums you’ve heard and discovered this year that weren’t released this year? Well, here are 6 of the best that have battered my eardrums over the last 12 months. If I was to say Murk Time Cruiser was a lost Jetplane Landing album, you’d probably believe me. Well, it’s not, because aMiniature (the ‘a’ is silent, apparently) are an actual band, who broke up in 1997 and predate Jetplane Landing by about 10 years. Released in 1995, this selection of scrappy, Fugazi-punk rock, discordant guitars, yelping vocals and the kind of riffs you’d associate with a certain Derry four-piece make this an absolute gem of a record. Sure, it’s rough around the edges – Listen to He, The Bad Feeler, Bored Spy and the title track and tell me that’s not Once Like A Spark-era shouting back at you.

Click to listen to a live version of He, The Bad Feeler. Possibly an unknown quantity to some, Germany’s Harmful have been kicking around since 1992 and have had a string of albums (all of which are ridiculously expensive to buy on import). Sanguine (released in 2003), is a weird mix of Nine Inch Nails-meets-Helmet and it fucking rocks. Fans of Irish weirdos Therapy? will also find some moments of absolute genius on this, particularly the barbed snarl of Anything or Nothing (my favourite), the jerking, squealing riffs of No Matter and the shouty metallic howl of Overfed. If you regard any of the above three bands as some of your favourites, Sanguine really should be in your collection – no excuses. So this was a weird discovery – Girl Talk is basically the sound of music you’ve already heard and music you’ve never heard, but cut to pieces, in different orders, arrangements, styles, speeds and colours. It’s a mash-up album for those with attention-spans that can only be measured in nano-seconds. Credit to anyone who can recognise everything in this; some of it is so utterly baffling, remixed to hell and at times uncomfortably schizophrenic, agitating and splintered. BUT it’s guaranteed to make the dancefloor at your end of year party a mess of disorientation and hilarity.

Everybody get into position right now for Bodies Hit The Floor You want to hear the band that Andrew Elstner from Torche was in before he joined the sludge-pop pioneers don’t you? Yeah? GOOD. Conan the Barbarian fanboys, Riddle of Steel are the kind of band you hear and think “I want to go to there” and THERE is being in Riddle of Steel. Got This Feelin’ is everything that’s great about a band that sound like the laid-back, cool stoner who listened to Cheap Trick instead of Sleep. Just listen to how crisp, how luscious, how deliriously warm the bass tones and drums sound on this, coupled with the poppy-scrawl of the guitars. Why the FUCK haven’t you bought this yet? Best album ever.

(n.b. Andrew Elstner also plays in a band called TILTS who are totally rad as well.) An apt title it seems – Teenage Rampage is a loaded blast of energetic, caterwauling and hip-shaking good times. Dangerous! are from Australia and channel frantic party-time punk rock, fuzzy guitars and beer-swilling anthems. Note: this is one dimensional as hell – they dip into the odd-synth break now and then (see the keyboard-punk Chasing The Girls) but for the most part it’s a jangling, rush of overdrive and endorphins. Vocalist Lofts (who has sadly left the band now) sounds like he’s channelling Daryl Palumbo‘s expressive and unique singing voice mixed with yer man from Letlive. Teenage Rampage is a blisteringly scrappy and joyful hit to the senses and far too damn catchy for it’s own good (see Nightmare, Leper and Huzzy for more persuasion).

Watch the Grim Reaper getting his drink on at a party for Movers N Shakers. “Say, I never had it said to me either way…’come, join us’…or don’t. But I think it’s don’t, please” states Bluetip vocalist Jason Farrell who sounds like he’d rather be anywhere else in the world than stuck in a room with you bunch of clowns. The choppy, irregular guitars on this title track bring to mind the bending noise of Drive Like Jehu, whilst Farrell’s cutting words channel snark from every angle. This is solid Dischord punk rock, from the sharp blast of opener Yellow Light, to the jagged spit of the destroyed relationship on Castanet and the clattering, spoken-word rant of F- (“stands for fucker”); Join Us is an agitated jerk of spite and cutting scorn.

Listen to F- and issue a formal apology to everyone involved.