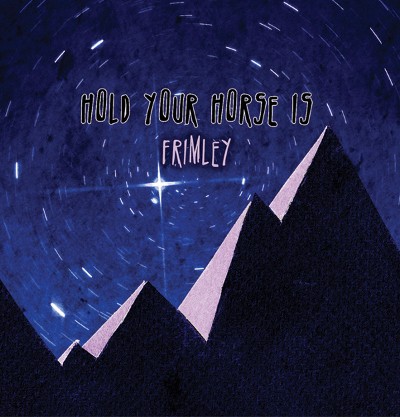 Band â€“ Hold Your Horse Is
Album â€“ Frimley
Label â€“ Apres Vous Records
Release date â€“ Out now
Sounds like â€“ The Hold Your Horse Is twitter picture is a dude wearing a Tyrannosaurus Rex mask, playing air guitar.
–
I first heard Hold Your Horse Is through Big Scary Monsters. â€˜You Show Upâ€™ was the track and on the strength of that rather mighty and meaty blast of sweaty, raucous, rock and or roll I purchased â€˜Ramminâ€™ It Homeâ€™ â€“ a damn fine EP/CD-R thing.

Finally, this power-trio of equines have got a debut album under their belts, and richly deserved as well.

Like the EP before hand, â€˜Frimleyâ€™ has a seriously sharp cutting edge. The 11 songs that make up this release have a crisp, â€˜be careful with that bladeâ€™ type quality about them. It must be the production from Gordon Mills, who seems to have brought out the best in all 3 instruments, which seem so clear and striking on every song. Too polished? No, not really. Just because everything can be heard, doesnâ€™t mean it isnâ€™t roughshod.

Opening track â€˜Mumblerâ€™ starts with a barrage of discordant, clashing chords and pounding drum beats, before morphing into a breakneck punk attack. Vocalist Robin Pearson has that light, sneering delivery with tongue planted firmly in cheek. His tone is mysterious to begin with, but when we get to the roar of â€œAAAALLLLLRRRIIIGGHHHTTT!!!â€ we know he just wants to release frustration. For some reason, this weird friendly-meets-snide delivery fits the music so well. Itâ€™s one helluva opener.

â€˜Forgive and Forgetâ€™ tackles post-hardcore head on, mixing sporadic drum beats, huge crashing choruses and Pearsonâ€™s frustrated bark. The change of speeds and angular guitar breaks give a nod to Meet Me In St. Louis, whilst the heavier and more taunt moments are more in line with twisted, 90â€™s style, alt-rock.

‘Title Trackâ€™ is 83 seconds of blink-and-youâ€™ll-miss-it scything blast of frantic hardcore energy. Seriously, if Pearson went all Hatebreed over this, it could sit comfortably as a minute-long mosh-pit anthem. Instead, he blends a ravaged, strangled cry with his trademark delivery that gives a massive nod to Reuben and it sounds fucking ace. â€˜The Exitâ€™ follows nicely as a blast of stuttering, bass-driven, riff-splattered blast of tuneful, yet noisy punk rock.

â€˜Everythingâ€™s So Mundaneâ€™ also gives a nod to the Surrey 3-piece, fusing heavier moments with that post-hardcore edge, but with a harsher, more discordant guitar tone that rings with menace.

â€œListen, closely, so closely that all other soundâ€¦.becomes invalidâ€¦ free of distraction, free of corruptionâ€¦â€ Pearson chants â€œon â€˜Absurdâ€™. Are these instructions? Hold Your Horse Is are giving you the option of listening to this â€“ make everything else illogical. On the strength of â€˜Absurdâ€™ youâ€™d be a fool to disagree. Thereâ€™s a weird sinister vibe running through this track; it might just be the creepy bass plucking that dominates this. Even through the racket of the ludicrously tight drumming, it still feels chilling.

Tribute to Neil? Lyrically, â€˜Buchananâ€™ possibly accidentally references making an Art Attack out of a bunch of skipping ropes, yoghurt pots and penny sweets but we can dream. Strange Million Dead vibe to this, circa â€˜Song to Ruinâ€™ era-musically and vocally itâ€™s delivered in that same aggressive style and the sudden quiet moments are tuneful and longing with trepidation. See from 3.20 onwards, for the big-rock wig-out mode.

The final track, in the slow-burning form of â€˜Tonguesâ€™ is a nice nod to Hell Is For Heroes for timely pacing and a build to a fitting and raucous crescendo that mellows to some nice muted, guitar plucking, which is in start contrast to the abrasive opener.

â€˜Frimleyâ€™ is a heart-racing, 41 minute shred of energized, post-hardcore that will transport you back 10 years, when bands sounded this passionate, this vital and so direct in their song writing. But this is the now, and if Hold Your Horse Is can make emotive, punk rock sound as good as it did back then; they deserve your full support â€“ a cracking debut â€“ get your copy right here.