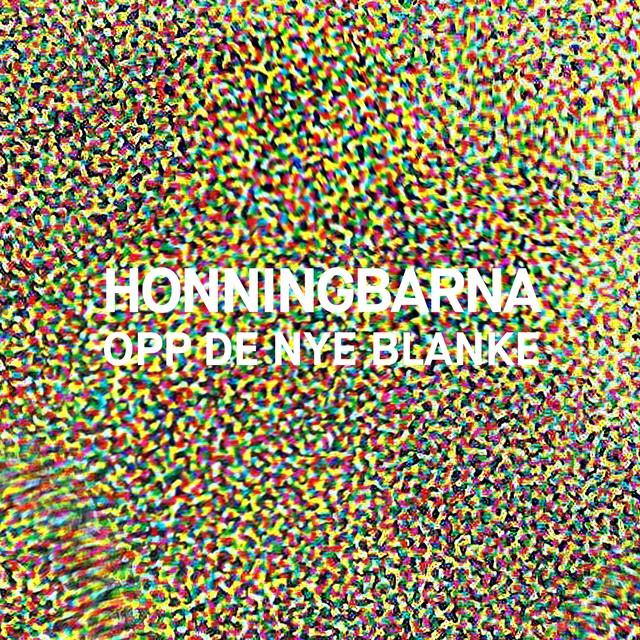 Two years ago, Honningbarna released the album Verden Er Enkel, an album I frankly, couldn’t get enough of. It was everything that modern punk rock should be, sung in a Scandinavian tongue and while I couldn’t make out anything cello-totting vocalist Edvard Valberg was saying, it really didn’t matter because the music was so breathlessly brilliant. Like Refused ripping through Zeke songs, it was a wild, untamed middle-finger salute of anarchy and songs about wishing Jesus a merry Christmas, to telling art to fuck off and chanting “Niki Lauda, Niki Lauda!” over and over.

Opp de nye Blanke (Up The New Shiny) is a strange one – clocking in at a very, very brief 14 minutes, it’s less of an album and more of an EP of sorts. From the feedback-drenched opener to the scatter-gun blast of Støy støy overalt (Noise, noise everywhere) Honningbarna don’t hang about. This is a frenzied, desperate annihilation of punk rock and it falls over itself to reach its breathless, rasping conclusion.

Like Heart Attack American from the first The Bronx album, Opp de nye Blanke erupts forth in a brutal and direct fashion – the layer of scraping, dishevelled guitar-feedback is a scrambled roar of an attention grabbing face-punch. The off-kilter guitar wine (that is reminiscent of fellow Norwegians, Kvelertak) shrieks through, whilst vocalist Edvard, spits forth a stream of Scandinavian prose in rapid and rabid progression. The accelerator pedal is well and truly floored on the next track, lead single, Prinser Av Sarajevo (Princes of Sarajevo) – a spirited punk rock attack of three chords, handclaps, backing vocal “whoah-ohs” and garage-rock brashness. It’s direct, blunt and full of fire and mic-swinging glory that was present throughout Verden Er Enkel, showing that whilst Honningbarna’s sound hasn’t changed much, their determination and ability to write incredibly tight and zealous punk music burns brightly.

A sample of Robert Oppenheimer’s Krishna quote (“I am become death – destroyer of worlds“) opens Vi Kilner (We Make Out) and instantly the tone of Opp de nye Blanke shifts. The dark and grumbling bass and drum combo simmers beneath Oppenheimer’s words, making way for Edvard’s mournful cello before breaking out into those well-known vocal diatribes and dramatic-sounding hard-rock, completed with a chanting mantra of a chorus and a sense of foreboding. On the other hand, Honningbarna er din Venn is (Honningbarna is your Friend) is positively upbeat – throwing trumpets into the mix (making this sound like some weird and lost Rocket From The Crypt-track) spoken-word segments and a fist-pumping chorus of delight. Icarus/Hykler (Icarus/Hypocrite) sounds like The Hives completely smashing the place up – it’s pop-rock exuberance; grinning from ear to ear, whilst the rousing cello-break gives everyone a chance to get their breath back before launching into a churning smackdown of Hot Snakes-post-punk.

The best track however, is the getaway-driving thrash of Støy støy overalt – a barrage of clattering, scuzzy-punk rock guitars and brusque rapid-fire vocals all tightly packed into a glorious head-rush of frantic craziness of colliding riff-soaked chaos. You can almost smell the sweat on this track – it’s overflowing with scrambled, amp-jumping joy.

Opp de nye Blanke isn’t without its faults (I don’t get the 29 second sample entitled Bob Munden) and it’s briefness leaves you wanting more; however, Honningbarna are showcasing that they can write addictive and passionate punk rock with ease and they absolutely thunder forward with the kind of youth and determination that shone so brightly on  Verden Er Enkel.