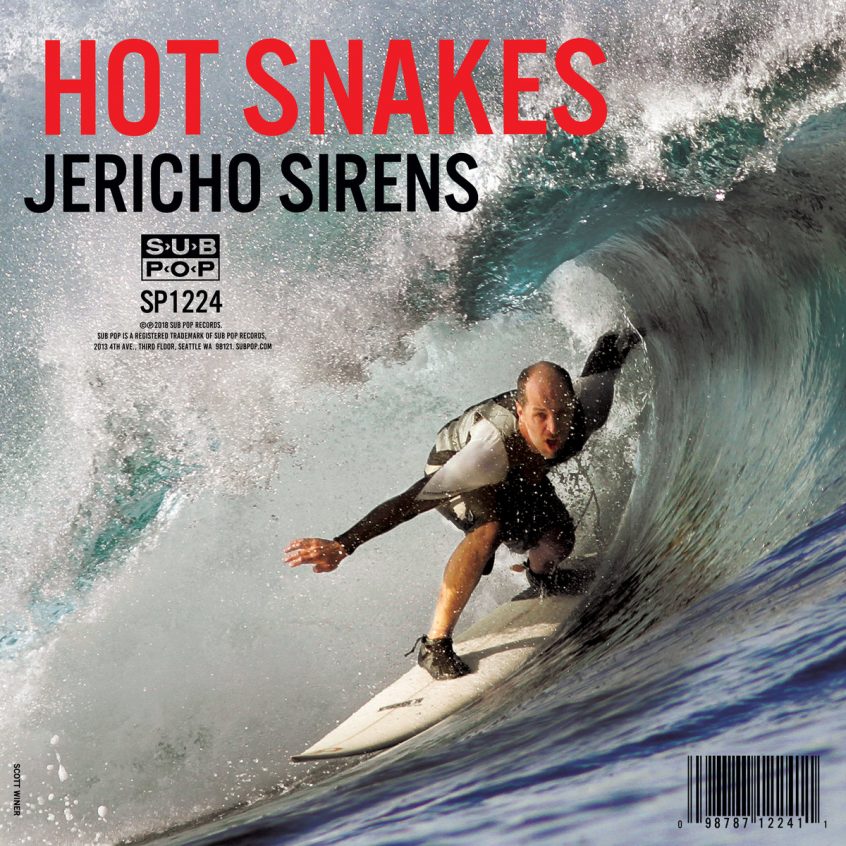 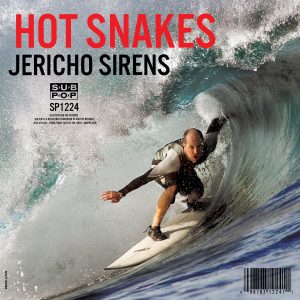 Everyone, Hot Snakes are back, and not just in pog form! I cannot tell you how much I’ve missed this sound. With Obits, frontman Rik Froberg retained some of that tense, scattergun guitar noise, but without his partner in musical crime, aka John “Speedo” Reis, it just wasn’t the same. Couple their six strings together and you get something that apparently owes lots to The Wipers – add in Gar Wood on bass, Jason Kourkounis and Mario Rubalcaba on drums and you’ve something truly incredible.

Whilst Jericho Sirens is typically a Hot Snakes record, time has obviously honed this well-oiled machine, (14 years to be precise) and you’ve something that takes elements from all their past records – the ripping chaos of Automatic Midnight, the experimental darkness of Suicide Invoice and the meaty crunch of Audit In Progress. So, it’s the perfect Hot Snakes record, right? I’m not saying that, but neither am I saying it isn’t. With Speedo’s Rocket From The Crypt touring, releasing mysterious 7″ records, and his and Froberg’s Drive Like Jehu teasing us with sporadic shows, having Hot Snakes back is mouth-watering to say the least.

Jericho Sirens is a bludgeoning, dangerous and deadly beast of a record and the 14 years have been well worth the wait – you need this in your ears right now…

Jericho Sirens opens with the shrieking, stocky guitars of I Need A Doctor, which sounds eerily like If Credits What Matters I’ll Take Credit from their debut, but at a slower speed, but with more seething bile, courtesy of the pipes of Froberg. Time hasn’t weathered those vocal chords one bit – it’s still that same scrappy, raw, hacking sound, especially the way he roars the song’s title “I need a doctor/Tell me what I’m gonna do? I need a doctor/One you can direct me to?” As an opener, it scorches the land with this shredding, wailing caterwaul of the twin Swami-guitars not to mention the howling synth lines echoing in the background. The pace then takes an erratic jolt on the chopped up stagger that is Candid Cameras; percussion is disjointed, irregular and overtly complex, giving nods to the lurching post-punk of the aforementioned Drive Like Jehu which should please fans of the math-rock titans.

Hot Snakes don’t want you to feel any sort of comfort or relaxation though – oh no. Despite them perfecting this particular sound, you would think “okay, I know what’s coming” but you really have no idea – it’s the way they manipulate and attack their sound that sets it apart. Take the 78 second burst of noise that is Why Don’t It Sink In? – it’s pure thrash-trash punk fury, urgent, breathless, sweaty and destructive. It seethes with teeth-gnashing urgency and spitting venom and seems to be in a race to reach the sudden exhaustive conclusion as it smashes into the wall and owes a lot to the speed that made their debut, Automatic Midnight, so vital and vibrant.

The surf-rock vibes on the radiant Six Wave Hold-Down perfectly encapsulates the cover of Jericho Sirens (Gar Wood catching a rip curl, right?) and brings to mind the snarling, tense punk of their work on Audit In Progress, whilst the summer-punk rock of Death Camp Fantasy, has the brilliant call and response from Froberg in the form of: “Have I, been preyed upon? EVERYBODY!” queue the rest of the band screaming the words back at him. There’s your fucking crowd favourite right there.

There’s many of them on this, but the standout track has to be the weighty heft of the title track. As the harmonica creeps in (hello I Hate The Kids) as do those lurching, staggering riffs that don’t let up during this 4 minute barrage of dark, menacing, but upbeat fortitude. Chances are you will have Froberg’s words of “Jericho Sirens, I hear…” firmly ear-wormed into you head by the track’s raucous and punishing conclusion. Easily one of the best songs they’ve ever recorded – up there with Salton City and 10th Planet for sheer heaviness and crunching power.

The ripping chug of the incandescent Psychoactive bristles with hair-raising power-chords and those trademark churning, rolling, finger-bleeding riffs – meaning you’ll be grinning from ear to ear on this one, especially every time Froberg yells the words “I WANT SUCCESS!” – cracking. Jericho Sirens closes with the rambunctious salvo of Death of a Sportsman, a bouncing, scrappy punk number that gives huge nods to Let It Come in structure, with Gar Wood’s booming bass thundering the track forward, backed by the solid drumming power of Kourkounis and Rubalcaba. It’s the sinister guitar lines that haunt this in the background though – coupled with the return of the squealing harmonica and the foreboding suzzy-punk rock drive.

Hot Snakes redefined punk for me when I first discovered them in 2004, and remain an important, volatile and deadly combination of razor sharp guitar lines, sardonic lyrical couplets and brutally fast rhythmic punches to the face, gut, hell the entire body. Jericho Sirens is a bludgeoning, dangerous and deadly beast of a record and the 14 years have been well worth the wait – you need this in your ears right now.

You can purchase Jericho Sirens from Sub Pop or stream via bandcamp below.