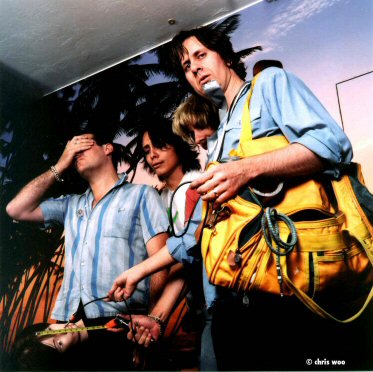 One gig that was a particularly important moment in my life as a music lover happened about 2 years ago. It was back in 2005 where San Diego’s Hot Snakes played their last UK show at Camden Underworld. It was an emotional time for all involved and possibly one of the finest live performances I’ve ever seen, despite vocalist/guitarist Rick Froberg being very drunk on Tequila and walking off at the end of ‘Luau‘. The band went on to play several shows in Australia, record a live-studio album at JJJ radio station and then split, never to return. Their demise was perhaps expected. Rumours of tension between band members littered internet forums and when the announcement came of the break up, it was accepted with a grim smile.

Hot Snakes started life as a side project for lead guitarist John Reis during his time off from his most popular and long serving group, Rocket From The Crypt. Around this time, Reis set up the Swami Records label. The initial Hot Snakes recordings came from Reis working on tracks with former Delta 72 drummer, Jason Kourkounis. He then contacted former Drive Like Jehu band-mate, Rick Froberg as vocalist and the first Hot Snakes album was born in the form of 2000’s “Automatic Midnight‘ a stripped down, volatile and extremely abrasive punk rock record.

Gar Wood joined the band as the permanent bassist for touring duties and recorded on the band’s follow up album, “Suicide Invoice‘ in 2002. Their second album was a more experimental and “cleaner’ affair – utilising organs, more melody and darker lyrics. In 2004, Hot Snakes released their final studio album, “Audit in Progress‘ to critical acclaim. This album would feature Mario Rubalcaba on drums in place of the departed Jason K. It was possibly the band’s biggest and noisiest album, and won the “best punk album‘ award at the San Diego Music Awards. A music video was made for the opening track, “Braintrust.‘

They went on to record one of the last ever John Peel “Peel Sessions’ Eps, which featured 2 tracks from “Automatic Midnight‘ and “Audit In Progress‘ respectively.

After an amazing UK tour (well, the few dates they played!) The band announced it would split and after recording the “Thunder Down Under‘ for JJJ radio. They also contributed cover of the Government Issue song, “Time To Escape‘ to the Tony Hawk’s American Wasteland computer game.

The band are highly regarded in Indie music circles, somewhat down to the imposing figures of vocalist Rick Froberg and John Reis, both who served time in the legendry Drive Like Jehu. At the end of many of their live sets, Hot Snakes would play both “Bullet Train to Vegas‘ and the 9 minute epic of “Luau‘, both which appeared on “Yank Crime‘ an album that any aspiring guitarist should own.

The impact Hot Snakes had on punk music was a revelation. It was a wake up call to show that not everything had to be the same formulaic rehash of the same three chords. It challenged the listener with its gritty and layered sound, snarling vocals and chilling atmospherics. They were a raucous, rollercoaster ride of a band that kept strictly to the staunch DIY approach of many other Independent labels and acts at the time.

Rick Froberg – is continuing his work as an artist and illustrator (Rick worked on all the artwork for the Hot Snakes albums and for many Swami Records releases.)

John Reis – after disbanding Rocket From The Crypt and The Sultans, John worked on Swami Records for a bit before announcing he’d started a new band called Speedo, featuring ex-members of Hot Snakes (see news item).

Click below to experience the only official Hot Snakes video for the song, ‘Braintrust‘. Enjoy!

By Ross Macdonald (with thanks from Hot Snakes wikipedia page!)