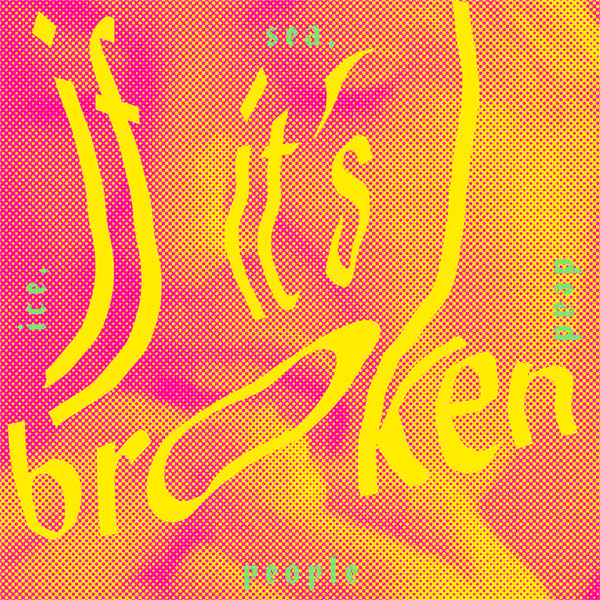 BandÂ  – Ice, Sea, Dead People
AlbumÂ  – If It’s Broken, Break It More
Label – Lost Toy Records
Release date – April 22 (digital), May 6 (physical)
Sounds like – Liars, if they went back to being a punk rock band and not singing about witches.

Apparently recorded live to tape by Tim Cedar (Part Chimp) and Patrick Constable (Selfish Cunt) â€“ If It’s Broken, Break It More drips with raw aggression, buzz-saw guitars and rattling, dilapidated drum beats. The vocals are barked with equal disgust and scorn, flitting between the howl of The Blood Brothers and the wailing cries of Tom Hudson from Pulled Apart By Horses.

If It’s Broken, Break It More lives up to it’s moniker. This is one jagged, spiky and smashed collection of songs. Diamond Swords stumbles and clatters past like a Hot Snakes track on caffeine; guitar lines jerk with spasmodic ticks and twitches, whilst the bass is an uneven and bending drone, opting for light melody around the minute mark, before tearing back into twitching, exhausting punk. Ultra Silence is all squealing guitars, throaty shouting and odd-time signatures, that breathlessly rushes to a satisfying and messy conclusion of amps collapsing and guitars being thrown in the air.

You Could Be A Model is pure splatter punk – distorted, jagged guitars executed in the style of early-Blood Brothers (think Rumours Laid Waste spazz-rock), garbled overlapping vocals, background wails and jarring drum beats. Fantastically erratic and unhinged in every way possible. Styes In My Eyes is pure first-album Liars and is utterly demented, warped and disturbing through and through, from the grotty bass-heavy drive, to the odd-ball vocal yelps.

The ultra-heavy bass pounding of ‘holding out for a combo-breaker’ I Found A Way, is intense, dread-inducing and frantic. The hypnotic repetition of the title track is somewhat nerve-inducing, as is the direct and brutal rhythmic punk rock rush, which is stretched to a maddening breaking point. Accept the Mystery and it’s off-kilter drumming is also another highlight – tight, squealing guitar lines hold together the ramshackle percussion and the stuttering, spoken-word vocals.

The rapid nature of their sound is best exemplified on Pro Life, Forever; a tweaking, stammer of thumping bass ‘n drum pounding, screwed up, choppy guitars and a Johnny Whitney-style yell of ‘WE’RE COMING TO GET YOU!’ Follow-up track Apropos extends this to breaking point, with scrambled, nonsensical lyrics over a wave of distorted Mclusky-style, chewed up noise-rock which is devastatingly chaotic.

Title track If It’s Broken is one of the weirdest songs on offer – the art-punk element is toned down, for a more direct and dare I say, tuneful respite that feels like Les Savy Fav if they stood still for just over 3 minutes and actually played their instruments rather than cross-dressing and trying to climb over your face. It also kind of sounds a bit like Argument-era Fugazi, which can only be applauded.

Snotty, brash and uncomplicated; If It’s Broke, Break It More is a disjointed, mischievous slice of dishevelled, noisy punk rock and a superbly hectic and fun listening experience – get on it immediately.

Sidenote: is that Nadine Dorries chowing down on marsupial balls on the album’s cover? Amazing work!