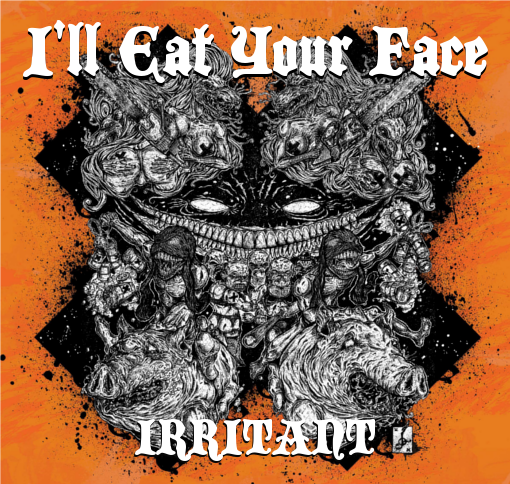 Anyone thinking of starting a band shouldnâ€™t for 2 reasons:

1.Ã‚Â Ã‚Â Ã‚Â  Thereâ€™s too many bands; theyâ€™re like crap z-list celebrity biographies â€â€œ numerous, soulless and mostly pointless.
2.Ã‚Â Ã‚Â Ã‚Â  No-one is ever going to create a name that rivals Iâ€™ll Eat Your Face, which is possibly the peak of when it comes to thinking of a hilarious and memorable moniker. The only thing close to this would be Howling Spastic RailwayÃ‚Â©, but thatâ€™s copyrighted to me so you can go to hell.

Iâ€™ll Eat Your Face are two dudes from Cork, Ireland with a sound that equates to an army of players rather than the minimalist membership theyâ€™ve opted for. Itâ€™s the kind of racket that straddles genres, not content to jump waste deep in any definitive lot, but rather adopt a pick-n-mix approach to their defining sound. The core however is built most definitely around grind. Iâ€™ll Eat Your Face are all about the bone-shattering assault of blast-beat drumming and sickeningly twisted riffs that either squeal with crazed delight or bottom-out with a gurgling roar.

‘Irritantâ€™ is the bandâ€™s first ‘properâ€™ album â€â€œ and surprisingly, itâ€™s free! Well, free if you have an internet connection and the ability to load and save around 63MB of a zipfile. Itâ€™s brief â€â€œ clocking in at just over 23 minutes, ‘Irritantâ€™ decides that hanging around is for pussies; bludgeoning the listener to a mashed-up pulp of a bloody rat carcass drenched in piss is the safest bet. Opening track ‘Tonyâ€™s Coming To Massage Meâ€™ starts with a crackling, lo-fi recording of a quite tuneful set of chords that are eradicated when the drums break through, punching the lead back into the six-string and cranking the volume to necessary threat levels of extreme noise. From here on it see-saws between grinding fury to a bouncing rock-stomp; switching sides when you least expect it. Totally fucking ridiculous, but disturbingly compelling. ‘I Have A Wolf For A Headâ€™ touches upon Dillinger Escape Plan-style jazz-chords; the guitar hacks a ragged, chewed sound over the frankly outlandish but brilliant drumming style.
There are no vocals â€â€œ which is somewhat of a blessing, as the sound of some fat bearded shower-dodger roaring over the top would severely distract from the music of Mr ‘The Boyâ€™ Guitar and Mr ‘Barrytronâ€™ Drums. Although I canâ€™t help feel that having someone bellowing â€œEYES FULL OF SHHHHHHHHIIIIIIIIIIITTTTTTT!!!!!â€Â on the very song itself, would raise a smile. But really though, this slays regardless â€â€œ the scrambled rush as drumbeats fall over each other in an effort to keep up with the scything guitar sweeps completely owns the Iâ€™ll Eat Your Face sound. ‘Really Long Armsâ€™ features a nice jazz-meets-trippy, ‘cover-your-ears-and-youâ€™ll-miss-itâ€™ mid-section, but is mostly dominated by such pummelling riffage and the kind of short passages of blasting hardcore that give nods towards Botch and the despondent snarl of Black Sheep Wall. The schizophrenic buzz that makes up ‘Pecks From Hellâ€™ staggers between a grinding howl and sludge-covered scrape of harrowing drone; whilst ‘Internal Mind Discoâ€™ is like being stuck on a waltzer with Napalm Death covering a Bolt Thrower track, minus Barney Greenway. Donâ€™t be fooled by ‘Loser: Onâ€™; whilst the wrong-footer opening of twee percussion and patterned bleeping if a brief pause from the chaos to allow you your breath back, Iâ€™ll Eat Your Face decide to deliver some of their heaviest, most barren material inside a minute and a half of twisted, furrowed noise that chugs with a stop-start urgency and a panicked rhythm. Likewise so does the Simpsons approved, gag-inducing ‘Rat Milk Moustacheâ€™ â€â€œ a track that churns with squealing determination and menace.

Stand-out track is the excellent ‘Six Miles Inâ€™, the only piece to feature vocals; albeit unintelligible ramblings fed through a vocoder, alongside buried screams and that sense of uncertainty created by the disturbing ‘tauntâ€™ of the guitar and drums, which seem almost mocking in their tone, pointing invisible fingers at the listener and berating them, like their target is a sibling of the girl who smelt of spam and by default, is ripe for derision.

‘Irritantâ€™ is plain nasty â€â€œ the drums batter you into submission; the caustic riffage dips between a blitzkrieg of pure grind, math-punk distortion, grime and stoner rock. Iâ€™ll Eat Your Face constantly keeping things interesting with their irregular time changes, witty song titles and a furious heaviness that in some cases, feels like youâ€™ve entered a fight that youâ€™re most definitely going to lose.

Iâ€™ll Eat Your Faceâ€™s debut ‘Irritantâ€™ can be downloaded from their bandcamp site for free here. Also, check out the split EP they released with Hands Up Who Wants To Die.