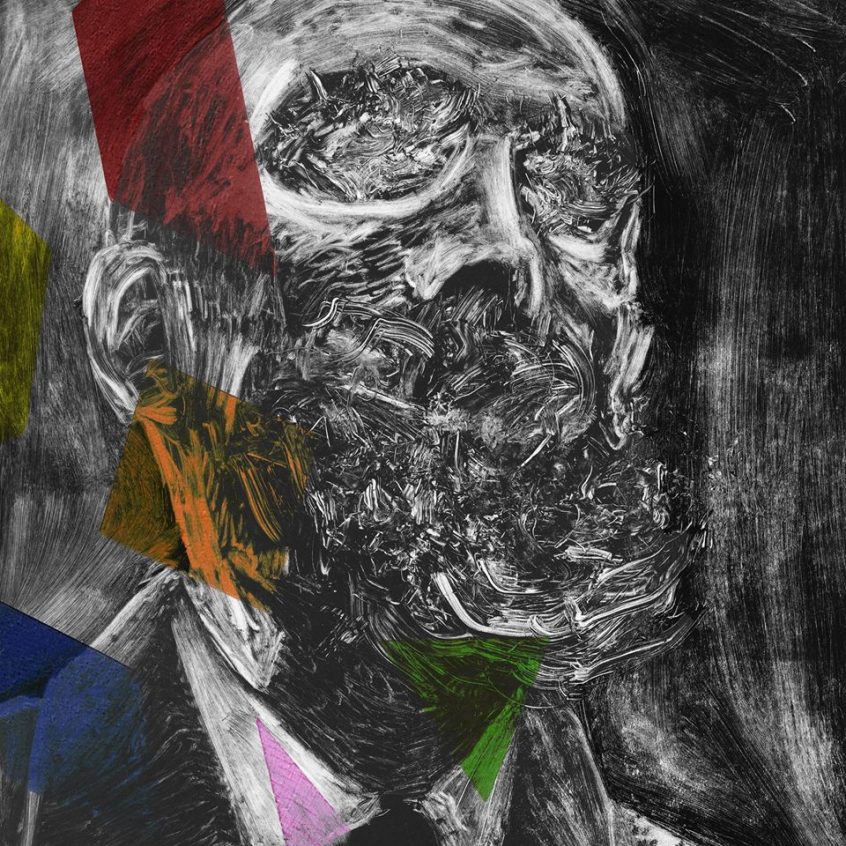 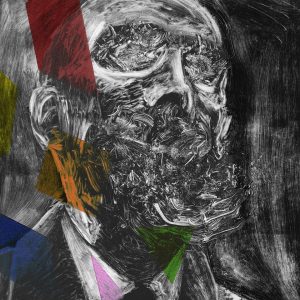 Band: Irk
Album: Recipes From The Bible
Label: ?
Release date: 7 December
Sounds like: Trapped in hell. Fighting over the good book. Leeds in the Carpenter dimension.

My word, that album cover (by the excellent Vebjørn Pedersen) looks like it was created during a bad acid trip. Incidentally, Recipes From The Bible sounds like it was recorded on a similar hallucinogenic cocktail by Leeds three piece Irk, who aren’t happy with…well what have you got, because I’m sure they’re angry about it. Recipes From The Bible was a recent Kickstarter-type launch through Indiegogo, but has now seen the light of day on Bandcamp, which is nice.

With only drums, bass and a voice in the mix, you may think Irk’s sound would be a bit sparse. Far from it; due to their lack of a guitarist, everything else is given room to breathe and boy does is take great sucking gulps of air, belching them back into your face with disgust. Vocalist Jack Gordon, is a seething, writhing mess; bassist Ed Snell drags this slab-heavy dirge of chunky, riffage along for the ride whilst drummer Matt Deamer dismantles his kit with punishing power. Irk’s skill lies in their unpredictability though, the quick one-two punches can be choreographed, but it’s the backflips and leg sweeping moments that are truly devastating (and exciting).

“Walking in a straight….LIIIIIIIIINE!” roars Gordon on opener I Bleed Horses, as all holy hell breaks loose. The rhythmic pattern that plays beneath his screams, tumbles and rolls all over itself, clamoring for space, whilst the monstrous and fiery diatribe of bile tears and writhes with uncontrollable rage. The savage and snapping Life Changing Porno continues down this path of twisted, breakneck chaos. Screams of “I’m dead, Nothing matters now that I am flowers” is oddly poignant, whilst the guest vocals from Kelly Bishop add a malevolent and caustic snarl to proceedings. It almost dips into metal territory in the closing 30 seconds, as Irk throw everything into their storming, ramshackle attack.

Favourite moment of the near-7 minute malevolence of The Observatory? Probably vocalist Jack Gordon screaming the track’s title with Patton-esque excitement and an almost drunken drawl, whilst the thunderous four string lays waste in such a brutal, thumping fashion – oof! It’s not all blistering horror though, there’s time for some groove on the excellently titled Insect Worship – a hip-shaking descent into a storm courtesy of that crucial and crunching bassline. This is what I imagine a stripped back Faith No More would sound like going full Cuckoo for Caca – scary and teasing, especially the distorted saxophone outro.

Speaking of brass, the saxophone (courtesy of Miles Spilsbury) emerges more on the disjointed scrawl of You’re My Germ, a jaunty, jazz-noise strut of intoxicating sounds. This brings to mind Norway’s The Thing and Wikipedia-copyists, Down I Go in the math-rock stakes. It’s also wickedly heavy, a crunching, bludgeoning jam of jarring, stuttering noise.

Whilst Spectre at the Fiesta might be the most ‘accessible’ track on …Bible, it still completely melts faces. One of the fastest tracks on this debut, it’s as if Irk cannot wait to finish, vocals are spat at a rapid and rabid rate, whilst the bass gurgles with a howling dance-rock intensity and the computer game glitches spin and twirl in the mire of savagery, especially during the shouts of “NEW FASHION! NEW FASHION!”

The snarling decay of The Healer is a murky piece of shuffling noise, with a weird mixture of ranting spoken-word disgust, mashed up with some bellowing screams, whilst Cibo per Gattini keeps snapping over and over, getting progressively heavier and darker, especially when that saxophone kicks in again, leading you down the garden path of depressing prog-metal-jazz-fusion. Closing track, Pounds Per Square Inch pushes the disjointed noise-rock template to the limit; I’m surprised the bass strings don’t snap on this, due to the punishment bestowed upon them. It’s the closing diatribe, of a weird hum and vocalist Jack Gordon’s final cutting words “I told you I would make you laugh” which are uttered with barely concealed contempt. Game over.

Deliciously uncomfortable seems to be Irk’s mantra and they manage this over the course of this 9 track slab of warped, snarling wreckage. Recipes From The Bible is born from anger – Irk make disconnected, ugly, volatile noise rock fed through the despair machine, splattering the innards all over your face. You need this in your life, a cleansing, cosmic swing of lunacy juice fed through a spectrum of tripping terror.

Stream a selection of noise from Recipes From The Bible by Irk below. Their album release show destroys your ears on 7 December.