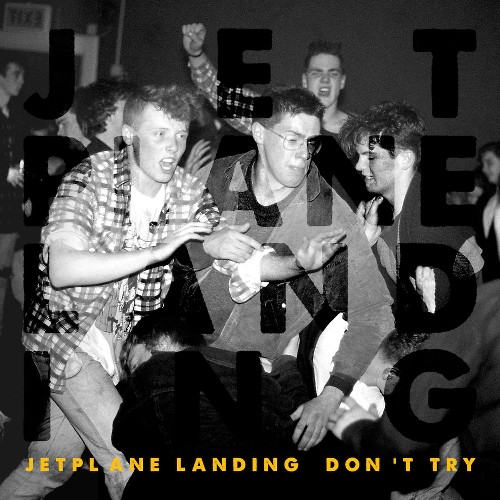 Band – Jetplane Landing
Album – Don’t Try
Label – Smalltown America
Release date – Out now
Sounds like – Bones of our fathers, maggots (getting off my turf), magnetic sea pulling me under, a Jetplane Landing.

(We all say!) My radio heart, will come to no harm.

Six years hasn’t done anything to dampen Jetplane Landing‘s enthusiasm – far from it. The energy levels, much like those on Backlash Cop, are through the roof and orbiting a space station on their 4th album, Don’t Try. From the heart-racing post-punk of Cheapskate Tricks For Worn Down People to the crunching, bruiser of Magnetic Sea; it’s an absolute blast of wild, emotive raw power. In an interview we conducted with vocalist Andrew Ferris back in 2007, he stated that Backlash Cop was made to be played live – if so, it best be on a co-headline tour with Don’t Try as it’s tag-team partner then.

You see, Don’t Try is over-spilling with lyrical tit-bits that are begging to be bellowed in some sweaty basement. Take the punk rock fury of the second track, Beat Generation…Ha! a thundering barrage of discordant, choppy riffs and gleeful handclaps, with the phrase “hey, maggots get off my turf I wrote shit like this fucking years ago!” erupting from vocalist Andrew Ferris with equal amounts spitting vitriol and maniacal gusto. The driving, metallic chorus, is yet another example with Ferris telling the listener quite frankly that “to suffer for art, it’s the dullest part” – it’s an absolute stone-cold anthem of spirited, acerbic jubilation.

Songs like aforementioned album opener, Cheapskate Tricks For Worn Down People are just as raw and focused, with Ferris adopting his soapbox rallying battle cry with the delightfully non-sequitur of “Jean Rhys promised me that ring, so why are you wearing it at this funeral?” which is spat with indignant maniacal fury, as is the line “damned magic, ex-slavers” which is filled with snarling contempt.

The wonderful My Radio Heart wears Jimmy Eat World melodies proudly on its sleeve and just might be the most life-affirming and brilliant 3 minute pop-rock song you’ll hear all year. Ferris’s cry of “WE ALL SAY!” is, as the lyrics state, a “blast of wild joy” and it’s an infectious, spirited cry of of undying love for music. The metallic scuzz of the guitars on the epic Walls Of DerryÂ are brimming with ardent and zealous power. There’s sweat, grit and teeth-rattling directness channeled into this 4-minute caterwaul and the scratching, bluntness of Ferris’s vocals are brimming with fire. Cortez and Columbus draws comparison’s with their earlier work, especially This Is Not Revolution Rock from debut album, Zero For Conduct – the rich melodies, pop-rock tempo, dance-punk coda and tender, crisp production.

The Lightning Bird Blinded By The Moonfire gives a nod to the experimental styles that dominated Backlash Cop – the bass and drum opening scrape is a somewhat sinister, frothing build, that blossoms into a vibrant Technicolour of delirious guitar-licks. This is rounded off by some spirited rap-rock in similar vein to the ranting of Zach de la Rocha (about a contact deal that went sour), some unexpectedly brilliant, yet mournful piano before blasting back into the loud, kaleidoscope of cracking energy.

Skyscraper hooks dig in deep on the raucous and driving bounce of Broken By People – thick, tuneful riffs hit home with vibrant, wild power, whilst Ferris switches from a ranting, spoken-word tirade to some wonderful harmonies that sit nicely alongside those of guitarist Cahir O’Doherty. The off-kilter nature of Man With A Movie Camera Trapped Inside His Head (epic song title is epic) channels post-hardcore and yet another hook-laden poppy chorus, with some choppy, angular riffage for good measure.

“Carrying our songs as totems, city after city fell…” barks Ferris on the stamping album closer Magnetic Sea, a stark an anthemic blast of Helmet-esque metallic rock, that builds layers and layers of scrawling, scuzzy guitars over tight-pounding drumbeats – it’s a breathless, exhilarating assault with live favourite held high upon a pedestal.

I envy all those who gets to hear this for the first time, I really do. As far as essential rock albums go this year, Don’t Try should be at the top of your list. This is nothing short of an incredible return after six years of silence – Jetplane Landing have made the album of their career and also my album of the year; simply stunning – I cannot stress how much you need this in your collection.

Watch My Radio Heart here and then buy the album.

All those throat-tearing consumers, their money means nothing now.