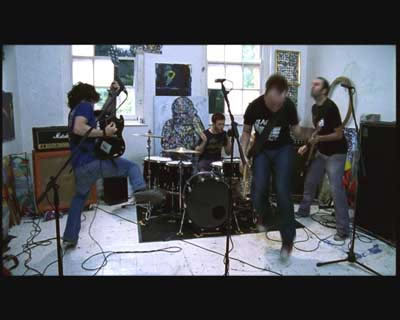 It is criminal that not enough people know about Irish rockers Jetplane Landing. They are one of many bands I constantly champion to people, but it always falls on deaf ears; the fools.

Embracing the DIY ethic like a long lost loved one, Jetplane Landing play strong hard edged rock music, with dips into elements of punk and more recently, funk. They formed as a 3 piece in 1999, taking their name from an observation made by a friend of the music of El Paso defunct-punk band At The Drive-In. (The friend remarked that ATD-I sounded like â€œÃƒÂ¢Ã¢â€šÂ¬Ã‚Â¦a Jetplane Landing.ÃƒÂ¢Ã¢â€šÂ¬Ã‚Â) Debut album “Zero For Conduct’ was released in 2001 on their own label, Smalltown America records and was followed by the “Els Quatre Gats EP’ in 2002. The band soon became a 4-piece with the introduction of guitarist Cahir O’Doherty and they made big waves in 2003 with their sophomore effort “Once Like A Spark’, which was a far noisier and heavier approach (and was quoted as the “perfect modern rock record’ by Metal Hammer magazine) compared to ZFC’s mellow sensibilities.

Due to the band’s charitable and loving nature, they released a 23 song “EP’ in 2004, with all profits from this release being donated to The International Committee of the Red Cross; now isn’t that splendid?

The “EP’ featured 4 new songs (in demo form only) several radio session tracks, and 14 “raw’ live tracks taken on the last show of their “Brave Gravity’ tour; recorded using a â€œtrusty old Sony 70’s middle/side stereo mic from a boom arm attached to a lighting rig.ÃƒÂ¢Ã¢â€šÂ¬Ã‚Â Now that is awesome.
After a brief hiatus, the band announced they were recording a new album, “Backlash Cop’ which is set to drop June 18th.

Their sound ranges from a rabble-rousing call-to-arms (see – “Conventional Thought‘ with the anthem like chant of â€œTHEY MADE ME DO IT!!!!ÃƒÂ¢Ã¢â€šÂ¬Ã‚Â) to the gentle beauty of “Last Thing I Should Do‘ and “Underground Queen‘, through to the plain spiteful bile of “What? The Argument Has Changed‘ and the punk-rock fury of “Calculate The Risk‘.

From what I’ve heard of the new album, it could well be their best and most diverse yet. It has been a while, and I must admit I was concerned about the band and their future, but thank god they are back. Consistently brilliant on record; consistently brilliant live and such lovely, lovely guys. They deserve all the support and success that’s coming to them.

New album “Backlash Cop’ is to be released on 18th June; no news of tour, but fingers crossed something is announced soon. The band is also streaming the new album in full on the Smalltown America website, click here for the artist page and then select ‘play all Jetplane Landing tracks’.