One dark and chilly night when Mr Tim Burton was suffering a high fever and weak at the knees, he clambered into his crushed black velvet sheets hoping for a dream-filled night of marshmallows and furry things.. But as the night drew colder, a hungry Incubus with a taste for ‘The Dresden Dolls‘ albums took advantage of poor old Burton. All was not lost that night however, as Portsmouth’s answer to everything sinister was born. Mister Joe Black. 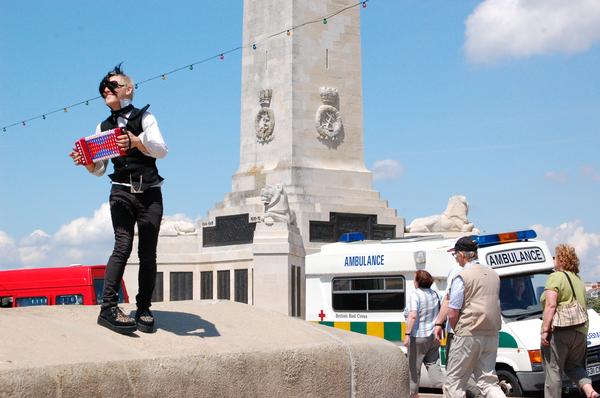 His sound is like an old lady, covered in Disney-endorsed syrup, in a mobility chair charging backwards, on fire, heading towards a Victorian style Pillow factory.

With his first full length album ‘The Bible Of The Waltzing Cynic‘ he picks your brains to find all those little things you were scared as a child and bring them back into reality. From the Scarecrow in the moonlight at the end of the road, to that time you shit your pants at McDonalds, he knows all.

With a nice list of tour dates a head of him and even a nod from the likes of Creature Feature he is not doing half bad.

Keep it fast had a chat with Joe Black about preachers and arse tattoos:

Do you ever get different reactions when performing on the street than on stage?

People seem a lot less shocked on the street surprisingly. They don’t seem to mind their children hearing….

What is the most bizarre thing somebody has said to you after a show?

“Sign my arse; I want your signature tattooed there!”

If Fred Durst ever tried to make a comeback (again) and wanted to use one of your tracks for his background beat, would you be interested?

The Limp Bizkit paedo man? Of course I’d let him. There would be no greater honour, except being Patrick Mooreâ€™s bitch- that would be pretty good.

Have you any thoughts on ‘expanding’ your music to use other instruments over time, or would this be betraying the Joe Black genre?

The album uses around 15 instruments on average per track. That can’t be done live, but we make up for it. I’ve recently expanded the live show to around 4 people, but it varies.

If a megaphone-wielding preacher implied that your music was from the belly of Satan and you should cease instantly, what would your reply be?

If you want to hear more simply go onto his myspace here.