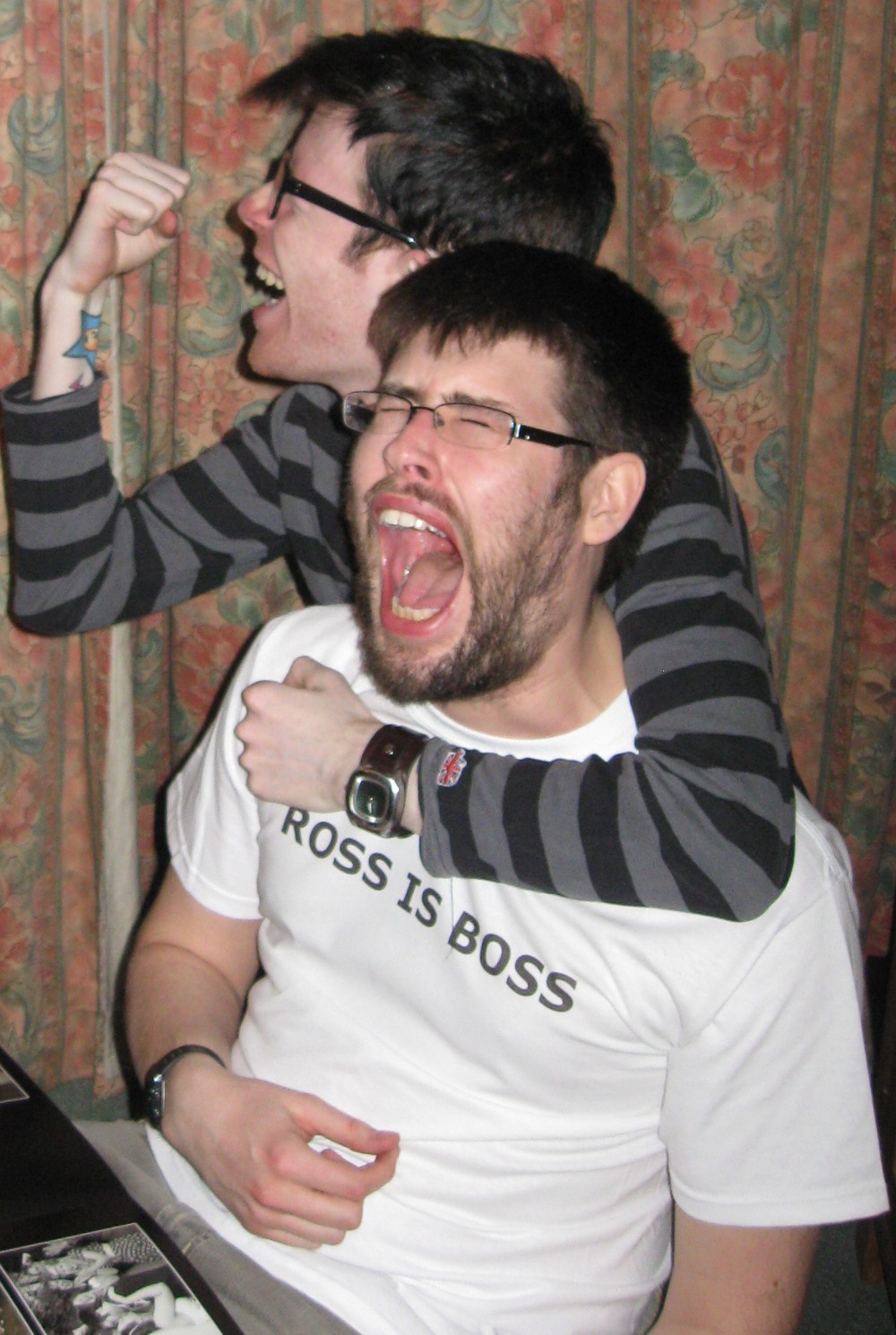 Yeah, itâ€™s that time again â€“ a rundown of music over the last 12 months. Updates to the site have been pretty infrequent this year; I apologise â€“ my workload has been erratic to say the least. Next â€“ year, back in business with more posts, more updates.

Itâ€™s been a particularly brilliant year once again; Kvelertak being one of the sleeper highlights with their self-titled debut; not to mention Adebisi Shank claiming the Keep It Fast best album of 2010 with their second effort; a record that twists their raucous cacophony of dance-punk chaos into new realms. Thereâ€™s been some fantastic gigs also in the form of AC/DC blowing everyone away at Download Festival, not to mention Rammstein at Wembley back in February and Less Than Jakeâ€™s stupid antics in both Oxford and Cambridge.

One of the most ridiculously pompous offerings Iâ€™ve heard this year â€“ Mose Giganticus is a one-man project of grandeur and electronical flamboyance. The mash up of Mastodon-stomping battle metal and squelching keyboard bleeps, theatrical synth-rock ostentation and some of the best vocals Iâ€™ve heard all year make â€˜Gift Horseâ€™ a surprising, colossal breakdown of eclectic sounds and noises.

Iâ€™m not sure if grunge is supposed to be â€˜coolâ€™ anymore but Dinosaur Pile-Up are trying to drag it back with a weird juxtaposition of apathy and mid-90s heavy rock gruffness. â€˜Growing Painsâ€™ is nothing new; in fact it borrows so much from Dave Grohl he should think about contacting his lawyers â€“ but itâ€™s the power, the passion the face-melting riffs that make this one of those albums thatâ€™s never in its case because itâ€™s permanently in your cd player.

Awesome radical, awesome totally bodacious! We are so macho! Yeah buddy! Yeah! Huh! Yeah! Huh! Alright! Ultimate Power! Maximum life! The dumbest record Iâ€™ve heard all year, but one of the best and a worthy top-three place to a Leeds based outfit, who should never change their stupid grunge-punk roots for anyone. Need a band for a house party? Ring these boys up and get the beers in.

A writer on the website metalsucks described Kvelertakâ€™s self-titled debut as a feel good record and one that made him so happy, despite an obvious misanthropic view of life and everything. Heâ€™s bang on â€“ â€˜Kvelertakâ€™ is such a fantastic record; the mixture of 70s rock â€˜n roll, with black metal and hardcore is a noisy chaos of high fiving, drink-fuelled chants of ecstasy and it will make you grin so much, your head will fall off.

Still impossible to describe â€“ half the time youâ€™re wondering if youâ€™re listening to a lost Super Mario Brotherâ€™s track, before it descends into something that sounds like Battles and Lightning Bolt joining forces to create a punk rock band. â€œLike having a kaleidoscope forced into your brain during an electro storm, Adebisi Shank are anything but predictableâ€ â€“ The very future of instrumental rock music, an incredible second album by three musicians I could listen to all day.

–
Other notable album highlights include

5. Killswitch Engage â€“ Download Festival, Friday
Adam D dressed as a transvestite superman, alongside Howard Jones and his epic set of pipes, Killswitch roar through a tight set of contemporary heavy metal. Adam D steals the show with his stupid antics, but never puts a foot or hand wrong regarding playing ability, along with his desire to headbutt all our girlfriends in theirâ€¦.ahemâ€¦.vaginas, their version of â€˜Holy Diverâ€™ is a fitting tribute to the late Ronnie James Dio.

4. Them Crooked Vultures â€“ Download Festival, Friday
â€œItâ€™s difficult to describe the intense wave of euphoria I felt during their set and thinking back to it now, I wish that I could feel like that all the time.â€ â€“ Said euphoria may have been the several pints of Tuborg, but quite honestly Them Crooked Vultures were a surprising highlight of experimentation, noisy jamming and high-octane rock from Mr. Grohl, Mr. Jones Mr. Johannes and Mr. Homme.

3. Rage Against The Machine â€“ Download Festival, Saturday
Rage Against The Machine were perhaps the best sounding band of the entire Download weekend â€“ everything was spot on. Their performance was electrifying; with everyone in the vicinity of the main stage bouncing up in the air like the ground was made of rubber. Just as entrancing, if not more so that AC/DCâ€™s set the night before â€“ all of which are American dreams.

2. Rammstein â€“ Wembley Arena
From the explosions, to indoor fireworks during â€˜Du Hastâ€™, to setting someone on fire during â€˜Benzinâ€™, the constant roar of the flamethrowers, Til dressed as a giant metallic angel for â€˜Engelâ€™, ticker-tape falling from the sky, keyboardist in a sparkly suit and then riding a dingy into the crowd; Rammstein know how to put on a show â€“ and how.
1. AC/DC â€“ Download Festival 2010, Friday
Well, who else was it going to be? This is how you do a rock show â€“ this is why theyâ€™re regarded as the greatest live band ever. Stupendously overblown rock â€˜n roll destruction.

Rock Sugar (weird Glee-style rock/heavy metal mash-ups have never sounded so good. Journey mixed with Metallica? Queen mixed with Motley Crue? Oh good god yes. Jess Harnell and Rock Sugar max out the Pepsi Max stage with their anthemic sing-alongs.)
Slash (credit to Slash for writing some brilliant songs from his debut which sound fantastic live, but vocalist Myles Kennedy steals the show with his superb vocals, making their four, yes FOUR Guns N Roses songs sound incredible.)
Billy Idol (performing in the rain, shorting out all the microphones, yet still sounding punk as fuck â€“ the Idol is on form and manages to lift the spirits of a nearly drowned Download festival audience.)
Airbourne (like a younger, faster AC/DC, Airbourne are all over the place. With their vocalist/guitarist deciding to climb the rigging of the second stage just to perform a solo at the top, everyone watching is suddenly an Airbourne fanatic.)
Pulled Apart By Horses (I only saw half of their set in a small pub, but my god, were they amazing. Ultimate power, MAXIMUM LIFE!)
Less Than Jake (Playing a large amount of their Losing Streak/Hello Rockview material is always a big win to my ears and the Gainesville lot tore through nearly every album of their long and brilliant career with such enthusiasm and energy.)

Musical moments of the year

30 second one-note piano bit on â€˜Blodtorstâ€™ by Kvelertak.
â€œHUH!â€ on â€˜Sultans of Satanâ€™ by Kveletak.
The breakdown on â€˜I Punched A Lion In The Throatâ€™ that leads into the cry of â€œULTIMATE POWER!â€ by Pulled Apart By Horses.
The disgruntled anger of The Austerity Program throughout song 27; plus the drum machine breaks.
Keith Buckleyâ€™s vocals on â€˜Weâ€™ve Got A Situation Hereâ€™ by The Damned Things â€“ brilliant stuff.
The bass and sampled cheering on â€˜Masaâ€™ by Adebisi Shank just before it goes completely batshit insane.
Parts of â€˜Release The Beesâ€™ by Not Squares sounding like Justice crossed with The Prodigy â€“ frightening.
The drumming on â€˜S is for Salamanderâ€™ by And So I Watch You From Afar.
The keyboard intro on â€˜White Horseâ€™ by Mose Giganticus â€“ overblown doesnâ€™t begin to describe it!
The massive shouty chorus on â€˜Lifelong Dayshiftâ€™ by Middle Class Rut.
The â€œYeahâ€ on â€˜Traynorâ€™ by Dinosaur Pile-Up (itâ€™s almost inaudible, but I just like it.)

A new album by The Drips please.
Down I Go to finish and release â€˜Gods.â€™
Jetplane Landing to emerge from hiding? Please?
Limp Bizkit for Download Festival 2011.
Limp Bizkit to release â€˜Gold Cobra.â€™
Fuck, ANY Limp Bizkit news as long as it isnâ€™t â€œWes is leaving again.â€
–
Cheers, and a happy new year to all our reader(s)!