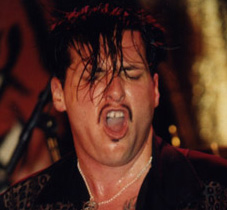 I’ll keep this brief, as I’m known to prattle on a bit. It’s been an interesting year for music. Utterly amazing in places, steaming piles of festering cow shit in others. I think it’s like that every year though, swings and roundabouts, eh? Anyway, here are our highlights (a lot of them) and my Their best work to date – Hopesfall pull out the stops with their anvil-heavy choruses and off-kilter space rock posturing. A powerful and surprising return.

Technical jazz metal, with glitchy electro breaks and haunting atmospherics, whilst vocalist Greg Puciato does his best to sound like a rabid dog. It will tear your face off. (Review) sarcasm strewn throughout, ‘Curses’ was a surprising delight for the die-hard Mclusky fan I have resting inside me. (Review)

(Notable praise towards the following bands and the albums they released this year: Baroness, Pig Destroyer, Les Savy Fav, Cutting Pink With Knives, Yakuza, Gay For Johnny Depp.)
–
Top 6 Gigs of 2007 (yes so good there is a 6!) Fuzzy sound quality in places, but the energy the Seattle 5 piece had was incredible. Moreover, they played ‘The Shame’ – says it all really. Epic. Also, the fact that we met Johnny at the end added points before we were crashed by screaming girls… (Review)

Throwing shapes with glow sticks like my life depended on it with Australians cyber punks finest! Never have I enjoyed such a repetitive dance thump in the back of my mind! Extra points for pure theremin talent but again poor sound quality at some parts. (Review)

One of the hottest and most tiring gigs I have ever been to. Chaotic synth punk/j-pop from Japan’s Polysics meant I couldn’t stop grinning for weeks. A cover of ‘My Sharona’ was a true hit that practically melted the venue to a pulp due to the frantic dancing from everyone! (Review) The Bronx remain to this day, one of the loudest punk bands I have ever seen. Matt Caughthran is a born entertainer; even a supposed broken ankle didn’t stop him jumping in the pit during ‘They Will Kill Us All.’ Brutal.

The most emotional gig I’ve ever been to. Brand New pulled at my heart strings for over 2 hours and the sight of everyone singing along around me made it the perfect gig experience. Gig of the year, no question.

Top 5 accounts that made us smile 5. The Eighties Matchbox B-Line Disaster crawling from the ashes with a new ep

Just as you were thinking the only way you was going to get any kind of similar ‘b-line’ material was from The Horrors (am I actually saying this?) the 5 piece Psychosis Rock band unhinge their ghoulish tunes in a form of a breath taking EP ‘in the garden’. With 4 new studio tracks and a “Live In The Arena Of The Unwell” cd (including 9 of the 10 tracks not on a shop cd before) it shows that the Brighton band are not buried yet.

4. Rocket from the Crypt bringing a bundle of plastic joy!

Not only is the Californian deceased band (*sniff*) finally releasing a dvd/cd pack of all the tracks they played on their last gig, BUT they are releasing another all systems go!!!! How can these guys keep finding b-sides?!?! This way we can pretend that they are still going!

Dancing to ‘Young Folks’ by Peter, Bjorn and John, whilst trying not to drop my warm can of lager and trying to request motown/indie anthems was a particular highlight of my only festival experience this year. A classic night.

2. ArnoCorps returning to the UK GOOOO!!!!!!!! Hardcore action-adventure rock-n-rollers, ArnoCorps (pronounced ‘Arnocore’) have promised to return to our delightful country for a summer tour in 2008! What are you waiting for? Get watching Predator/Running Man/Terminator etc., put on that camo-warpaint and prepare to be a goddamn hero!

This is in fact the ground breaking news for the world this year! After watching him perform in London’s last ever Hot Snakes performance it was a true milestone. Not only has his endless tracks from a number of bands been a real benchmark for our generation but live he sounded even better! Keep it fast were lucky enough to speak to him on two occasions, but when asked about the future of RFTC he didn’t want to say a lot. This doesn’t matter now as he is back with a new album in March and talk of a tour! rather then repeating ourselves why not click on these links (here and here) for further details!

Low point news – Not going to describe these as the title says it all:

The Locust team have their van broken into, with all their gear, passwords, computers etc taken .

Some Girls are laid to rest.

Blood Brothers call it a day after 10 years.

Meet Me In St. Louis part ways with vocalist Toby.

Fickle Public split after only 1 album.

Stay tuned for my tips for 2008: some surprises guaranteed!

By Ross Macdonald and Jason Kahl