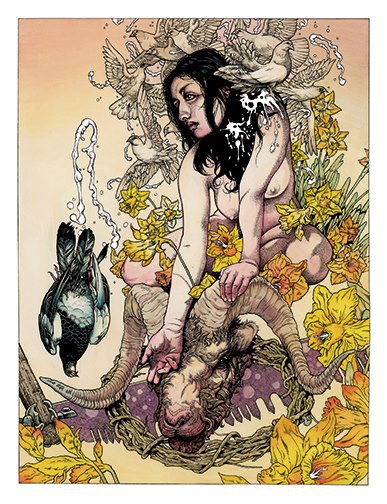 Difficult prospect creating the follow up to this really. People have been waxing on about Kvelertak for a while now and all the rampant hype, mouth-frothing praise and owl impressions are entirely justified – they’re a fantastic band; bizarrely bridging the gaps between metal, punk, rock ‘n roll and anything else they can lay their filthy, feathery wings on. Their self-titled debut is still unlike anything else out there at the moment and Meir (More) is next in line to take the crown.

How accessible are Kvelertak though? They sing in Norwegian – at best you can shout along to a bad impression of what they’re saying (I like to shout “I DRIVE THE CART TO KRASH FOR ODEN!” (which is the actual translation) at the beginning of Bruane Brenn – go on, try it). Nonsense,Â  complicated song titles? Bonkers artwork of birds crapping on a naked woman who’s sitting on top of a ram’s head? To be honest, none of these things should matter. Having seen them destroy on the live circuit three times (the last being particularly epic) I can assure that everyone and I mean everyone was singing the goddamn riffs right back at them and whenever they got the chance, or was bellowing “KVELERTAK!” like some mead-induced battle-cry.

Closing track, simply titled Kvelertak – is like listening to a Scandinavian AC/DC, around the Back In Black-era..

Opening track Ã…penbaring builds upon a teasing, perilous intro of wailing, drawn out guitars before morphing into a strong metallic assault on the senses. Double-fast drumming, sporadic guitar shredding and some harmonised backing vocals all make an odd and perplexing combination on a track that ends somewhat abruptly. Spring Fra Livet is more of Kvelertak of old – it bursts and I mean bursts with such vibrant jollity and that signature gruff hardcore stomp. The gritty thrash metal moments are an incandescent firework of explosive colour and happiness, while the big rock, foot-on-monitors epic rocking is taken to new and expansive levels of ridiculousness. At times it sounds like Kvelertak have been listening to swami-rock ‘n roll – all the “HUHS!” and “OOOHHS!” are straight out of the big book of John Reis.

It won’t surprise you to know that lead single, Bruane Brenn is the best song on Meir. Now, don’t take this as a disservice to Kvelertak or Meir in anyway, itâ€™s just how things are. In fact, Bruane Brenn might just be the best song I’ve heard all year – yes, it’s seriously that good. The chorus is achingly brilliant, (those gang vocals are superb) as is the one-note piano bit previously heard on Blodtorst. The breakdown taps into the 70s rock ‘n roll blood that coarses through their Scandinavian veins, whilst the more harsher and stringent elements are a ferocious snap of biting, punk rock fury. It still feels like a hug rather than a smash to the face and once you’ve seen the superb video in all its owl-hat glory, it’s difficult not to be warmed by such a powerful and passionate blast of Kvelertak’s glowing energy (superbly portrayed by a bunch of kids having the time of their lives).

Trepan is a fitting title to a track that is akin to having someone drilling into your skull. The intense, metallic attack is a stark and stringent blast of hectic and caustic energy, similar to the Kvelertak of old, but feels a lot more abrasive and intrusive.

In any other language, Evig Vandrar would be veering close to the side of being decidedly pop-punk and being the lightest sounding track on Meir. This isn’t a criticism – far from it; I applaud Kvelertak in taking this approach on a track that is fairly alien to the others on Meir. It starts with vocalist Erlend Hjelvik clearing his throat and blasts into a decidedly bouncy, punk rock pathway. The stomping boots on the chorus, not to mention the adrenalin-charge that kicks in halfway through all add to a breathless and spirited rush and they even have time to chuck in some acoustic guitar strumming on a track that’s less than 3 minutes long!

Snilepisk is Evig’s evil twin – a throaty scream kicks things off and then it all goes to hell – thrash punk hits the wall with a splatter of grosteque bloody feathers and chaotic riffs. Vocalist Hjelvik sounds like a complete animal; breathless and ragged, he channels hardcore zeal with determination and maniacal energy. The breakdown around the 1 minute 40 mark is surprising. Here, Kvelertak go all eastern-metal on us (conjuring up images of twisting snakes) – it’s somewhat mesmerising and hypnotic, only to be broken by a barbaric breakdown of pedal-smashing drums and Hjelvik’s guttural vocal screech.

According to the text in the album sleeve, Nekrokosmos is about an alien who wishes death to our world. Um…ok. Aside from that, the riffs in this are the howling, exquisite classic rock that Kvelertak play with such gusto, whilst the heavier and more deranged moments are jarring and a reminder of just how sporadic and unique these Scandinavians can be. Underto is a weird track, part, brash, shouty hardcore, part Kvelertak going hell-for-metal-leather; then there’s the outro which builds and builds but fades out before it explodes like you feel it should – but leaves you wondering, should it have?

Closer, simply titled Kvelertak, is like listening to a Scandinavian AC/DC, around the Back In Black-era. From the spirited “WOOH!” of the songs opening, to the glorious rock ‘n roll stampede of Antipodeans riffs, its clear where Kvelertak’s influence lies on this closer. A confident and anthemic blast of Angus Young-worshipping, beer-drenched party rock and one of just 11 reasons why Meir should have its place in your record collection â€“ a breathtaking and exhilarating return.