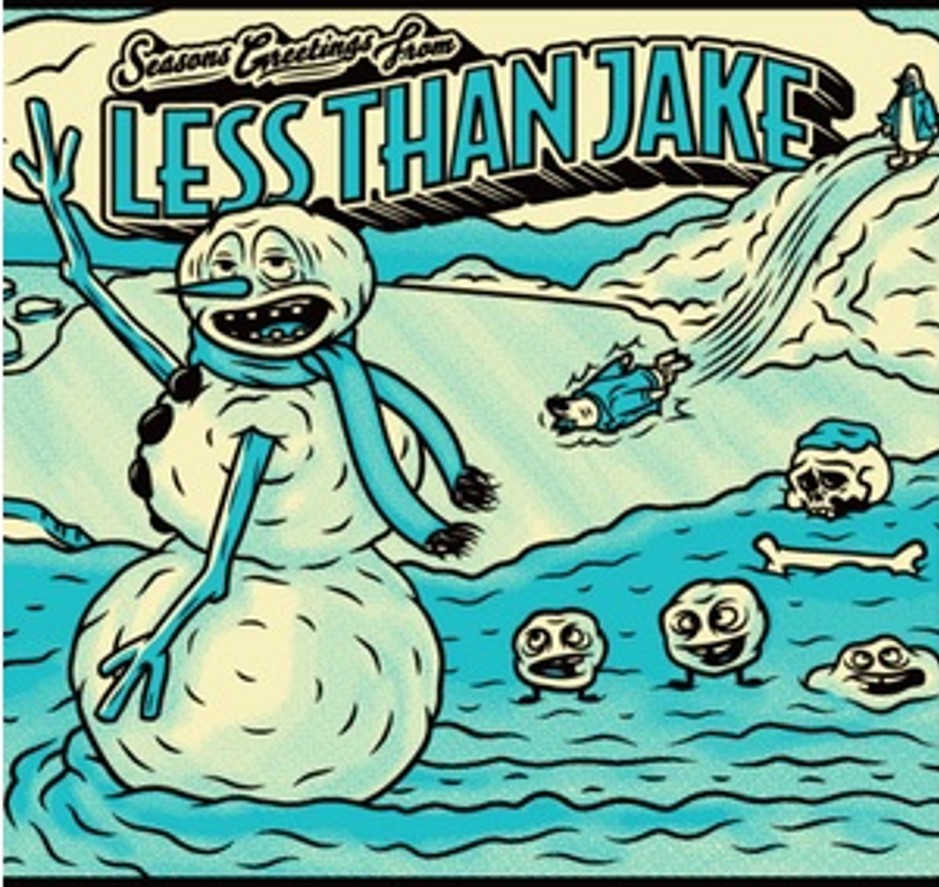 Round up of recent EPs, releases and stuff I’ve discovered in the last week. Less Than Jake are back on the horizon making more trombone-swinging songs about traveling and such like. Hardcore-thrashers Weekend Nachos are set to release a split EP with Lack of Interest and it sounds the absolute bomb, whilst A Place To Bury Strangers add noise with more noise to create audi0-meltdown. Less Than Jake have been around for 20 years and they still sound fresh and full of pez, brass and pogoing good-time anthems. Must be something in the water in Gainesville. I could harp on about maturity in their sound, but thatâ€™s not going to happen. Like their vibrant style on â€˜GNV/FLAâ€™ â€“ this harks back to the time when â€˜Borders and Boundariesâ€™ was such a vital, beating heart of ska-punk. â€˜Seasons Greetingsâ€¦â€™ is packed with warmth. â€˜Fine Points of Forgivenessâ€™ is particularly sweet-sounding, with Rogerâ€™s forever youthful, nasally drawl complimenting the jaunty, pop-punk bounce, backed nicely by the slightly muted horn bleats (think Rocket From The Crypt brass compared to Reel Big Fish). Itâ€™s infectious; something that Less Than Jake excels at.

â€˜Younger Lungsâ€™ is reminiscent of â€˜Hello Rockviewâ€™ â€“ the delivery and call-and-return vocals between Roger and Chris work superbly. â€˜A Return to Headphonesâ€™ is a blaring storm of swirling trombone and sax, choppy ska-upstrokes and is easily one of the best songs theyâ€™ve written in the last 10 years. â€˜Done and Dustedâ€™ feels like a Mad Caddies track to begin with; Chrisâ€™s vocals are rough and broken, thereâ€™s an edge of melodrama, but like all Less Than Jake songs, the chorus swings in with that hook, the familiar crunching guitar chords and itâ€™s roaring for you to bounce around like a maniac.

â€˜Seasons Greetingsâ€™ proves that Less Than Jake are as consistent as ever â€“ kings of a genre that theyâ€™re incessantly pumping new life into and on the strength of this 5 song EP, long may their reign continue. I fucking love Weekend Nachos â€“ â€˜Worthlessâ€™ was one of my favourite albums last year, so to hear that the bro-core styling of the WN crew have recorded some more insane noise is a big hell yeah. This part of the split clocks in at an impressive 4 minutes and 29 seconds. If you enjoyed â€˜Worthlessâ€™ this pretty much picks up from where that left off. The vocals to some extent sound even more warped and chaotic. On â€˜Critical Mass Death Penaltyâ€™ the sheer panic/terror that pulsates from the barking mad vocalist is apparent, especially when it all breaks down in a hailstorm of mangled riffage. â€˜Toothpasteâ€™ is 30 seconds of balls to the wall, punk rock mashed through a fine mess of Despise You-style, blunt hardcore.

â€˜Backwardsâ€™ is a stabbing, strut of 90s-style hardcore gruffness, all sneering attitude and bloody knuckles. â€˜Livinâ€™ The Dreamâ€™ is a minute long moshcore anthem that splices noise-rock and the same relentless brutal beatdowns in one package of screeching feedback.

The thing with Weekend Nachos is; they never want to outstay their welcome. Each track is performed in the style of â€œletâ€™s get this shit done as quickly as possible so we can go to taco bell, get some beers and fucking party.â€ Iâ€™m totally down with that, seriously. I wouldnâ€™t be surprised if they operated a three-takes and thatâ€™s it policy to their recording.

These songs never feel particularly hate-filled, more relentlessly over-the-top with an insane rabid delivery. It makes you want to jump around like a twat and feel awesome. Bro-core Jock-baiting crust punk has never sounded so tasty. Thereâ€™s something wonderfully dead sounding about â€˜Onwards to the Wall.â€™ Opening track â€˜I Lost Youâ€™ in particular, is one long howling crescendo of ethereal guitar strangulation. The hollow opening rumble of bass and drum, followed by the lamenting cry of the guitar sends a chill down the spine. The vocals are spirit-world style creepy; fading in and out of the rising shriek of the guitar that reaches wall of sound levels, a minute and 20 seconds in.Â  Itâ€™s an excellent opener â€“ relying on making the listener shift uneasily as the battering ram of continuous drumbeats, filthy bass and mangled guitar wrenches a tortured casterwaul of explosive sound.

The shrill guitar shred on â€˜So Far Awayâ€™ is possibly causing damage right now. Note, A Place To Bury Strangers can only be played at one volume â€“ â€œlouder than youâ€™re currently playing it at, you pussy.â€ This track seems to get better the louder it gets â€“ new unheard effects and roars punch through this tidal wave of distortion.

The beginning of the title track is incredibly beautiful â€“ a stunningly, mellow build of lapping bass notes over a continuous drum loop. As the song grows; the guitar swings in and out â€“ possibly not being played, more hit, shaken, thrown and dropped near a speaker to get the right effect. The guest-female vocals add a gentle, mesmerising depth, especially layered into the brooding male lead. On â€˜Nothing Will Surprise Meâ€™ noise dominates, as does the robotic shred of vocalist Oliver Ackerman â€“ uncomfortably loud and terrifying guitar tones that sound like someoneâ€™s crushing a saxophone with a speaker.

A sinister, uncomfortable storm â€“ I even swear they sampled the sound of a borer on â€˜Drill It Outâ€™ â€“ which is like something Leatherface, The Dentist and Predator would make if you gave them the right instruments.

Less Than Jake
A Place To Bury Strangers
Weekend Nachos