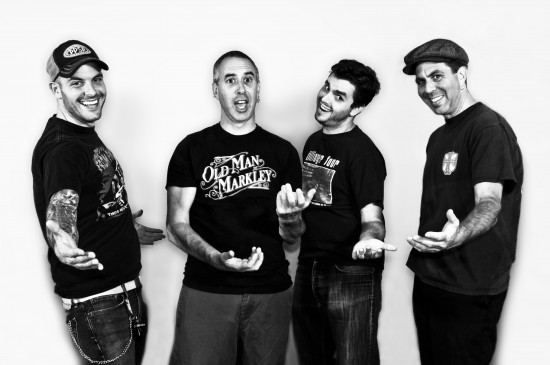 Artist – Various/Youth Brigade
AlbumÃ‚Â – Let Them Know: The Story of Youth Brigade and BYO Records (CD/DVD Documentary)
Label – BYO Records
Release dateÃ‚Â – Now
Sounds like – CrustyÃ‚Â So CalÃ‚Â punks reminisce the good times of high fives, stage dives and their influence on the L.A. punk scene from the 1980s until the present day.

Iâ€™m not particularly up on the dizzying heights of the L.A. punk scene back in the 80s; being from the UK, most of my time around then was spent learning to walk, falling down the stairs, trapping my catâ€™s tail in the door and painting my face blue. Now that Iâ€™m older and wiser, Iâ€™m still not 100% sure of it all, but luckily the good folks (thatâ€™s brothers Shawn and Mark Stern) at BYO (thatâ€™s Better Youth Organization) have decided to release a boxed set to pay tribute to their 25 years of service to the punk rock community. BYO was all about promoting the attitude and music of punk and other youth cultures in a positive light, encompassing their idea of â€œyouth is an attitude, not an ageâ€Â and this release, gives those that werenâ€™t around back then a chance to experience it in 3 different formats; book, DVD and CD.

The DVD itself is a 90-minute affair, consisting of various interviews with the punk rock and hardcore elite (Ian Mackaye, Fat Mike, Kevin Seconds, The Bouncing Souls all adding their own positive thoughts about the label and the Stern brothers) and documenting the rise of Youth Brigade and BYO coming into existence.

‘Let Them Knowâ€™ is in most parts, a chronological build of Mark and Shawn Sternâ€™s progression from their humble, surfer beginnings to mentors for punk rock’s continued existence and growth in Los Angeles. Surfing, which was another portal to push the thoughts and actions of teenage rebellion and angst, seems to play a big part in Shawnâ€™s life, having been someone who embraced the non-conformist lifestyle and mentions the notion of slacking off, not going to work, avoiding the clichÃƒÂ©s of life. Surfing was the escape into making your own pattern. Shawn and his brother Mark then discover punk rock (they go see the Dickies and decide this is the new outlet for rebellion to be focused on) and the rest isâ€Â¦well history.

Below is a selection of highlights and things that can be learned from watching ‘Let Them Knowâ€™:

-Forming a new-wave pop-rock group called The Extremes in an 80â€™s punk rock scene is going to get you noticed (for all the wrong reasons) â€â€œ thusly described as â€œall over the place.â€Â

-Ian Mackaye has the strangest voice. He sounds like someone who should be giving advice on your next dice roll in a game of Dungeons & Dragons and not the owner of one of the greatest underground record labels of all time.

-Youth Brigade were originally destined to be a two-tone ska band, but the only band-geek horn players they could find refused to shave their heads. Plus, they read music â€â€œ losers.

-Shawn Stern sounds like a drunken, swaggering Elvis and Youth Brigade were strongly influenced by Sham 69 and many other British acts, particularly in the realms of Oi-punk.

-Staying in a place called ‘skinhead manorâ€™ could well lead to loss of food, your mind and dignity. Described by Matt Skiba (Alkaline Trio) as “a punk rock crackhouse.”

-Back then, people would drive 100 miles for shows. Nowadays, if itâ€™s not happening directly within your field of vision weâ€™d barely turn our heads.

-â€œPromotion of positive things to do on our ownâ€Â â€â€œ an outlook that was very different from the current supposed corruption and negativity.

-Fat Mike states how romanticised people make the LA Punk scene â€â€œ his vision is that it was scary, violent â€â€œ cops seen as the worst perpetrators.

-Steve Soto from the Adolescents looks like a reanimated corpse (sorry Steve).

-If youâ€™re a punk, the cops werenâ€™t your friend.

-Naming your club after a giant Japanese, fire-breathing dinosaur is a very good idea.

-Getting TSOL, The Adolescents, Social Distortion and Youth Brigade together for the biggest punk show in LA at that time (Youth Movement â€™82)will end in a smashed box office, destroyed bar, people fighting constantly, cops being assaulted and a girl breaking her leg falling off of a balcony.

-Word of mouth was the most powerful tool – caused an explosion in the punk scene.

-Bands would put on shows who had no label, no records, were never played on radio, yet the venues would be rammed.

-The first ‘Someone Got Their Head Kicked Inâ€™ compilation is regarded as definitive by a number of punks, including Kevin Seconds, Fat Mike and Ian Mackaye. I still havenâ€™t heard it, but Iâ€™ll take their word for it.

-Old school buses – cheap and easy to cruise to shows in, prone to breaking down constantly. United as a big crew under the BYO banner.

-BYO, Alternative Tentacles and Dischord all had the same philosophy – â€œfuck major labels, weâ€™ll just do it on our own.â€Â

-The tour documentary, ‘Another State of Mindâ€™ – proved that punk wasnâ€™t a dirty word, rag-tag touring at itâ€™s finest.

-Brian Swilley is the godfather of slam-dancing.

-Never record at Mystic Studios -Â  “horrible, terrible place to record and it shows in the mix.”

-BYO were underground entrepreneurs – not looking for flavour of the week, everyone had a chance.

-Reviving swing music is a good idea until you and your bros get kicked out of the band.

I could go on forever listing the highlights, because itâ€™s pretty much all gold, in what is an incredibly well-crafted, informative and honest sounding collection of thoughts, flashbacks and sound-bites from a time that I would have loved to have experienced (although the constant fights and having the shit kicked out of you, yeah I’ll pass). The special features include interviews regarding media attention punk rock attracted, a music video to The Brigade‘s ‘It’s A Wonderful Life‘ (very U2 meets Spandau Ballet) and many, many other features cut from the documentary about the last show at Godzilla’s, the bad times, origins of the logo – fuck it, there’s loads of extras on here just waiting to be checked out.

The Stern brothers talk with such passion and love for what they have done and are continuing to do, emphasising this constant endorsement of “bettering yourself”, all woven together with this brotherly, DIY ethic that extends far and wide throughout the punk community at that time. If you have even a slight interest in three chords, stage dives, and a complete disregard for authority, then ‘Let Them Know: The Story of Youth Brigade and BYO‘ should be in your collection.

The accompanying CD is also a delight, straining at the belt with 31 tracks provided by past and present artists from BYOâ€™s roster. Instead of original contributions, each artist has chosen to cover another artistâ€™s track.

Leatherface roaring their way through ‘Doublewhiskeycokenoiceâ€™ with distorted punk rock gusto and a vocalist who seems to be singing like an enraged bear and drinking neat whiskey at the same time.

Off With Their Heads deciding 80â€™s hardcore punk is a logical crossover in their pummelling oi-fury of ‘Headlightsâ€Â¦Ditch.â€™

NOFXâ€™s version of ‘No More Liesâ€™ harks back to their roots when they chucked out 1 minute blasts of scrappy, thrash-punk but yet still pasted the floor with any other punk band that came within 10 feet.

Iâ€™m still kicking myself for not getting into Youth Brigade sooner, as their swaggering swing-punk exuberance is infectiously brilliant, especially on their cover of ‘Misfortuneâ€™ which sounds like Richard Cheese fronting Tiger Army.

The concentrated, screaming rage of Young Governor on ‘Dominationâ€™, with percussion that is akin to someone playing the drums on an anvil.

Both Pulley and The Briefs do a sterling job with their Adolescents covers; the former taking the anthemic sing-along approach of scrappy pop-punk, whist the latter favour dense instrumental work and a snotty attitude.

The brilliantly named Filthy Thieving Bastards and their jaunty, summers-day sounding folk punk. American Steel also favours a mellower path, combining a gentle acoustic introduction, before launching into melodic punk rock, which despite making ‘Dead and Brokenâ€™ sound far too much like the original, itâ€™s a faithful and passionate cover.

The Bouncing Souls’ song ‘The Ballad of Johnny Xâ€™ is given a punk-ballad makeover by the aptly named Johnny Madcap and the Distractions, taking all the patchy urgency and replacing it with melody and spirited sing-along charm.

But like the DVD, there’s so much packed into this, my best recommendation is to get this right away and get educated and more importantly, get entertained.

Click on the player below to listen to Youth Brigade’s cover of ‘Misfortune‘.

To buy the ‘Let Them Know‘ boxed set, click here.