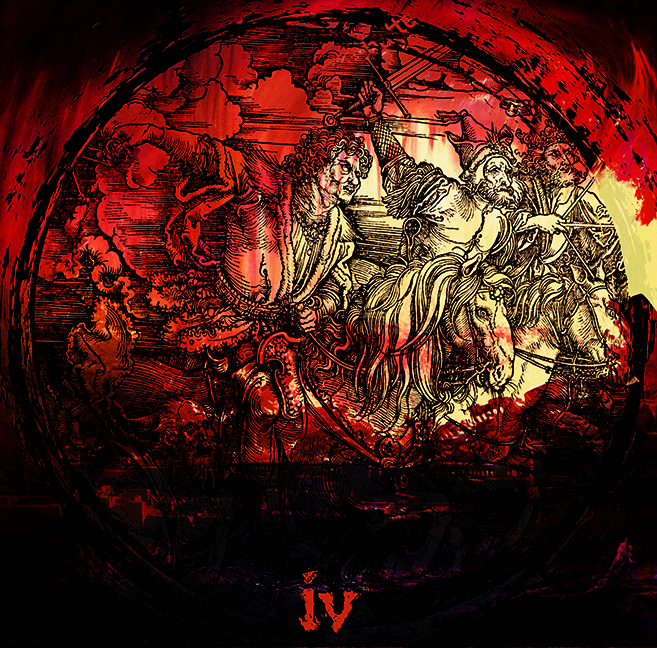 Straight out of the pit, Blasphemour Records have a real treat in store – a four way split, coming out on half ox blood, half mustard vinyl. Ox Blood? Someone form a band called that right now. Four bands contributing a track each, drawing power from various hardcore roots and featuring past members of several acts that will surprise you.

First up, are Liars Cult, who really don’t give anything away with their Misfits-esque logo on their FB page. The opening salvo on this is seriously heavy – it’s like a squadron of tanks rolling into view, churning the dirt, crushing skulls, smashing through barricades. The almost classic-metal opening licks, change to this crunching barrage of grumbling noise, only to change tone again, breaking into splintering, shouty hardcore, that windmills around with arm-aching fury and squealing guitar solos. “There’s a war in this concrete jungle!” is howled at several points during the maelstrom of hacking metallic shredding, as styles are scattered to the winds. It all gets very “epic rocking” in the closing minute, proper power-metal solos, that end in throaty, blood-curdling roars. A solid, entertaining and barbaric opener.

Portland’s Unrestrained are punk as fuck and they want you to know it, fact. The rattling drums beats, chugga-chugga-groove is all here and while it doesn’t set the world alight, it’s good fun all the same. It’s the kind of track made for high-fiving your bros, epic stage dives, climbing the rafters to launch yourself into a sea of arms held aloft. The vocals are spat from a grizzled and tortured mouthpiece, whilst moments near the end feel like Unrestrained are blurring lines between downset‘s space-invading, nuisance rapcore; talks of “gasps for air” meld with the stocky and ramshackle beatdown attack. A chest-hitting slab of gnarled, aggressive hardcore.

Changing styles again, Detroit mob, Great Reversals, talk of being “condemned to my watery grave” on this bigger-boat needing homage to Bruce, one of the cinema’s great and enigmatic characters. “I haven’t seen the sunlight in years/it’s so cold down here” shouts Great Reversals frontman; someone should tell that son of a bitch to smile. Tension pulsates from this track, like a taunt, visceral nerve; it has that animosity of early Snapcase; all angles (every single one of them sharp) and that dense, but still emotional wreckage of Touché Amoré. It all fits together nicely into this weighty and crushing piece, mostly because they’ve followed the formula of aggression and emotion goes into the song, riffs go into the song, aggressive riffs are now in the song. Boom.

Apparently, some chap called Iggy from Abnegation features on this Funerals track; okay then. A big tribal drum intro opens this, which is very nu-metal/Manson in execution. This is soon nuked from orbit by the crunching ragged, metallic hardcore that announces its presence in blustering and brutal exaggeration. There’s a malevolent snarl to Funerals – their sound is seething, confrontational; which helps when considering both Iggy and their actual vocalist snarl and spit discontent and disharmony at each other. Heavy like a really heavy thing, Funerals bring the pounding thunder.

IV can be purchased from the Blasphemour Records store here. Or, you can stream it below.