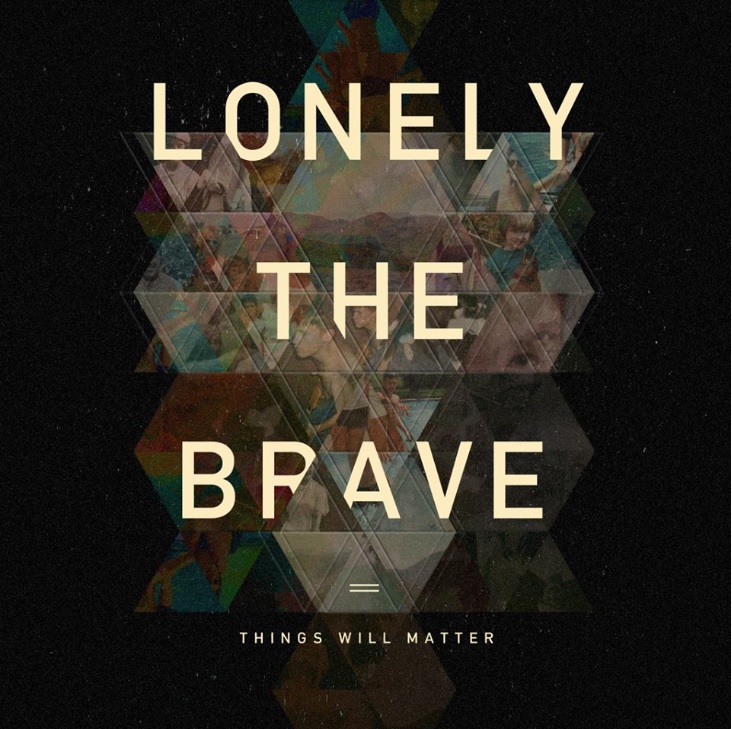 Band: Lonely The Brave
Album: Things Will Matter
Label: Hassle Records
Release date: 20 May
Sounds like: Rattlesnakes in the Jaws of Hell

There are moments when music really does touch you. That burning, emotional rush that feels like it will engulf you in its flames. Lonely The Brave live these moments every time they pick up their collective instruments and no-one more so than vocalist David Jakes, a man, who is beginning to emerge from his chrysalis. Hell, he stood at the front – the FRONT of the stage last time I saw them (he still didn’t speak much mind, Mark and Ross are the mouthpieces in that respect). Things Will Matter follows hot on the emotionally charged and fragile The Day’s War and is exactly where and what Lonely The Brave want to be.

As pointed out by my best friend, the end of Lonely The Brave’s cover of All Is Full Of Love from the Victory Line edition of The Day’s War (yeah, you need this) – features a hidden track, that runs for 2 minutes or so, which is blatantly  a demo of the opening track, Wait In The Car. This moody opener is an absolute wrong-footer in every respect and feels so close, so personal, so gut-punching, it almost feels guilty listening to it. It’s as if it should be something that Jakes should only have, his song, his preciousness. A mostly synth-led piece, Jakes’s vocals soar over this, his melancholy tone in full effect – whilst the keys buzz and hum and the guitars continue along a muted and thoughtful path. If Wait In The Car is the calm, then lead single, Black Mire, is the storm. Has Stephen Carpenter been dropping by? No? Okay. This is so Deftones it bleeds fur everywhere, Black Mire is heavy for Lonely The Brave – it crunches like bone splintering; the vocals are buried in the high-mixing, giving Jakes’s unique style an even more complex delivery. He sounds like ghost, full of regret, fear and loathing, whilst the band utterly bury this with slick, crunching riffs and the kind of dark, intimidating sound you’d never expect.

The hook-laden and beautiful colour of Rattlesnakes is another vibrant slab of just how well Lonely The Brave craft their intricate and passionate art. The guitars glimmer and shine, but it’s the lyrics that show the real meaning. There’s fear inside – “Man, put your teeth away/cause this ain’t the time or place/if we keep coming up enemies…” intones Jakes, imploring whoever the aggressor is, to keep back from the sombre and patient frontman. The chorus though – it will knock you off your feet; it soars and howls with such vigour and frantic clawing. On Play Dead, Jakes sounds breathless – his voice is somewhat ragged; you can quite clearly hear him taking great gulps of air, as he delivers his lines with that trademark passion and resolute belief. Musically, it’s a forlorn, almost sedate effort – the guitars hum and buzz and only kick into a surging post-hardcore see-saw of scything riffs in the song’s soaring coda.

Dust and Bones is their Blue and the Green of this album; a huge and I mean, huge skyscraper of a chorus is attached to this, whilst the crunching, melodic rock opening chords chime and ring with bristling energy, powerful emotive rage. “I have heard you’ve blown in / but you won’t kick the shit out of my dreams…” roars Jakes, reaching this fuzzing, anthemic level of delight and vibrant wonder. Following track, Radar, is a snotty, abrasive drum-led piece of churning, crackling punk that sounds so unlike Lonely The Brave, yet it’s clearly their trademark emotions fed through the 90s-rock manipulator; bashed about, cut up and bruised to form this snapping burst of positivism and bubbling confidence (something that Jakes’ voice radiates on this). Plus points for the Spielberg-style aliens-vibe in the video. This is followed by the slow-burn of Tank Wave; a jarring and melancholy piece when compared to grunge-punk of Radar. Even the guitars sound sad – there’s woe here, stripped apart and scattered on the floor – “Through the door/I fall in/Into your arms/I’m coming” – states Jakes, his morose and sorrowful voice is cracked and weathered.

I’m fully convinced that Strange Like I might be one of the most perfect songs. This fuzz-punk burst of sheer power is simply beautiful. The muddy production sticks to it like glue and enhances it so much, making sure that the utter encompassing fervour this expels is breathtakingly wonderful – Jakes is a commanding, powerful and uplifting figurehead, whilst the backing vocals, (the fucking backing vocals) are anthemic to the very heavens. This will make you want to hug everyone, cry, scream, shout and embrace life. By the time you’ve reached the hi-hat pattering of the emo-tinged, fuzz-rock of  the deeply personal and charred Jaws of Hell, you’ll feel exhausted. It’s a beautiful, raw-sounding and emotive journey from this Cambridge mob; a stunning and explosive second album. Expect to see this bothering a lot of end of year lists, truly something very special indeed.