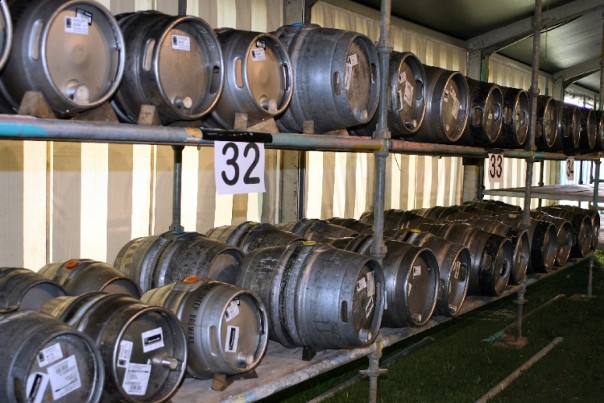 Another year, another beer festival – thank you Peterborough for a most excellent time drinking various ales that ranged from the colour and texture of tar (one of my friends stated that â€œdrinking a half of that would take 10 years off my lifeâ€Â) to something that looked like it had been passed into the steel urinal trailers out back. Also, sort out the crow hats for next year – we want 2 feet on each, yeah?

Mad Mac was sent ahead as a scouting party on the Friday. I was at work/lazy/wanted to play Journey on Rock Band and didnâ€™t accompany him. His task was to at least sit through at least 10 minutes of the 2 bands that were playing that night and provide a witty diatribe of the proceedings. His attempt at this task wavers between failure and success, much like an unpredictable seesaw. The results read as follows:

This four man group I heard strike up from a neighbouring tent. If I had listened to my first impressions, I would have moved away from them and coincidentally – missed a treat. Of the four, three of the band members had seen a good many summers – the term old rockers seemed to fit. The lead vocalist who screamed down the mike; jerked and jumped about like a puppet worked by someone having a fit or a cat on a hot plate. On one occasion, he leaped over the speaker, over the barrier, and into the crowd much to the delight of all. A large crowd collected to watch this really good group. I did not know any of the numbers but a crowd of all ages was enjoying the spectacle. One rather long instrumental was extremely good and a few people started to dance.Ã‚Â  The vocalist who played a variety of mouth organs, for some mysterious reason attempted to lift the keyboard he was playing, then though better of it. It must have been a bit heavy. They all played their instruments very well under the direction of the manic vocalist. I watched them for nearly an hour. They played number after number without a pause during that time. Whatever he was taking I would like some of it.

I did not have the opportunity to spend much time watching them. A massive crowd was spellbound at the antics of The League of Mentalmen. Dressed in skirts, Mohican headdresses made from many coloured belts, leggings and lots of hairy chubby flesh they looked amazing. They made me think of The Village People on speed. Their numbers, which included covers of rock songs given a manic twist, blasted out across the tent to the delight of all. Their outrageous costumes, prancing about like broken necked chickens and the thunderous music had the whole tent rocking.