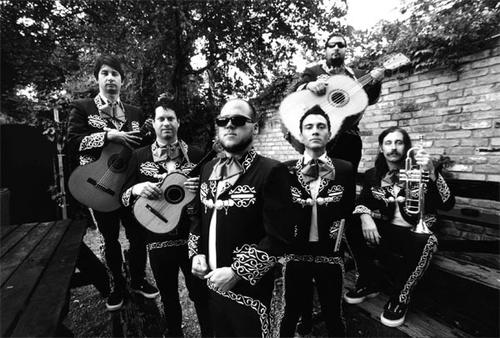 No doubt you’ve re-read the title of this post and are still having trouble coming to terms with the dreadful pun I’ve tried to shoehorn in. Remember Terrorvision? They did that song about drinking that amber/sometimes clear liquid that also involves snorting salt and then squeezing lemon in your eye? Now read the title again. If you still haven’t got it, go tip salt in your ear and shove a lemon up your bum.

Who knows what The Bronx, or should I say Mariachi El Bronx were smoking when they came up with the idea of doing a Mariachi-style album. The seeds for this were rooted in the intro track on their 2nd self-titled effort and it’s been 3 years since this album has come to light. Note: this is not a side project, in all respects; ‘El Bronx‘ is a Bronx album and their 4th full length, albeit a distinct departure from the caustic vitriol that was present on their first 3 records. My knowledge on Mariachi isâ€Â¦wellâ€Â¦this album basically. I have none; in fact, this will be my first step into listening to this type of music and hopefully not my last.

Those familiar with the vocal talent of Matt Caughthran will be surprised to hear that the teddy-bear faced frontman has changed from sounding like the bastard offspring of Henry Rollins and an enraged bull. On ‘El Bronx‘ his voice is uncharacteristically heartbreaking and deceptively delicate. This isnâ€™t to say Caughthran has gone soft; his familiar ragged vocal lead his still present, but instead of pummelling the listener, itâ€™s a soothing alcohol burn of warmth and melody. Take ‘Cell Matesâ€™ for example; after the flourish of exuberant trumpets and intricate guitar-plucking, Caughthranâ€™s voice flows with deft elegance and smoothness. Itâ€™s a quintessential summer song that glides along a lazy yet skilful beat. â€œHonestly, will you wait for me?â€Â he croons, singing with such passion and believable loss, youâ€™re convinced he really is spending a considerable amount of time behind bars, pining for his lover to stand by him. Percussion is sparse; resulting in steady drum rolls and bouncing patterns of sound that dips in and out of several tracks yet remain a constant militant marching band-style backbone in others. The emphasis really is directed towards guitarists Joby J Ford, Ken Horne and Vincent Hidalgo (of The Drips fame, who incidentally plays the guitarron, a large 6-stringed acoustic bass) whose layered arrangements are astonishingly elaborate and intricate. Those cynical readers maybe wondering â€œpfft, it must all sound the same thenâ€Â â€â€œ you couldnâ€™t be more wrong. For every summery leap of juddering guitar and horn blast, thereâ€™s a Mexican-ballad (the luscious, dreamy infection of ‘Sleepwalkingâ€™) to the big-band thunder blast of ‘Silver Or Leadâ€™, which would perfectly soundtrack almost any professional dance style (save ballroom and the quickstep!) to the jaunty sea-shanty swagger of ‘Clown Powderâ€™ which wouldnâ€™t look out of place inside a bar from the Old West, nor would Caughthranâ€™s wolf-like howl of triumph in the songs coda.

Typically of The Bronx, themes revolve around death and the afterlife, with possible explicit links to the day of the dead, particularly on the touching, yet mournful ‘Quincenieraâ€™, which despite being about the coming of age ceremony celebrated by Latin-American girls; focuses more on how weâ€™re one step closer to the grave. â€œEvery night I get olderâ€Â yelps Caughthran, his voice cracking with splintered emotion, whilst the chorus of â€œthe dead can dance if they want romance, all I need is some airâ€Â takes a different path, focusing on celebrating a departed personâ€™s life, rather than mourning it. To counter-balance this, they also focus on the most hurtful of all emotions: love and the unity between two people who have become separated and desire to be with one another again. This is particularly so on the enthusiastic stomp of ‘Despretadorâ€™, which sees Caughthran taking the role of someone preparing for the return of a loved one; â€œIâ€™ve been planning this meeting for days, carefully placing my words, come back to me little girlâ€Â he wails, backed by the oom-pa-pa ramshackle of spirited South-American harmony. ‘Holyâ€™ takes an almost calypso-style backing beat, laced with sombre vocals, swirling dramatic string flourishes and jagged guitar plucks of despondence and intimidation.

In many respects,Ã‚Â  ‘El Bronxâ€™ does share common ground with The Bronxâ€™s usual hardcore punk racket, despite both musical endeavours weight at the opposite end of the genre spectrum. Passion for one thing; the bleeding sincerity of Caughthranâ€™s outstanding voice, which dips from a heartfelt croon to a boisterous chant (similar to the way he changes from a boisterous Yankee cowboy, to a screaming maniac on previous efforts). The musicianship, whilst different, shares that same meticulous tightness and raw, focussed determination, especially the huge body of sound created by guitarists Ford, Horne and Hidalgo. This isnâ€™t to say that the differences arenâ€™t staring you in the face; they practically scream blue murder, jumping up and down like some ADD-Zebedee, high on the most potent coffee known to man. Elements such as the demanding trumpet arrangements provided by Brad Magers, not to mention Jorma Vikâ€™s elegant, yet light percussion and the luscious strings open doors to new and exciting prospects, collaborations and touring partners for the Los Angeles 6-piece.

I said in my review of ‘IIIâ€™ back in December last year that their 2008 release was â€œthe strongest collection of songs of their careerâ€ÂÂ  ‘El Bronx‘ however, romps home with that title and is testament to the truly superb bunch of musicians this band has become and an act you want to see go on playing forever. My only question is: â€œwhen will we see another Drips album?â€Â