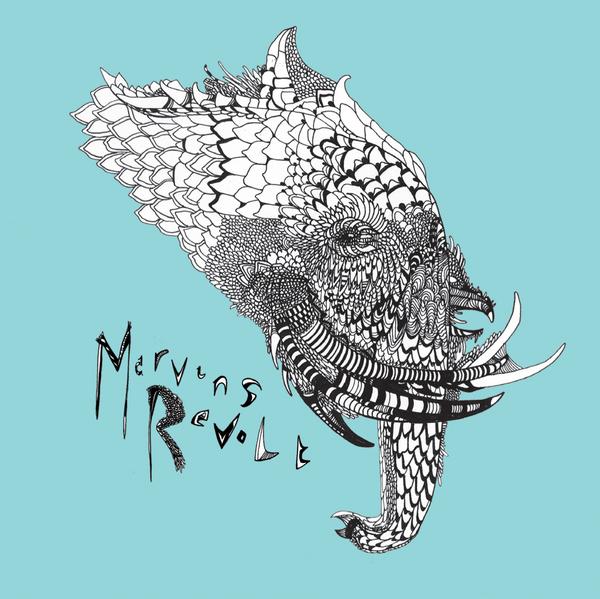 Marvin. Sounds like the name of the poor bastard bully-magnet at school. You know the one – he carried a briefcase, had sellotaped glasses, smelt of cheese crisps and was head of the science club. Alternatively he could be a Martian who has an intense dislike for a furry carrot-munching mammal. I suppose though picking a geeky, possibly unlikeable-sounding name works. Look at the Melvins – named after some dude who Buzz Osbourne used to work with and hated with a fiery passion and they’re one of the most almost grunge-metal-what-the-fuck bands in the world!

Marvins Revolt seems an unusual choice of signing for the Richter Collective – an Irish record label that has provided the deranged ‘spaceship-being destroyedâ€™ splatter-rock of Adebisi Shank and the dance-punk/monster obsessed ramblings of BATS and the rough-shuddering stomp of Hands Up Who Wants To Die. However, thereâ€™s nothing like a smattering of diversity in the ranks to escape the notion that your label only caters in mangling eardrums and Marvins Revolt add just that. Originally the band (then a four-piece) catered a more noise-rock approach. However, 2 albums down the line and a member down, they now focus their energies in a different musical direction. Whilst their previous material may have more to my tastes, the songs on ‘Patrolling The Heightsâ€™ tap into that softer side of my psyche that favours the more melodramatic side of rock, that focuses on layered instrument-progression, haunting vocals and rich drum textures.

Opening track, ‘Siberian Outer Boundriesâ€™ blends the atmospheric wash of a lone man, pouring his heart out in deserted church; his voice bouncing off the hard stone walls, whilst the passive guitar strumming supports his hushed tones perfectly. It morphs swiftly into second track ‘Siberiaâ€™ under this mellow haze, before kicking into a simple, yet strong drum march, that builds on a deliberate, pounding rhythm of stomping feet. The guitarist deviates from intriguing time signatures, to standard indie-rock strumming at each drum roll and pause, building on a more progressive and slightly-heavier nature as the track comes to a conclusion. The vocals rise and soar with youthful eloquence and the accompanying synthesised backing is a delight.

The juddering build of guitars on ‘Antique Markersâ€™ gives a rough, punk-influenced edge, that dissipates beneath the soothing flow of those haunting vocals and jerky drum beats. Thereâ€™s a distinct fuzz of washed-out noise pop within their somewhat erratic sound that holds everything together, like parcel tape. ‘Patrolling The Heightsâ€™ has that feeling of a gentle mish-mash of styles and influences, all making themselves know in a rather timid way, that gradually builds in confidence, before departing without over-staying their welcome. ‘Organize Your Armsâ€™ is perhaps a perfect example of this. One minute itâ€™s all angular spikes of indie rock blades; the next itâ€™s bouncing along with a distinct Beach Boys-summers-day vibe of plinking keyboards, exuberant high-fives and gang vocal choruses.

‘Doctors, Hospitalsâ€™ sounds like something that should be sound-tracking the next eccentric, indie-film by Wes Anderson, or Juno 2, with its gentle, rising introduction, twee-pop guitar-twangs, vocal harmonies that eventually flow into the rushed, yet luscious musical dexterity of spiralling heavy guitar rock and throbbing drum hits. However, itâ€™s the kind of ramshackle ambitious attempts such as ‘Like Wiresâ€™ with its mellow string postscript and sweeping grace that really make Marvins Revolt stand out.

Itâ€™s difficult to find any fault musically â€â€œ despite some parts feeling scattered; they tie nicely together through an excellent build up of well constructed tunes and arrangements. The vocal-tone seems incredibly young and earnest, as though theyâ€™re desperate to please, but passionate, with this eager sense of self belief and optimism. Well worth investigating.