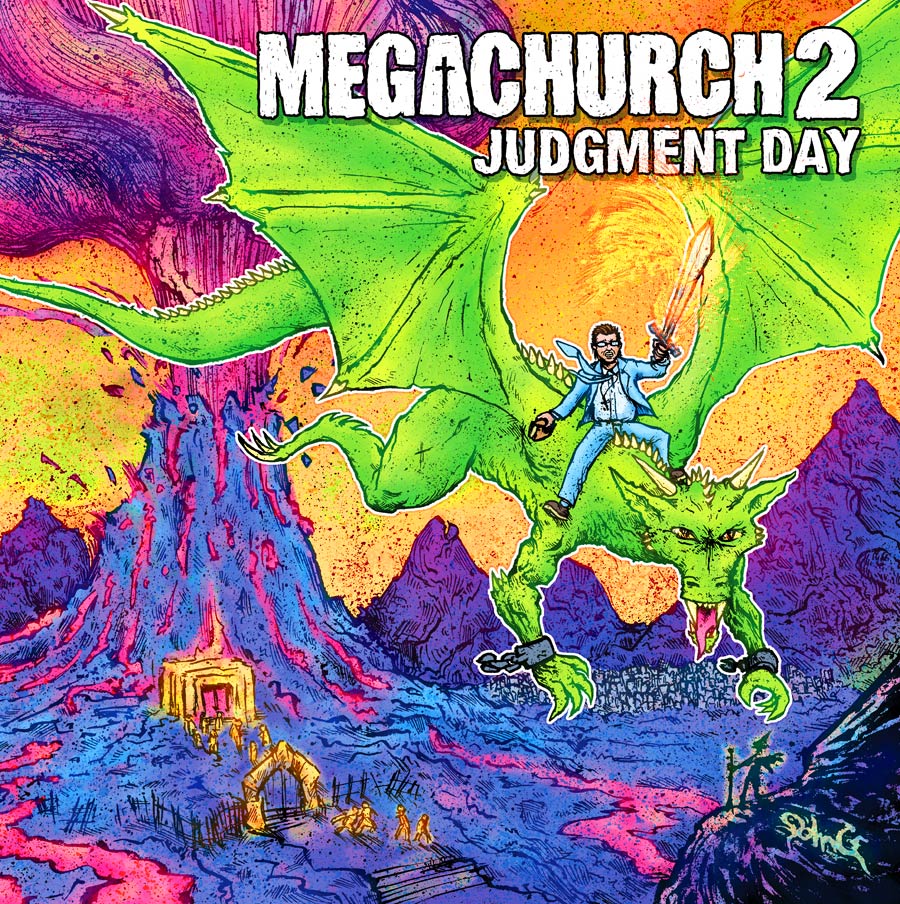 Band – Megachurch
Album – Megachurch 2: Judgment Day
Label – Stressed Sumo Records
Release date – out now
Sounds like – almighty hellfire raining down on those who take the name of the Lord in vain (whilst getting baked on some great weed)

I wrote some nice words about Megachurch a few posts back, praising them for being…well…really great.

Their unique brand of raucous, crunching rock is deeply unnerving, chaotic and hilarious in equal measure, as is their delightful album artwork. Yes, what I want to see is a bespectacled man wielding a fiery sword in one hand, a bible in the other,Â  riding a massive dragon as pink hot lava bursts forth from a blue volcano, swamping the landscape.

Hailing from Cleveland (home of the rock ‘n roll hall of fame) Megachurch are a three piece, (Dan, Brian and Mikey) comprised of two bassists, a drummer and an army of fanatical bible-bashers. What this equals is quite simply, some of the weirdest, yet most entertaining and unique music I’ve heard since the last lot of crackpots. You’ve got stonerjam-sessions, taunt balls-out, pure rock fury, splatter-gun punk and some truly seedy and scything basslines that sound like immoral braying laughter.

Megachurch stir up a wickedly humorous storm of extremist styles and frenzied sounds to create a unique set of impulsive battle hymns..

The way Megachurch use their samples, is fantastic – and it’s probably the best use of sampled dialogue in music since Please Inform The Captain This Is A Hijack. Rather than just being tacked on the end or at beginning of a song, Megachurch intrinsically weave these ranting religious snippets of speech into the structure of their songs and into their riffs – take Speaking in Tongues for example, which combines garbled, maddening cackles in with the song’s spazz-rock time structures and see-saw basslines.

On the flipside, The Second Coming is just truly disturbing and weird – mixing both English and possibly Spanish from a particular rabble-rousing sermon, (that gets more and more fervent and feverish) over steady drumbeats on a track that sounds like it’s preparing to charge into a fanatical holy war.

Opening track Resurrection starts with the hillbilly yell of “AT 2:19am MY BROTHER BEGAN TO STIR IN HIS COFFIN!” followed by a lurching, sleazy bassline that sounds like it was stolen from a Death From Above 1979 recording session (yeah, it’s a bit sexy) “THE DEAD ARE BEING RAISED!” then it all goes to hell. Duelling four-strings, weave and twist with dirty, sinful thoughts, whilst the drums thunder this sleaziness forwarded into hell. That takes 89 seconds. This segways nicely into Teabaggers; a tense, heavy thumping blast of radiating power that slowly changes. We’re told to listen up, that even though we’ve made mistakes, America is GOOD! But it all goes bad…the vocals distort and become more…well…wrong. Megachurch relish this – they pounce and attack, driving this rhythmic, choppy stamp of bludgeoning noise forward with a wickedly gleeful smile. It’s like if the Joker formed a band with the Riddler.

What sounds like Johnny Cash telling us “she’s far too young to die..” followed by a cleansing ricochet of gunfire, signals the start of Battle Hymn of the Republican. Changing speeds from a steady chord progression, to a reckless, fast-paced gnarly punk shred, Battle Hymn spins deeper into the darkness, complete with some superb drum rolls and progressive-rock heaviness. The evangelical preaching on My Father’s Dignity superbly fits with the ground-scrapping, bass-drone that accompanies it; “I DON’T WANNA BE ONE OF YOU! I DON’T WANNA BE ONE OF YOU, WEAK MEN!” roars the maniacal reverend. It becomes a battle cry, accompanying the tribal clattering and caterwaul emanating from Dan, Brian and Mikey who sound like they’re sacrificing their instruments rather than playing them and it’s bloody brilliant.

The Don Caballero stomp of We Are All Witnesses, shows just how chaotic and progressive Megachurch can stretch their sound – switching up from a wall of rumbling, baleful math-metal, to a contorting and shifting slab of howling stoner-rock. The melding of sampled strings between this and Judgment Day, is eerie and uncomfortable, especially when the drums kick in. There’s no vocal samples here, just a wall of punishing, righteousness from the twin-bass attack; whilst The Gay Agenda is all tribal drums, breakneck speed, Dillinger-math-punk time signatures and crazy sampled rantings about homosexuality.

“You know, there’s nothing this generation needs more than a baptism of old-fashioned hellfire and preaching…”