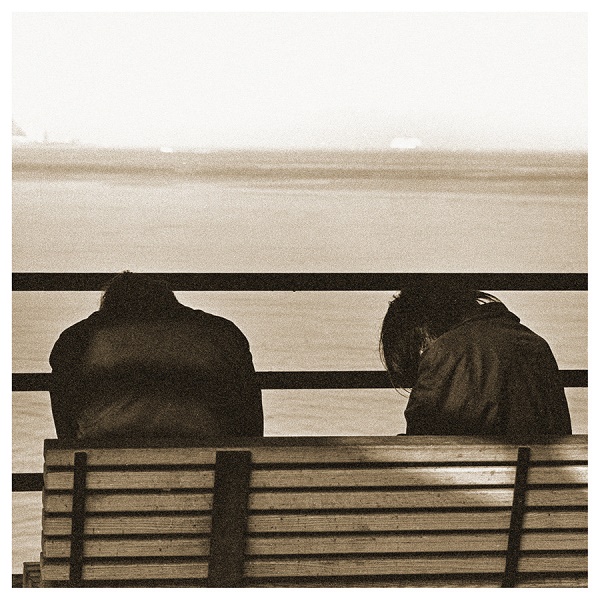 Band: METZ
Album: II
Label: Sub Pop
Release date: 4 May 2015
Sounds like: A guitar up-ended in a barrel of toxic waste on fire.

The kind of punishment drummer Hayden Menzies inflicts on his poor kit makes you wonder if he’s got some boiling hatred burning inside for his particular piece of percussion. You see, on METZ’s first album, cunningly titled METZ, he is the frontman of the band – or rather, his drum kit is – thumping out a barbaric and unrelenting cacophony from start to finish. On II, their follow-up to the 2012 hit machine, it’s more of the same volume-wise – and thank god. At the production helm again is Holy Fuck‘s Graham Walsh and Alexandre Bonenfant twiddling the knobs and making sure everything is cranked up to teeth-rattling o’clock.

METZ isn’t a band that you can listen to at a comfortable volume – try turning down either this or their debut on any stereo and the button will either a) not work b) get progressively louder c) explode a gaping hole through your chest for trying to attempt something so stupid as control METZ and their sound. If anything, II is a more savage beast  – it’s a howling scourge of twisted, gut-wrenching noise that dredges the muck-infested lake with rusty, inviting hooks that will claim just about anything they snag on to and boy, are those hooks big.

II by METZ is  full of pulverising, Jehu-riffs, crudely stapled together with raw, fractured distortion and is something to be cherished..

There is more of a grunge-element to their dishevelled screech than was present on the turbulent cacophony of their debut, giving II this sleazy, guttural whine. Take opening track Acetate for example; it begins with a crunching, gnarled bass rumble, some crackling feedback and then lurches into this jagged, post-hardcore-noise-laden shriek. Frontman Alex Edkins strangles rusty chord after rusty chord out of his guitar, whilst screaming to “take…take away these thoughts…” possibly of dead men floating. It’s a savage and bloodied opening that sets the tone for the remaining 26 minutes of snapping distaste.

Ending in a breakdown of chopping feedback, Acetate morphs into second track, The Swimmer; beginning with a buzz of screeching guitars, a tinny drum-build and some muted and muffled vocal murmurings that then vomit forth a thundering, bass-heavy drive of snarling punk rock rage and disgust. This strong early Husker Du-vibe of venomous outpouring is taunt and vicious to the very core. The near five minute bludgeon of the slurred grunge-rock rip of Spit You Out tones down the neck-damaging speed, but still retains the churning and turbulent see-saw noise. There’s even an attempt and what might be a guitar solo, whilst culminates in a juddering, twist of Drive Like Jehu-style choppy-shredding that gets the Rik Froberg seal of approval. The buzz-saw guitar blast of I.O.U. contorts into a crunching punk rock fist to the face, grizzled vocal barks and hissing feedback. Landfill takes a twisted descent descent into darkness beneath the tortured post-punk guitar squeals and bludgeoning drum patterns, all of which is summed up by the just about audible, mumbled rasp from Edkins “I don’t know what I believe in…all this shit keeps piling up.”

After some fractured, distorted piano-tinkling, Edkins lets out a throaty roar as Nervous System erupts forth – 2 minutes of blister-inducing, caustic hardcore clatters past with teeth-gnashing urgency. This wild rabid dog-fury is only further heightened by the wailing spaced-out guitar screeches and tense, Refused-style madcap desperation and it’s utterly cathartic.

I’ve a feeling that II is mostly born from pain – the harrowing scrape of Eyes Peeled,  begins with the line “I’m not in love with who I am/Just barely holding on to anything I can..” shows the frustration and bitterness pouring out of METZ as they clatter through this 2 and a half minute romp of scuzzed-up garage punk. Tension is held at knife-point during the festering creep of Kicking A Can Of Worms, which crafts huge walls of sludge-rock disdain, mixed with scything stoner-punk grit and finishes in a roaring storm of ugly, tainted feedback and nerve-rendering noise.

There’s no comfort here, because II isn’t about that – Messrs Edkins, Slorach and Menzies aren’t built that way either. This is METZ and their pulverising, Jehu-riffs, crudely stapled together with raw, fractured distortion is something to be cherished.