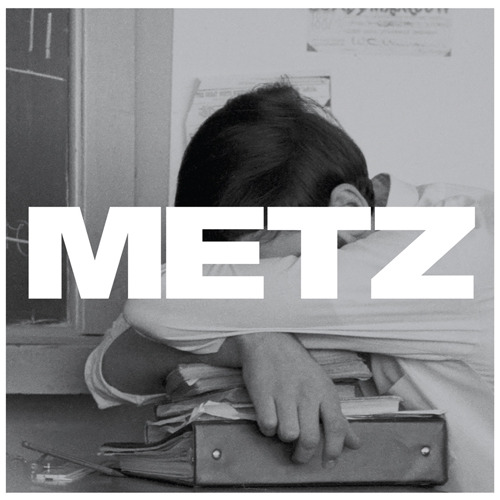 This collection of songs sound like theyâ€™ve been recorded on an old ghettoblaster in a garage, with the drums set up almost on top of it. Play and record have both been pressed and the band have thought â€œfuck it; letâ€™s just play until we get bored.â€ In reality, â€˜Metzâ€™ was recorded in an old barn with help from one of the keyboard dudes (Graham Walsh) from Holy Fuck and producer Alexandre Bonenfant.

Metz sound uncomfortably feral. Their punk rock is stripped clean of any pretensions, overdubs, tweaks or crispness. Itâ€™s a salvo of discordant anarchy and strife. It sounds like it was recorded in the 80’s and someoneâ€™s only just found the tapes, covered in grime and sludge that was never wiped off. Comparisons fall neatly into place â€“ Drive Like Jehu for the raw scrape and barked lyrics; The Jesus Lizard for the sinister stop-start dynamics and of course, Steve Albini for the shear steely, spiteful determination. If any of these tick the right boxes or give two very enthusiastic thumbs up signaling â€œYES! THIS IS WHAT I LIKE IN MUSIC!â€ then Metz could be your new favourite band.

Opening track â€˜Headacheâ€™ opens with drumsâ€¦lots of drums, big rolling drum beats that dwarf everything else. The guitar cuts in, straining to be heard but they exist, oh boy do they exist. The vocals sound like theyâ€™re lost in the warp â€“ howled through a cracking, broken microphone in some distant realm, whilst guitars squeal and writhe over the solid rhythmic attack. â€˜Get Offâ€™ sounds like an early Rocket From The Crypt track (pre-brass section) and wouldnâ€™t look out of place on â€˜Paint as a Fragranceâ€™. Vocally, it gives nods to Speedo and Rik Froberg, if there voices were layered over each other, whilst the garage rock barrage is tuneful (to a point) and feels like that swami-sound; if that swami-sound had been living in the dirt for the last 10 years and was starting to rot away.

The noise-rock of the erratic â€˜Sad Pricksâ€™, which stops and starts with such a stuttering gait fills the quota in the sinister ranks, as does the drumming, which gets progressively louder and more irregular, as the vocals try desperately to be heard. It sounds as if guts are being spilled in the last 30 seconds as the barking, maniacal words struggle to make it over the wave of cymbal crashes. Its utter chaos â€“ and rightly so. â€˜Ratsâ€™ is the partner in crime, focusing more on guttural screams and dark, shifting guitar tones and squeals.

â€˜Wet Blanketâ€™ is just under four minutes of roaring perfection. From the opening, strangulated guitar fuzz, to the â€œWHOOPâ€, to the boisterous swaggering garage rock scuzz, it absolutely slays. The mid-section, which is dominated but the same washed-out bass riff, that creepy guitar hum and trash-rock drumming that slowly builds to a fist-in-the-face of noise-punk debauchery, that flits back and forth between speaker channels â€“ god, itâ€™s so viciously untamed and hectic in execution. â€˜Wastedâ€™ feels like spiraling decline of a man with no self-control. The inhuman cries of â€œYOUâ€™RE WASTED!â€ coupled with the sledgehammer attack of spiteful, acerbic bass-driven rock feels like a descent into madness (especially on the scribbled scrawling of the songâ€™s coda).

Metz is a loud, uncompromising bombardment of heart-racing noise. It’s jerkass punk rock; in the sense it feels like Judd Nelson punching you in the back of the head for 30 minutes. There’s nothing depressing about it though; it feels like a release, a fitful explosion of loud pent-up energy and raw power – an utterly essential and anarchic listening experience.

Also, it reminds me of Husker Du‘s live album, ‘The Living End’ which can only be a good thing.