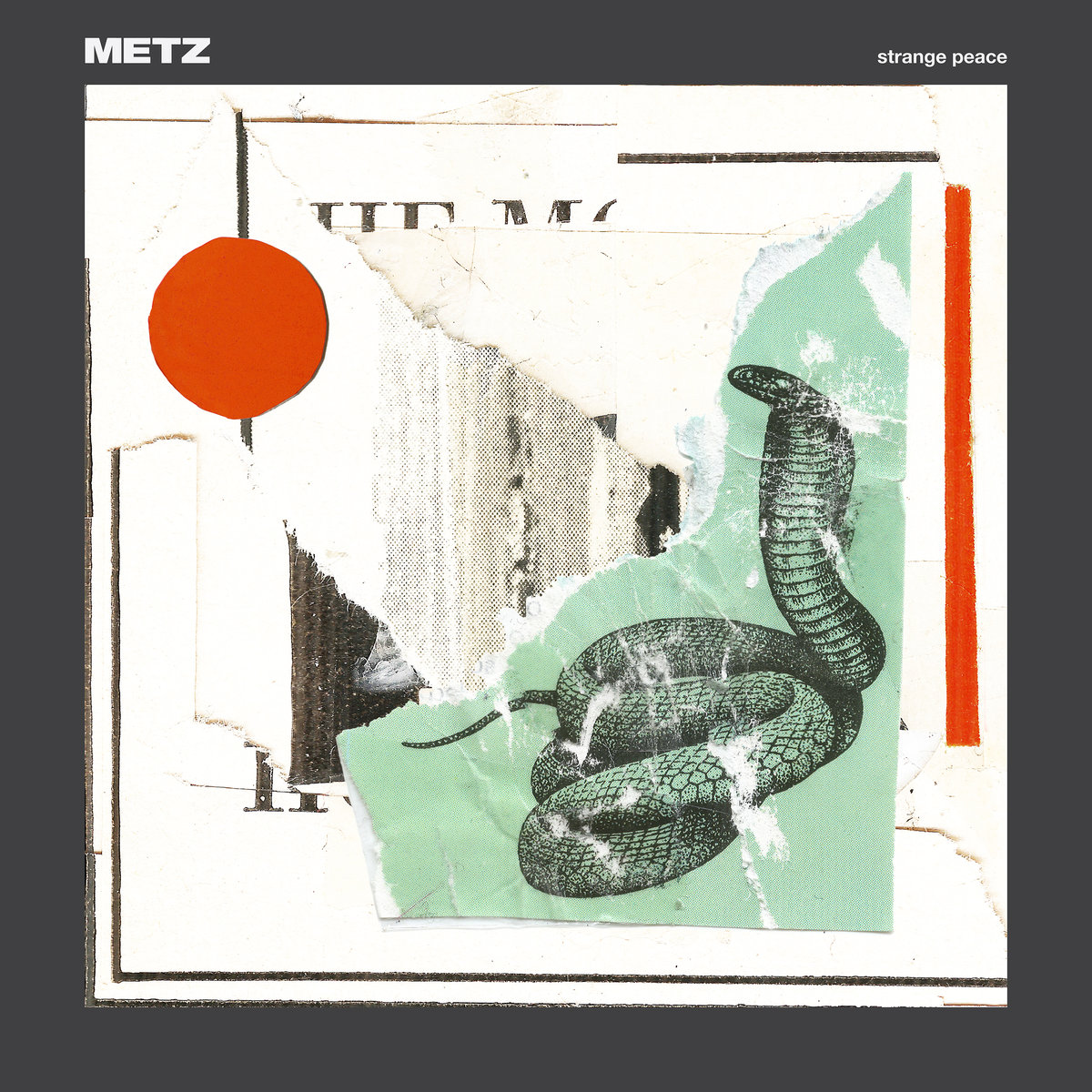 Band: METZ
Album: Strange Peace
Label: Sub Pop
Release date: Out now
Sounds like: Wires wrapping around your neck. Being encased in cellophane. In a hole.

“Like the cannibal silence, dragging on for so long…”

The words “you are rolling” (uttered by producer Steve Albini) open Strange Peace, the third album from professional angry nerds (thanks Liam Gallagher) METZ and already it’s got my mouth salivating. From their debut and the follow up, (2015’s II) METZ retained a significant style. The drums kept up their pulverizing brutality and the guitars and bass scraped and chopped through a hell dimension of demons, whilst vocalist Alex Edkins spat all manner of snarled, disgruntled lines about headaches and cans of worms.  With Strange Peace, this feels exactly like the direction METZ should be progressing towards to expand their acerbic sound.

METZ hit the ground running, or rather, absolutely demolish all barriers with the teeth-rattling barrage that is Mess Of Wires. This is more a freight train continuously building in speed and chattering noise, as the drumming of Hayden Menzies is an almost direct parallel to the sound of clattering wheel rails, chewing to pieces everything in its path. “MAKE! THE SOUND!” snarls Edkins, his slovenly vocal drawl tainted with indifference, as he strains to be heard over the gurgling thump of Chris Slorach’s murky bass. This is a basic lesson in complete demolition, spread over 3 and half minutes and it’s beautifully raw, especially in the song’s chaotic conclusion.

The strained feedback wail into the shrieking Drained Lake will have you scrambling to stuff the teeth that have been knocked out of your head back into your mouth, just so you can feel them set on edge again. Slightly faster than the opener, Drained Lake is a discordant rant of resentment, especially in the basic “fuck off” chorus of chant of “I won’t do what you want.” Also, the guitar tone is chilling – it’s as if someone has asked METZ to create a song from a horror film soundtrack, but instead they’re playing it backwards. I keep expecting some evil subliminal message to bleed through the screech of scornful noise.

The fear continues on one of the darkest tracks, in the form of the grunge-rock slide of Cellophane. From decoding the lyrics, it seems to be from the viewpoint of someone trying to locate a body (wrapped in the aforementioned cellophane) they’ve buried, but are unsure of the exact location and are frantically digging in the dirt to find it. Grim and dripping with foreboding, but it’s the music that accompanies said lyrics that really set this off down a pathway laced with terror; the blunt and feral attack of the bass and drums, churning out this slovenly rhythm, whilst the guitar fizzes and crackles apart at the seams. What even sounds like a “solo” is mangled beyond all legibility as Edkins goes full Scogin in his attack on the six strings, possibly ripping them from the instrument with his bare hands, smearing blood everywhere. Also, I’ve no idea if it’s the guitar making them, but what sound like backing-vocal harmonies on the chorus are wonderfully creepy.

A sense of unease exists on the see-sawing twang of Caterpillar – it’s sombre and morose tone is devoid entirely of percussion, focusing on this hypnotic guitar tone. Edkins sounds as if he’s in a different universe; his vocals are hollow, unfeeling and utterly blue screen of death. The chant of “I fell in” only cements the uncomfortable mood. That sense of unease isn’t going away soon though, the white-noise throwdown of Lost in a Blank City hums with a seething growl; the drums are a tribal crunch of aggression, whilst the bass howls and roars with this pedal-stomping fuzz of caustic tension. It’s ugly, angry and furious, leading nicely into the punk-ish thrash of Mr. Plague and its meaty, guitar scribble and screams of “PLLLAAAAGUUEE!” Lovely stuff I’m sure, with amps pushed to breaking point, this volatile spit of near-melodic fury is a wrecking machine.

The award for creepiest METZ song goes to the desolate and slow meander of Sink, a track driven by Menzies’ robotic drum fills, creaking riffs and weird background chimes. It’s the studio noises in-between though, the “throw it in” element that hums beneath the surface, threatening to break through. We return to reality somewhat with Common Trash, which sounds like it could have fallen off either of their first two albums; the buzzsaw riffs ugly feedback and distortion is ripe on this slacker-rock churn.

As closing track Raw Materials skips into view, shifting from this breathless caterwaul of indignant and hostile feedback to almost calm passages of alt-rock before exploding into a Nirvana-esque venting of tortured, squealing menace, Strange Peace clatters into the trainyard, bursting through the panels at the back and emptying its cargo over the platform.

The brilliance about METZ is how refreshing all this sounds – they’re hungry for blood, practically licking their collective lips. The riffs are just as dirty and determined as ever and it’s this reckless, venting power that they emit no matter how fast or slow they attack their instruments that is all consuming. They’re 3 for 3 now and from the sounds created on Strange Peace, they’re fucking pissed at everything – let’s join them.