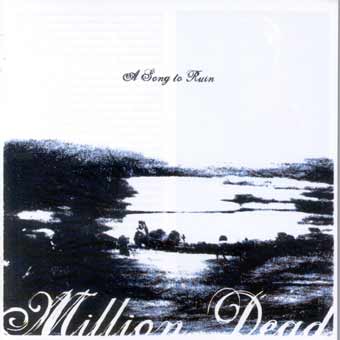 It appears that Million Deadâ€™s debut album ‘A Song To Ruinâ€™ is a bit like frog hair and hen’s teeth, (Amazon marketplace want Ã‚Â£14 for it used and what I assume is the Japanese release is going for Ã‚Â£52!) so the good people at Xtra Mile Records are re-releasing the 2003 pot-hardcore noise-a-thon, complete with bonus tracks and a dvd featuring their last ever London show in September 2005, the last show with Cameron Dean (ex-guitarist) and all the promo single videos. Not bad that. The asking price of Ã‚Â£20 on Xtra Mileâ€™s website is a bit steep, but I think thereâ€™s been a mistake as â€™Ã‚Â£19.99â€™ has been crossed out and replaced with ‘Ã‚Â£19.99â€™ again, so could be a typo of sorts.

In any case, those that are familiar with Frank Turnerâ€™s work, but never really heard the stuff he did before ‘Sleep is for the Weekâ€™ or ‘Love, Ire and Songâ€™ should seriously consider getting ‘A Song To Ruinâ€™; plus the inclusion of single-only release ‘I Gave My Eyes To Stevie Wonderâ€™ (which is one of their best songs) and ‘Medicineâ€™ is a nice touch.

Frank Turner is set to release a new album in September entitled ‘Poetry of the Deedâ€™ (pun-tastic!) in September via Xtra Mile and Epitaph. (Cheers to Punknews for this and the above info!)

If anything, this news has made me put ‘A Song To Ruinâ€™ on again and it still fucking rocks, especially the bit at the 2:30 mark on ‘The Rise and Fallâ€™ where the drummer starts screaming. EPIC.

‘I Am The Partyâ€™ (featuring some nice MTV2 tags at the top) by Million Dead.