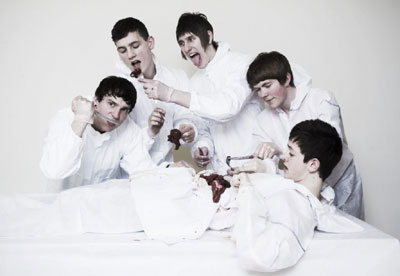 This is just a brief ‘bringing together’ of musical oddbins that have been floating around recently and haven’t really got a proper post of their own because I can’t be bothered and slapping them all together in one poorly constructed article is the best bet of it ever seeing the light of day:

Last night I saw Down I Go, which is always a musical treat and at the risk of repeating myself about their space-shuttle-exploding performance, (Iâ€™ve blogged about them a lot) you can be rest assured that they were suitably brilliant.

Betty Pariso are an interesting selection. Some notes on their set:

1.) Songs seem to barely make it past the minute mark.
2.) Their singer spends most of the set with his back to the audience, except when heâ€™s crashing into the poor unfortunate sods who have decided to stand at the front and suddenly develop ‘beer hair.â€™
3.) One of the guitarists is content to flail and swing his instrument around his body like itâ€™s some kind of extra appendage he canâ€™t get rid of.
4.)In places, their music can be best described as grinding drumbeats and disenchanted vocals under a scrawling fuzz of mangled noise. Hardly any of it is clear, but for the most part, it’s ungodly in all shape and form.
5.) They sound like Some Girls, stripped of their punk attitude, only for it to be replaced with crust-heavy blast beats and a distinct low-end hum of pulsating dread.
6.) The only words spoken save for the incomprehensible roars from their checked-shirt vocalist, are a ‘thank youâ€™ as the last mind-crushing bars of noise fade out.
7.) In conclusion, Betty Pariso are pretty rad, prompting 2 enthusiastic thumbs up and a request for some recorded material. More of this sort of thing please. Half of Youves donâ€™t look old enough to get in to see a 12A on their own, let alone be in what is essentially a pub with an ‘upstairs bit.â€™ As a live band, their flamboyance and showmanship is excellent; whilst not essentially camp, they ooze elaborate confidence from ever pore. The songs tonight sound as tight as their jeans on one of their guitarists, while their vocalist exhibits the unhinged nature of a man thatâ€™s been doused in itching powder and then given an electric shock. At one point he starts smacking a drum thatâ€™s been left in the middle of the floor with both hands, screaming at the top of his lungs without a microphone. What amused me most was that he appeared to be wearing slippers and a vest, giving him the impression of an indie-punk Rab C Nesbitt. Great fun, essentially channelling some elements of Freddie Mercury-meets-Les Savy Fav in places, Youves make dance-punk sound fucking incredible.

This is old news, but itâ€™s something to blog about: Johnny Foreigner have released 3 new songs for free download on their website. All you have to do is click on the link here, enter your e-mail address and youâ€™ll be sent the link to download from!

It’s another ‘late to the party’ scenario with me and Johnny Foreigner. I suppose at the time when they were just starting to get noticed my attentions were primarily focused on another band with an even stupider moniker and the possibility of liking to bands with the slang reference for condoms on my ipod was deleted from my mind. This obviously makes me an idiot, as Johnny Foreigner are pretty awesome and if they can produce more tracks like ‘Feels Like Summer’ (easily the best track on this freebie) then their second album is going to be a indie-‘Punk In Drublic.’ (Makes no sense.) This summer-themed ditty roars past in just under 2 minutes of exquisite shouty-boy/girl pop-punk that Iâ€™ve pretty much had on repeat for the last few days. The insanely catchy â€œSOME SUMMERS! SOME SUMMERS!â€Â chant at the beginning, followed by the verse-trading back and forth between guitarist Alexis and bassist Kelly is truly wonderful and could well be their undisputed anthem – absolute class.

Those looking for some good mixes to rev your car to/relax in the garden/drink until you start stripping naked (delete where appropriate), should direct their download fingers and high-speed internet connection to Nialler9 blog to download Adebisi Shankâ€™s Medieval Summer Mixtape (with introductions by Sting!) Itâ€™s actually pretty decent, with some nice 80s treats, bit of rap and a scenario of simplicity, a scenario of you and me.

Future of the Left ‘Travels With Myself And Anotherâ€™ review.
Mad Mac 6: City Under Siege
Free Pie
Free Brian
Freebird