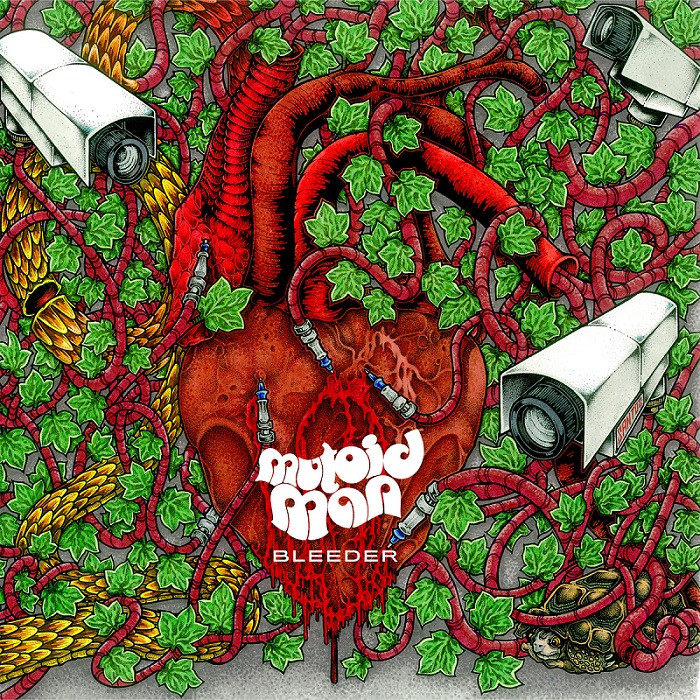 Well, if this doesn’t punch a wet, viscera-coated hole through your chest, I don’t know what will. Mutoid Man are Stephen Brodsky, Ben Koller and Nick Cageao. You’ll be familiar with Brodsky – him of Cave In fame, making huge crushing space rock jams (Big Riff!), Koller briefly drummed for Cave In before becoming the stickman for noise-hardcore thrash-merchants Converge. Think of Mutoid Man then as a combination of these parts, with a hefty dose of shrieking Priest/Maiden metal thrown in for good measure, elements of warped prog-majesty and a whole lot of speed.

It’s ridiculous how mouth-frothing and rabid Bleeder is from start to finish – 10 tracks in a frenzied 29 minutes blast past at an unsafe and dangerously chaotic, neck-damaging rate of knots and it’s fucking brilliant. A dirty, scuzzed up guitar drone floods through on opening track Bridgeburner, which steadily builds over a gurgling, sonic-bass whine, before bursting forth into an upbeat blast of spiralling, psychedelic colour and razor sharp riffage, ending in a bloody, damaging crescendo. There’s no time to catch a breath as the pummelling drum-intro of Reptilian Soul makes itself welcome, a bending, claustrophobic twist of Dillinger Escape Plan jazz-rock nuisance. Brodsky’s voice hitting a weird peak between classic 70s rock shriek and a robotic chant on the title track, where he states in quite a mechanised manner how cold blooded he’s become over the thrash-metal curve of twisted, stuttering lunacy.

Sweet Ivy is deceptive at first – the opening 18 seconds are a trickle down of teasing, somewhat innocent and innocuous notes, before launching into this scything caterwaul of frenzied, scratching punk rock majesty. Credit to Koller’s drum work, which is a mesmerising scatter-gun of conflicting, ever-changing styles – bashing through seizure-inducing time changes and stop-start, breathlessly erratic passages that shouldn’t fit together. It’s the kind of emphatic delirium of colours and chaos that was last heard pumping out of Torche’s pink-unicorn bubblegum-sludge-pop that was Harmonicraft and the brutality of Koller’s Converge. The off-kilter destruction of 1000 Mile Stare is the stand-out track on Bleeder – a thrashing, cymbal crashing brain-melt of fist-pumping joy. The way the track evolves from a punk rock beatdown to a full-on riff-monster glitter-ball of untamed, roaring power is something truly special. Brodsky employs his clean/harsh vocal mash-up that was present on Cave In’s Perfect Pitch Black to great effect and his rage an incandescent blast of rampant fervour is infectious and delightfully evil in equal measure. Surveillance sounds like a lost Converge track that was ditched for sounding too “fun” – Brodsky’s cry of “WATCHING ME! WATCHING YOU!” near the song’s ever-more-aggravated and malicious ending and his Rob Halford wail just makes it so, so, SO cool.

You can tell Mutoid Man are having the time of their lives – especially Koller, who is an absolute animal behind the drum kit – his stick-work on sixth track, Beast, reach almost blast-beat levels of drum-ishment, as Brodsky and Cageao attempt to splice grind, thrash and metal into a bare-two-minute window of sweating pandemonium. Dead Dreams sounds like a beefed-up version of Rush for the most part, the progressive build and see-sawing showmanship soon evolves into Brodsky’s fiery vocal barks, which are a hoarse, scratching bark of loathsome spite, backed by juicy, blood-running slabs of shredding metallic hate. We reach a miasma of math-rock conjuring on the riff-fountain that is Deadlock; rapid-fire guitar jams are sandwiched alongside Brodsky’s ever-changing vocal croons of high-pitched wails to paint-stripping barks of indignation; not to mention Cagaeo’s bass thumps and Koller’s bludgeoning stick-work. Closing track, Bleeder – clocks in at just under 6 minutes and whilst it sacrifices speed, it more than makes up for it in intensity – this sombre, prog-metal shift stands out amongst the bombastic thrash that’s drunkenly vomited everywhere beforehand. It’s a moody, contemplative piece that really shows off Brodsky’s superb vocal range and feels right at home with his more experimental main project, Cave In than anything else on this record.

Remember that spine-tingling feeling the first Kvelertak album gave you? The way you wanted to hug someone and jump around inside it’s sweaty embrace? Bleeder takes a lot of those elements, tightens them and blasts them back out into your face with even more positive and raucous delight than your brain can possibly comprehend. Perfectly executed, Mutoid Man pour blood, sweat (bucket loads of the stuff) and furious, warped, turbulent energy into this masterpiece. Jaw-dropping in every single way, this is one of, if not, the best metal album I’ve heard all year and you need it in your ears.