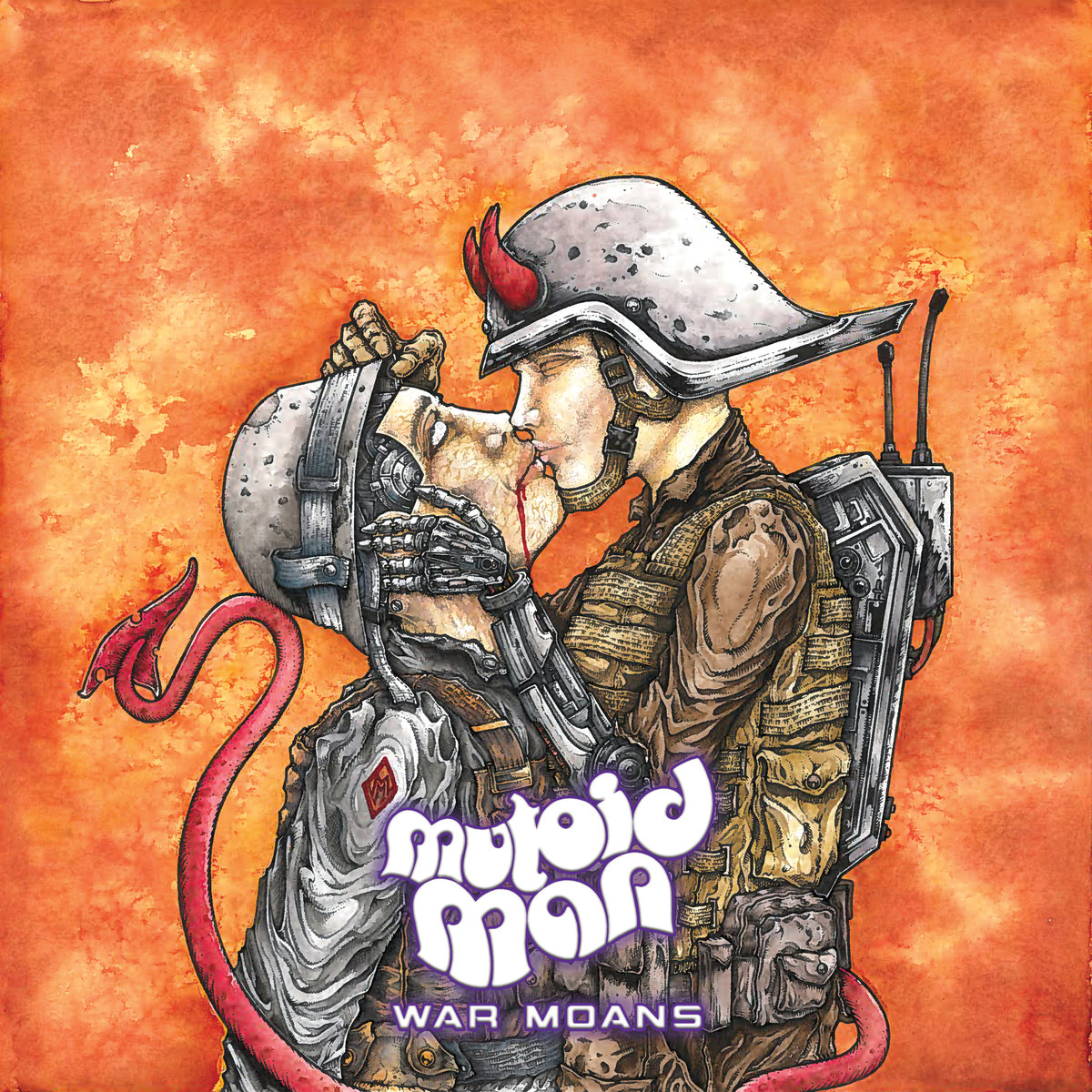 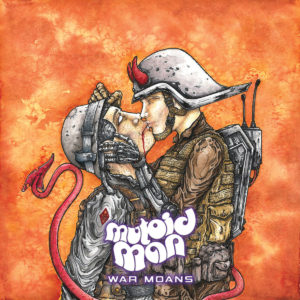 I’m not surprised to hear that Mutoid Man brew their own beer; 6.66% apparently. It’s the logical beverage to accompany anything surrounding them and their music -a bottle really should have been included with a copy of their second album. Firstly, there’s no fucking way Mutoid Man have mellowed in the slightest. The band and this album is still an unstoppable headrush (in fact, that’s the name of track 6 on War Moans) and is just as relentlessly daft/fun/air-guitar-worthy as Bleeder and their debut EP, Helium Head.

Opening track Melt Your Mind couldn’t be more aptly titled – it’s a shred of riotous, unhinged energy that bubbles, bursts and roars. In just over 2 minutes, it’s slams home a vibrant blast of melodic metallic punk leaving your jaw on the floor. This is swiftly followed by the drum-happy clatter of Bone Chain, which sounds like Van Halen writing a pop song for Kvelertak. The beats on this are heavy as hell and it’s the kind of track that should be featured (if they did another one) on the next Far Cry Blood Dragon and there are definitely moments on this where you can hear sci-fi bleeps, the sound of rayguns firing and whooping laughter – cracking stuff. The roaring chaos-punk of Micro Aggression is an unstoppable assault; Nick Cagaeo’s bass gurgles and rumbles like a demon clearing its raspy throat, whilst stickman Ben Koller becomes more machine than man pounding out a taunt and sweat-inducing rhythm. Credit to frontman Stephen Brodsky, who switches from cocky, declarations of love, to wailing Rob Halford-esque shrieks, to roaring metalcore fury during this punishing wave of scything thrashcore.

Brodsky’s cackling laughter emerges again midway through lead single, Kiss Of Death, which, firmly cements how ridiculous and brilliant Mutoid Man are. On a track that is so down-tuned, with blister-inducing power it still manages to sound faintly like some kind of fuzz-metal ballad, with tongue planted firmly in cheek. Koller is once again, utterly crushing it behind his kit; whilst the dirty-bass rumble of Cageao trawls that lake for the sickest grunge-heavy riffs it can find.

In a nod to Brodsky’s ‘other’ band, the aptly named Headrush is the space-rock pop song (“Feelin’ anti-gravity“) you’ve waited your whole life for and it hammers home, with gleeful delight. Riffs and chords splatter everywhere, like a detached helmet on an unfortunate astronaut and cork-screw-guitar rolls, kaleidoscopic backing keys and just fucking relentless power. This just churns and boils with delirious energy, gusto and guitar-smashing abandon. Things get even weirder when Brodsky romances the daughter of Satan on the sultry and no-holes-barred Date With The Devil, complete with off-kilter riffage, squealing harmonics and lyrics about fathering an unholy abomination in full and graphic detail.

The cheesy-guitar thrash-medley on the opening bars of Irons In The Fire is pure Kvelertak worship – and while this isn’t a bad thing, it’s enough to make me immediately reach for a copy of Nattesferd. I mean, you can practically see Brodsky and Cageao flailing their arms like fucking metal windmills on every down-stroke, (possibly taking breathers to flip each other off). This a frantic, almost Locust-esque spazz-rock freakout of serrated and cutting licks, prog-metal meanderings and large ham extravagance. If Mutoid Man can overact, they’ll eat not only the scenery, but the entire stage in one gulp.

The opening salvo of noise on Wreck and Survive is disconcertingly jarring and wrought, bludgeoning the listener for 20 seconds or so, before switching to an almost melodic, shoegaze-vibe that is then obliterated by the wretched, squealing guitar tone, that hisses and spits venom with caustic, see-sawing spite. Label buddy Chelsea Wolfe provides some suitably creepy and ethereal backing vocals during the song’s scrambled and frenzied coda, sounding lost and deeply haunting during the metallic storm. The clumsy and chaotic Afterlife is totally ridiculous balls out, thrash-core stupidity on crossing over to the other plane of existence; littered with Dillinger-style time changes, oddball pacing and Brodsky’s schizofrenic vocal yelps from rasping punk rock, to smooth classic rock, back to deathcore screams.

It’s somewhat of a relief that Bandages is what it is – from the exhaustive battering and onslaught of the 11 previous tracks, this allows you to gulp frantically for that air that’s been expelled so rapidly. It’s also a terrific album closer; huge, foot-on-monitors, slow-shredding from Brodsky and Cageao; with a delightfully optimistic prog-rock mix thrown in. The squealing, Maiden-esque guitar solo during the songs final minute is utterly wonderful/silly/joyous, whilst Chelsea Wolfe once again, lends her exemplary vocal talents, with haunting and dulcet serenity. In the words of Keanu Reeves, “Woah.”

Even if you don’t really “get” metal, there’s no way you can not feel a grin spreading across your face when listening to Mutoid Man and War Moans. This is a trip into a mind that has definitely been melted; it’s furious, wild and roaring with infectious technical energy. War Moans will make you want to air-punch to the heavens, sweep someone off their feet into an embracing hug and feel life surging through your veins.

You can stream/purchase/have a date with the devil (and Mutoid Man) below.