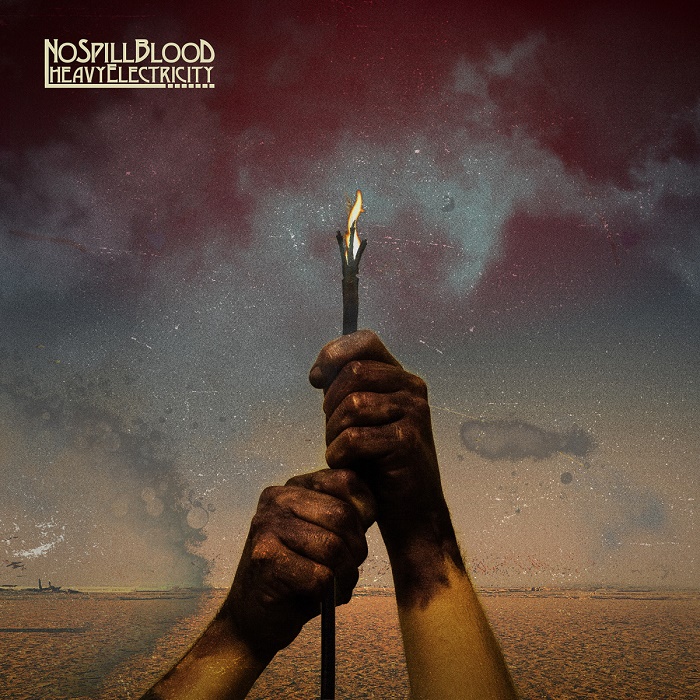 “If heavy electricity falls from these headphones, not only would it blow my head off, it would cut me completely in half.”

Pure horror can take many forms and while some might think a visual mode is the most striking channel, you can’t go wrong with total audible dread to make someone lose their breakfast and run screaming, hands clamped tightly over their ears as the rolling, churning abhorrence rushes to consume them. Which brings me to No Spill Blood. The horror film hasn’t been made that Heavy Electricity could soundtrack, but it’s only a matter of time, as this, their first full-length, is truly the stuff of nightmares. Much like how Disasterpeace‘s superb It Follows soundtrack set up a shop catering in minimalistic, bone-chilling terror inside your subconscious, Heavy Electricity is a thundering juggernaut of complex and blood-curdling arrangements that have managed to evolve into evil-incarnate compositions.

The sludge-bass attack of opening track White Out, is a punishing wave of foaming, bilious rage that evolves through a menacing synth-drenched journey of harrowing discovery. When bassist and vocalist Matt Hedigan isn’t growling through his distorted microphone, White Out thunders along a mind-bending, prog-metal twist of warped delight, expertly twisting through the passages of electronic wizardry by synth-man Ruadhan O’Meara, whilst drummer Lar Kaye (previously of Adebisi Shank and now of All Tvvins) provides the resonant, marching beat holding it all together.

The science fiction shriek of Back To The Earth dreams up a spiralling, Mike Oldfield-inspired voyage into the nether. It sounds like Red Fang have gone along for the ride, having swapped their guitars for synthesisers, but are still holding on to their beer. Hedigan’s vocals have a hollow, cavernous tone and his bitter, reverberating cry is caustic and somewhat hammy in its execution.

There’s space to breathe in the opening minute and half of Now II, which floods past in its church-organ-sounding glory. The rich warmth on display sets it apart from the cold and alienating barrage of White Out and Back To The Earth. It hits an intense and warped wall past the three minute mark, exploding into a howling storm of noise-psychedelic and a hefty, mind-bending coda. Whatever hallucinogen’s No Spill Blood are using, please share. The tension is kept at maximum levels, as you’re hit full in the face by the hardcore techno-punk rock of El Duurto. This is a brutal Nine Inch Nails slam-dance of lip-curled fury, driven by Kaye’s relentless and furious drumming, which is an unstoppable onslaught. Harsh Route on the other hand, runs at a slower tempo; the groove is firmly routed in 70’s psych and stoner-rock highs and some moments of Rush-inspired prog-weirdness.

A strong John Carpenter-streak runs through the malevolent title track, which also draws some similarities to Title from Disasterpeace’s It Follows. This will chill you to the very bone – the icy tendrils of fear, the weeping keyboard flourishes, the drip-drip sound that is hopefully not blood. The fact it starts to meld into an gritty 80’s cop-theme tune halfway through, Kaye’s sledgehammer-drum beats hit home and Hedigan’s low-end bass thunder drags out an eerie and distressing dirge.

The aggressive barrage that is Sweet Beans, sounds like a computer suffering some corrupt meltdown – with O’Meara casting out spellbinding and intoxicating levels of fractured and chaotic synth-wave (seriously, the last 2 minutes of this are an utter mega-mind-melt) whilst Hedigan barely keeps it together, uttering disgruntled and savage barks of seething hostility. The flamboyant and bombastic Endless Drift closes Heavy Electricity, acting as the musical-brother to the album’s title track, it’s a lot more pompous and operatic, opting to show off a strong, kaleidoscope of post-metal theatrics rather than creep around the edges, hissing and snarling.

There’s no cage that contain No Spill Blood – they’ve dissolved it with their acidic and warped reality-bending soundscapes. Heavy Electricity is a remarkable body of work; the production is absolutely huge, giving full weight and volume to the bass, keys and drums, leaving nothing hidden. It’s a furious mood-whiplash of sinister deviance, from the sludge-metal opening salvo of White Out to the space-madness of Now II, to the soul-reaping bloodshed of the title track – incredible and intimidating in equal measure.