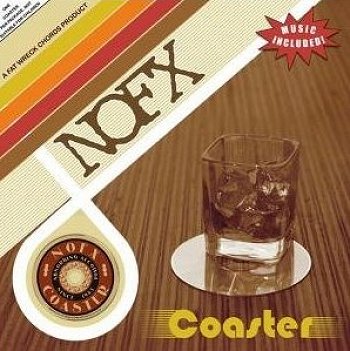 If youâ€™re not a punk fan (get out now) youâ€™ve got to admire NOFX. Theyâ€™ve been going for just over 25 years now, with no signs of stopping (despite all 4 band members being in their early 40s) and on their 11th full-length release ‘Coasterâ€™ they still sound as determined and snotty as ever. After finally seeing George Dubya Bush topple as their President, I was concerned as to what Fat Mike, Smelly, El Hefe and Eric would write about now their number one song-protagonist had left the limelight. But it seems that without the man who brought us the immortal words: â€œI believe human beings and fish can co-exist peacefullyâ€Â in charge of the most powerful country in the world, NOFX can go back to writing songs about floor covering, defenceless shellfish, lesbians and drinking heavily. Thank the lord I say. Not that I minded the Bush train of negativity, but it was the kind of bandwagon that so many acts jumped on, that it diluted the real message that those before had already made. It was like a new beer company appearing and everyone loving, only for smaller, inferior breweries to pop up with weaker imitations that tried to do it justice, but never sat right in the ownersâ€™ glass or indeed as they were pouring it down their gullet.

Time has been good to NOFX. Now in their more adult years, they still haven’t matured, but their playing ability has increased tenfold. I mean, their sound has always been characterised by other-the-top guitar solos, Fat Mike’s grimey, out-of-tune bass rumbling and their frantic drum patterns but on ‘Coaster‘ they’ve *insert poor analogy referring to an outstanding achievement.* Put it this way, you know how Less Than Jake released ‘GNV FLA‘ last year and I said it was their best work to date? That’s how I feel about ‘Coaster.’

Alec Baldwin assures us how weak we are (it’s not the “fuckin’ leads“) at the start of ‘We Call It Americaâ€™; in a quote from real estate ultra-swear-o-thon, Glengarry Glen Ross, which appears, alongside the songs lyrical output, a direct representation of the current financial climate in the United States. America, it seemsâ€Â¦is ‘weakâ€™ â€â€œ as regards funds and the lines “national bankruptcy, circumcised societyâ€Â¦poor is the new rich” seems to state that the populous that was once minted, is now scrabbling for wealth. Despite this somewhat, negative outlook (or you could say current awareness), ‘We Call It Americaâ€™ is a progressively upbeat track, featuring the trademark ‘woaaahhhooohhsâ€™ and the solid punk rock stability that weâ€™ve come to associate with the San Francisco fatsters.

For me, the two best tracks sit next to each other slap bang in the middle of this convenient drink stand shaped like a music disc. ‘Creeping Out Saraâ€™ tells a supposed fictional account of Fat Mike meeting Sara Quin of the Canadian band, Tegan and Sara at a NOFX show. Set to mid-paced, synthesised pop-rock, the lyrics mostly consist of Mike basically freaking Sara out with enquiring questions about KD Lang, scoring drugs, lesbianism with her sister (â€œwhere they both gang up on one girlâ€Â) and the movie Bound (â€œdid they like Jennifer Tilly?â€Â) Itâ€™s really a PG-13 rating song as opposed to ‘Louiseâ€™ from ‘Pump Up The Valuumâ€™, which is the kind of song you rush nervously to skip every time a member of the family walks into the room. Itâ€™s made all the more entertaining by Mikeâ€™s bemused questioning and confusion over the issue of scaring Sara (â€œor maybe it was Tegan?â€Â) as if he canâ€™t believe itâ€™s him causing such problems. Still keeping with the theme of same-sex couplings, ‘Eddie, Bruce and Paulâ€™ tells the story of Iron Maiden as a gay-love triangle in just under four minutes. It’s basically about how original Maiden vocalist Paul Di’Anno was booted out the band (“Eddie had it good, but Paul loved his cocaine, and Eddie hated punks – so, after a couple years, Eddie broke it off with Paul, to look for a new man“) in favour of Bruce Dickinson (“searching for a beau, who sings in falsetto“). This is where the NOFX sound jumps from pretty great to â€œoh my sweet Jesus get my air guitar down from the rack I have some serious playing to do.â€Â Guitarists El Hefe and Eric Melvin rip into the most extravagantly exaggerated guitar solos, each trying to out do the other with the ridiculousness of their playing ability.Ã‚Â  You can see why El Hefe is named ‘The Boss’ and why Melvin has been with the band since its inception in 1984. Phenomenal playing ability from 2 extremely talented individuals on a song that has more in common with hair metal, cock-rock swaggeryÃ‚Â than NOFXâ€™s belligerent skate punk.

The smooth-lounge jazz opening of ‘I Am An Alcoholicâ€™ flows like a fine malt whisky into a crystal glass, with El Hefeâ€™s trumpet skills gliding effortlessly over an intro that could be mistaken for a Richard Cheese number. Fat Mikeâ€™s scratchy, yet trying-to-be-dulcet tone carries the track nicely, before the drums kick in, transforming the song into the traditional punk rock bounce, before diving head first back into the realms of dark rooms, improvisation and men who wear sunglasses inside. Iâ€™m unsure as to whether the line â€œI canâ€™t because Iâ€™m a drug abusing alcoholicâ€Â, is tongue in cheek or not, as I was under the impression Fat Mike had kicked the marching powder into touch, but still enjoyed the odd brewski. It does seem to come from the perspective of someone starting later in life than they feel they perhaps should have (â€œI didnâ€™t try pot until I was 21â€Â¦â€Â) and spiralling into a steady decline of getting completely wasted, but with that nagging feeling of remorse every time the chorus kicks back in. They know they shouldnâ€™t be getting intoxicated all the time, but it seems the best time to do it, so why not go for broke? ‘The Quitterâ€™ is a somewhat mocking and barbed sounding piece, criticising someone for kicking alcohol and to a lesser extent, narcotics. Even the guitars sound contemptuous and echo this spiteful, shrill tone giving the track a dark, sinister edge.

In contrast to these tales of heavy drinking and wild hedonism, ‘My Orphan Yearâ€™ is a touching, melodic piece of punk rock that details Fat Mike losing both his parents in 2006; his dad to dementia and his mum to cancer. Whilst the vocal delivery is unusually brash for a track that touches on such poignant memories, the lyrical content is particularly delicate (â€œso he died without a sonâ€Â; â€œthe night she left me I drank scotch all night and thanked her for everything sheâ€™d doneâ€Â) and is probably the best song NOFX have ever written. Whether Iâ€™m imagining it or not, but I swear on the first time round when Mike sings â€œ2006, goodbye parentsâ€Â, you can hear the big guy choking back a tear; the slight quiver in his vocals are a partial gateway into how much this song means to him.

If the opening riff to ‘Blasphemy (The Victimless Crime)â€™, which is ripped directly from The Banglesâ€™ ‘Walk Like An Egyptianâ€™ doesnâ€™tâ€™ make you smile, then the un-PC lines that encourage having sex with nuns should do the trick. The inclusion of the rapid piano tapping to this religion bashing piece is something that I would have liked more of on ‘Coasterâ€™ but moderation is something we all have to live with I guess. The tantalising bass line on ‘Suits and Laddersâ€™ leads to a vocal-back-and-forth between Mike and Melvin regarding the downfall of yuppie wankers, spiralling into alcoholism and pissing themselves. The lyrics ‘you are a superfluous manâ€™ point towards the subject becoming essentially redundant and unwanted. On ‘The Agony of Victoryâ€™ (which is a cover song and destined to appear on a forthcoming soundtrackâ€Â¦) those downtrodden minions of society are encouraged to â€œdance like a retardâ€Â and that â€œlife is an endless party, not a punch cardâ€Â giving the impression that this is possibly a lost Andrew W.K. song? But seriously, whoever this song originally belonged to, NOFX have injected their usual brand of offbeat, cheeky humour into a vibrant and exhilarating track.

I could go on, but thereâ€™s a limit to how much twaddle I should write here. However, my final words; ‘Coasterâ€™ is NOFXâ€™s finest collection of songs to date and is possibly my punk rock record of the year – stunning both lyrically and musically, it doesnâ€™t get much better than this, essential listening to those who appreciate three chords, songs about drinking and retard dancing.
–