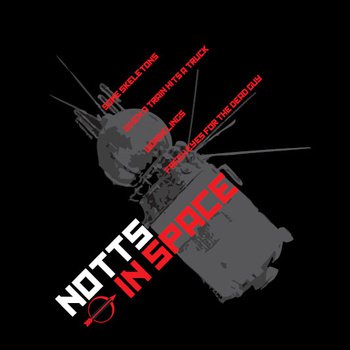 Bands – Some Skeletons, When A Train Hits A Truck, Worselings, Fresh Eyes For The Dead Guy
Release – Notts In Space EP
Label – None, self-released
Date – Now! Available from the Notts In Space bandcamp via download or CD.
Sounds like – One small step for man,Â several giant riffs for rock kind.

Back in April, a group of like-minded individuals decided to host a â€˜launchâ€™ party in Nottingham at the Chameleon Arts CafÃ© to promote all things â€˜Spaceâ€™-themed (so as you can imagine, â€˜Neighbourhoodâ€™, â€˜Female of the Speciesâ€™ and that other song that Liverpudlian band released were featured heavily) The reason? To celebrate 50 years of man in space. They even roped in Steven Hawking for this trailer for fucks sake. Now, thatâ€™s commitment â€“ what have you done lately, huh? Bet you havenâ€™t run a successful Space-themed party and put out a split EP featuring 4 local bands, all contributing new tracks themed around the magic ofâ€¦.SPACE.

Also, the title of the event; â€˜The Difference Between Me and Yuri is I’m Notts In Spaceâ€™ â€“ absolute genius.

Thereâ€™s a rich warmness about Some Skeletons â€“ their sound is a wonderfully crisp roar of crashing guitars and scattered drum rolls. Thereâ€™s an early 90s emo vibe about â€˜Authorâ€™ without it being too stressed and whiny. Instead, itâ€™s incredibly thoughtful, with a heavy, Mineral-style blast of intensity at the start and the last 40 seconds of AmplifierÂ space rock breakdown. Based around the lifecycle of the sun, â€˜Authorâ€™ finds great strength, not just only in itâ€™s noisy, alternative rock but also in the overlapping vocal melodies and jangling, somewhat scuzzy guitar lines. Thereâ€™s a touch of Small Brown Bike in their delivery, as well as a keen earnest nature in the vocals, which at times sound quite fragile, but somehow work nicely with the swooping rush of their post-hardcore riffs. I just wish I could fully understand what the last few lines actually say at the end of the track; which reads something like:

â€œWith the power to crush all remnants of my birth all through and into the earthâ€ â€“ which states quite clearly, how much some of us probably underestimate the power of the sun.

Thereâ€™s a great sense of childhood innocence and nostalgia woven into â€˜Making Spaceshipsâ€™ by three-piece, When A Train Hits A Truck. The song is essentially about constructing lego spaceships, the trials and tribulations of following the sometimes less than helpful instructions and the nature of creating something to wave around your head and make â€œpow pow!â€ noises with. Musically, itâ€™s a pop-punk bounce of energized rock that utilizes a good mix of overlapping dual vocal shouts, scuzzy, yet sturdy basslines and a slightly sardonic view on both vocalistsâ€™ abilities in constructing a battle cruiser out of building blocks. Kudos to WATHAT for writing a deeply infectious chorus; the soaring â€œwe will fly through bedrooms skiesâ€¦.toâ€¦god knows where!â€ is one refrain you will have trouble removing from your brain.

Worselings sound like theyâ€™re trying to remove something nasty from the soles of their shoes. Not only is there a sneer in the delivery of their acid-tongued vocalist, but also in their music, which is fairly jagged and intense. Itâ€™s a stabbing, spiky rattle of disenchanted and quite stark sounding heavy rock. Their track, â€˜Lost Cosmonautâ€™ is spat at the listener rather than sung, especially on the chorus, where the track title, is spluttered out through a strangled half-scream of disgust. It even starts off annoyed â€“ â€œdonâ€™t think youâ€™re something special, donâ€™t think you are the firstâ€¦you were just the lucky oneâ€¦.â€ with Worselings doing their best Falco impression of comic revulsion. The track is apparently based on the many unsuccessful fatal launch attempts that preceded Yuri Gagarinâ€™s trip into space. Dense, Therapy? Meets Future of the Left metallic punk and possibly my favourite track on this EP.

Apparently, the handclaps were the hardest part on â€˜When Gravity Goesâ€™ by Fresh Eyes For the Dead Guy. Similar to Worselings, Fresh Eyes, sound increasingly bitter, with their music assaulting the listener in a much crisper, but still equally sharper manner. Kindred spirits â€“ thereâ€™s some nice Drive Like Jehu elements present; it weaves and contorts with similar urgency to Frobergâ€™s band of post-punk legends and the vocals are barked with that familiar spite and delirious fever. The structure of quiet/loud builds, not to mention the scrappy, noise breakdown halfway through is reminiscent of These Arms Are Snakes, especially the cry of â€œUNITS OF DISTANCE, UNITS OF TIME!â€ Jagged, determined and frightfully chaotic punk that scythes and roars with malevolent gusto.

You can buy ‘Notts In Space’ from the bandcamp site here. Also, check out the Some Skeletons ‘Kypes | Pests | Throats’
Â EP, When A Train Hits A Truck’s ‘Special Dice’ EP, ‘The Angry Hum’ by Worselings and ‘Triceratops‘ by Fresh Eyes For The Dead Guy.

WhenÂ A Train Hits A Truck

Fresh Eyes For The Dead Guy