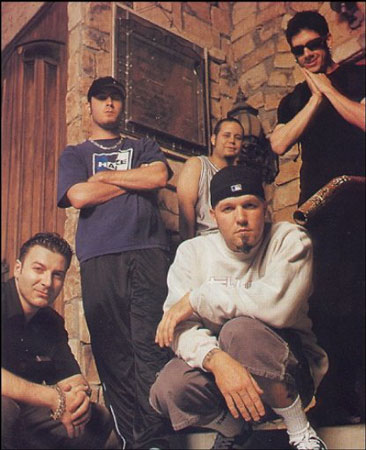 Back in the day (mid-1990s, early 2000) nu-metal was big – Pavarotti big. Nearly every music channel had some sweaty bald man in a black t-shirt jumping up and down, screaming about how he was beaten by his dad with a tyre iron. Behind him would be 3 â€â€œ4 other guys (all of similar appearance, save for ridiculous facial hair) trying to mash together their varied styles of five-string slap bass, two note power chords and jazz drumming. Atrocious, right? Yeah, but at the time it was one bandwagon that I duly jumped on and enjoyed. Of course, I would deny all knowledge of owning the first Papa Roach album when talking about the new La Quiete 7â€Â with my peers down the local straightedge clubâ€Â¦.

This somewhat embarrassing new feature will briefly (and god to I mean briefly,) skim over 10 or so nu-metal acts from the past (chosen by Jason and myself) for you to cringe over. Angst-ridden rock has never sounded so good.

You’ll notice we’ve only included a few acts, as some are really too appalling to mention.

Band: Papa Roach
Time Active: 1993 – Present (they self-released a lot of early material on eps.)
Sound: The ‘Roach have moved away from their rap-core metal tag (as seen on ‘Infestâ€™ ) and now sound more ‘hard rockâ€™ apparently. I.e. a watered down version of Eighteen Visions.
High Points: ‘Infest‘ going Platinum 3 times. Woah. Also, ‘Last Resortâ€™ reaching number 3 in the singles chart in the UK.
Low Points: That ‘lovehatetragedyâ€™ album. *Vomits* Plus, looking like world class douchebags.
Fast Fact: In an early incarnation of the band they had a trombone player.
Where are they now?: Still going strongâ€ if thatâ€™s the word. New album released in August, called ‘Metamorphosis.â€™ Drummer Tony Palamero has left the band due to personal reasons. Band: One Minute Silence
Time Active: 1995-2003
Sound: Formulaic but anarchistic rap-metal that progressed into a harsher, more desolate sounding territories before their split. ‘Fish Out Of Waterâ€™ was a particular favourite, despite the nonsensical lyrics and comedic singing.
High Points: Extensive touring schedules, including: support for metal-gods Anthrax on one of their US tours and a European one, as well asÃ‚Â dates with Machine Head, Slipknot and Sepultura.
Low Points: Hard to say â€â€œ they were a hard working band, but their music offered little experimentation. Perhaps the hectic touring was too much? Also, would they still be relevant nowadays, what with the progression of British metal (i.e. Johnny Truant, Down I Go, Maths, Throats, Rolo Tomassi, etc.)
Fast Fact: The bandâ€™s name comes from showing a mark of respect when someone close to you/important/respected dies.
Where are they now?: Vocalist Brian ‘Yapâ€™ Barry formed Pink Punk (spoken word/hip-hop project, quite good) in 2006 and released an album called ‘Zoo Politicsâ€™ on Freeport Records. Although OMS havenâ€™t ruled out the idea of reforming, it seems unlikely.

Band: Spineshank
Time Active: 1996 – 2007 (reformed September 2008)
Sound: Their distinct nu-metal sound was complimented by erratic industrial beats, especially on ‘The Height of Callousness.â€™ Vocalist Jonny Santos maintained a husky drawl to his voice throughout their recordings that was certainly an acquired taste. He constantly sounded like he needed Imodium tablets/or a packet of tunes.
High Points: Making it big with their second album, ‘The Height of Callousnessâ€™ and their breakthrough singles ‘Syntheticâ€™ and ‘New Disease.â€™ Plus, joining Ozzfest in 2001, tours with Disturbed and Hed (PE) and being nominated for a Grammy for ‘best metal performanceâ€™ in 2004 for their track ‘Smothered.â€™
Low Points: Losing Santos really. At the height of their career his departure led to the end of Spineshank. Mind you, I’d have kicked him out for that ridiculous haircut.
Fast Fact: TV host Daisy Donovan actually went on tour with Spineshank in 2002 as part of her ‘Daisy Daisy‘ show, (a crap version of Louis Theroux.)
Where are they now?: Santos plays guitar and sings in rubbish metalcore act Silent Civilian. The 3 remaining members of Spineshank continued for a bit with a new vocalist, but amicably split after 3 years of not much happening. A sad end really. (UPDATE = according to wiki and myspace, Santos has re-joined Spineshank and they’ve begun recording a new album! Hit up their myspace to hear an exclusive track!)

Band: Disturbed
Time Active: 1996-present
Sound: If you were to look nu-metal up in the dictionary, a picture of Disturbed would probably be under the entry. Their style is typical of the genre, albeit with vocalist David Draimanâ€™s trademark ‘monkey yelpsâ€™ and unusual singing style on their earlier material. Nowadays, they seem to go under the ‘alternative metal’ tag.
High Points: The release of their first album ‘The Sicknessâ€™ sold 4 million copies and projected them into the metal circuit, making them a staple band of the genre. Theyâ€™ve also had 3 consecutive number 1 albums, which I find incredibly hard to believe. I guess people like derivative American meathead metal!
Low Points: losing bassist Fuzz due to personal differences in 2003, but apart from this the band seems to be going from strength to strength.
Fast Fact: Their most well known song ‘Down With The Sicknessâ€™ was covered by Richard Cheese and used in the film ‘Dawn of the Deadâ€™ (2004 version.)
Where Are They Now?: Disturbed have just released their 4th album, ‘Indestructibleâ€™ (best album cover ever alert) and are currently planning a tour of Australia in August and September with God-botherers P.O.D. and lamest band ever, Alter Bridge. Exciting times. Sound: Idiotic frat boy rap-rock, featuring over-the-top profanity, abysmal lyrics and some neatÃ‚Â scratching courtesy of DJÃ‚Â Lethal.
High Points: Selling 54 million albums worldwide is nothing to be sniffed at and ‘Significant Other‘ their sophmore effort, went number 1 in the Billboard 200. Also, that free gig they did in 2003 at Finsbury Park was a nice gesture.
Low Points: Too many to mention. How about: losing Wes Borland twice, that shitty remix album, Results May Vary, The Unquestionable Truth, the Britney Spears thing, Durst being heckled at the 2003 Summer Sanitarium Tour and walking off stage after 6 songs, being generally a walking joke,Ã‚Â etc.
Fast Fact: For Christmas several years ago, I was given a censored version of ‘Chocolate Starfish….‘ by my Auntie. Needless to say, it was actually funnier/better than the original uncensored version – hearingÃ‚Â ‘Hot Dog’ with all the ‘fucks’ blanked outÃ‚Â was particularly amusing.Ã‚Â The album has since vanished.
Where Are They Now?: Hiatus. Apparently Durst and co. are supposedly working on the follow up to ‘The Unquestionable Truth’ but if I was them, I wouldn’t bother (although the ‘Home Sweet Home/Bittersweet Symphony’ cover they did was actually ok.)Ã‚Â Borland is currently working on his Black Light Burns project, having severed all ties with Limp Bizkit, calling the ‘Greastest Hitz’ album they released back in 2006 ‘a pile of shit.’ Personally, I’m hoping forÃ‚Â a second Big Dumb Face album.