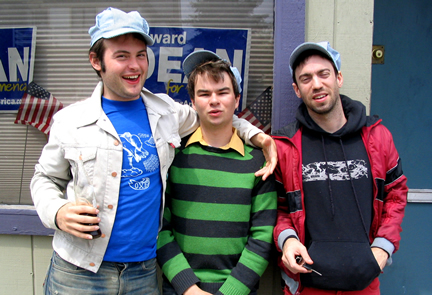 A question for you. How much noise do you reckon you could make with two wireless guitars, and a drumkit?

a) A bit I guess.
b) I’d shred that shit up; I’m like Hendrix on the guitar, man.
c) Not really my thing. Got any tasty beats and a moog?
d) I’d destroy you with my over-the-top math-rock tendencies, instrumental-danceable beats and bludgeoning sound.
e) Never mind that, it’s your round.

If you answered d) congratulations! You must be one of the members of Baltimore’s finest: Oxes. (Or if not, you’re probably a big fan, like.) Oxes are a three piece instrumental rock band from Baltimore and are part of the city’s so called “Rowdy Rock Collective’ (no, me neither) who are apparently a group that engages in various stunts and bouts of tomfoolery; aka making tons of noise in public and generally aggravating/intimating people (in the nicest possible way of course!)

On record, the band is a noisy collaboration of math rock and grinding technical guitar-showmanship. Their sound is quite remarkable; veering from off-kilter riffage and wildly out-of-control drumming, to a sombre low-end melodic drawl and explosive patterns of colour. Or something to that effect.

Tracks such as the rollercoaster ride that is ‘Kaz Hayashi 01‘ with it’s near-tribal drumwork and epic build up and discordant collapse halfway (cue the sound of glass being smashed and other acts of petty vandalism.) Just when you think it’s all over, that monster riff kicks back in again, effectively cancelling out this sudden break in the music. Also, the track ‘Afri-Cola‘ (from the 2005 ‘Oxes Ep’) exemplifies Oxes’s creativity, sounding more like a Trans Am track; a heady rush of space-rock fuzz and acidic riffs.

Live; they appear both intriguing and intimidating. Both guitarists stand on huge black boxes, towering over the audience and favour the use of wireless guitars, giving them free reign of any venue and the perfect opportunity to “get up close’ with members of the audience. Yikes.

Unsure: last EP was released in 2005. In 2006 they went to war with Old Navy involving copyright infringement (more details here). Rumours of UK tour are unconfirmed and could be bull plop.

Oxes music can be purchased from either Monitor Records Online store or from Amazon.