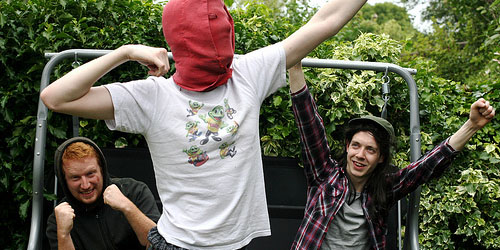 I only got to see them twice live and both times were mesmerising. The first, being in a tiny cellar in a pub called Cross Kings alongside former label mates BATS and the terrific Down I Go. I hadn’t heard a note of the ‘Shank’s music until that night and they blew my tiny fragile mind apart with their vicious Battles-meets-OXES dance-party chaos. I had to experience more of this band – I bought their EP that night and listened to it constantly, reviewed it for this here website and the band got in touch, sending me their debut, This Is The First Album Of A Band Called Adebisi Shank. The second time I saw them was with Blakfish (RIP) and Shield Your Eyes. Again, they were nothing short of incendiary live and worth missing my last train to see.

You have no idea how much I’m regretting not going to those shows at Birthdays now – you cannot begin to imagine.

What next then? Well, guitarist Lar is working with Conor from The Cast Of Cheers on a new project called All Tvvins, bassist Vinny is making video game music, producing, mixing and working with Rupert from BATS on a new band called Speed Of Snakes, whilst drummer Mick is training for a career in UFC?

Anyway, raise a glass to Adebisi Shank – a band responsible for some of the most incredible, unique and genre-smashing sounds ever created. Also, please enjoy 10 of my favourite choice cuts from their back catalogue. Trio. Always. Oyasumi, guys.

This near five minute instrumental barrage shifts through swirling passages of hungry, pounding math-rock that contorts, shifts and writhes in angular, squealing delight.

A gnashing hunger of overlapping riffs, vocoder bleating and squealing, discord rush forth on the opening track to their first album, concluding with a heart-racing pummel of At The Drive-In-style zealous energy.

Trippy, to the point of falling down the stairs – chopped up club beats are sandwiched within a scrawling, stack of overlapping chords and furiously frantic math-punk rage.

Breakneck, instrumental punk rock thumping past in 2 minutes and 30-something seconds – experimentation is tagged-out and replaced with frothing riffs, lurching guitar chords, creaking wails of feedback and handclaps. Have a cold shower after this one.

Masa is the sound of two armies meeting on the battlefield, hungry for blood, smashing weapons against shields, grinding their teeth. Then a giant multi-armed robot appears and fries both sides with a guitar that shoots scything passages of incandescent light. Also, that bass hook – holy shit!

Okay, so this fell off the Super Mario soundtrack right? Relentless summery, electro-glitching beats and pop-rock bounce sound like our plumber friend bombing through the special zone in flying raccoon mode, shredding Koopa Troopas in his path.

A bizarre, jazz-rock, electro-mega melt of dancing robots and Star Wars cantina band weirdness – Mazel Tov is barking mad for all the right reasons. It teases you by being both cheesy, deliriously happy and mimics the closing credits to a 90s American sitcom perfectly.

Future. Music. This is Rainbow Road becoming self aware. This is Skynet reshaping itself into a complex musical instrument. This is pulsating, pure, unrelenting energy given a voice and everyone needs to hear it.

The ecstatic, orgasmic triumph that explodes forth from Voodoo Vision is staggering – even the quiet, solemn piano interlude is champing at the bit to erupt into the techno-coloured breakdown of vibrant, spasmodic glory.