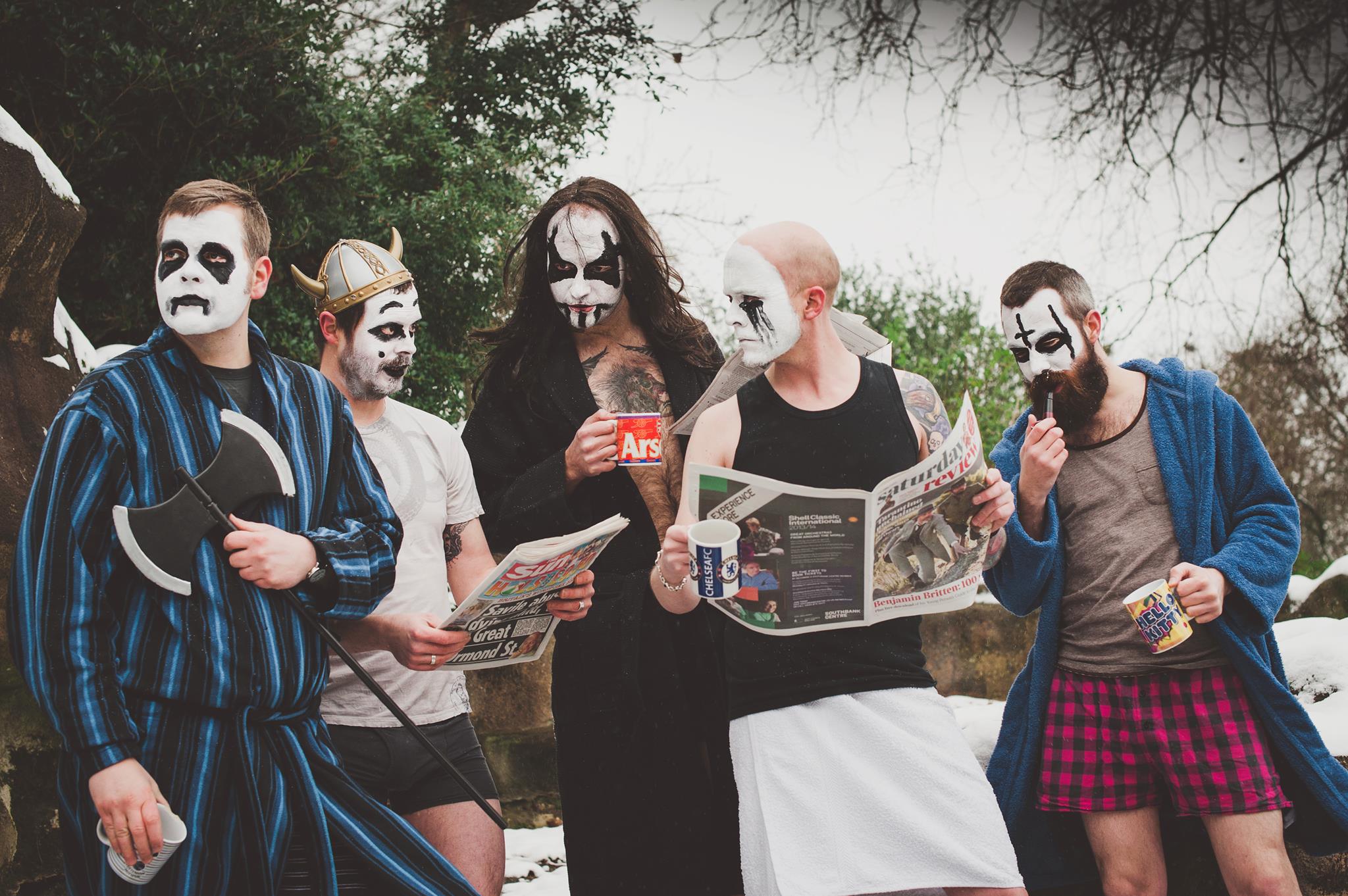 Palehorse are fuckin’ dead. Although nowadays, splitting up is akin to going on a long trip somewhere, only to return 18 years later with a beard and a new hairstyle, still rocking the same moves (hi Refused!) But what of Palehorse? 16 years doing this shit, few line up changes, several albums down the line, sometimes it’s just the time to bow out and let someone else take the reigns. Leave a good corpse though, right? Looking Wet In Public is their fifth album, stretched over 38 minutes and 6 tracks and will make you wonder if you were being stalked on your way home tonight. If that shadow in the corner is just a shadow and not….well, I’m not going to say man, more…an idea of someone, holding what could be considered some kind of cutting implement.

It’s interesting that this whole album sounds like a shift into a dimension that will still scar and betray the mind, years and years after (if you do) eventually escape. The collective horror that rises from the deep that all five members of Palehorse create, shape and form into the vision of mouth-frothing danger and evil is one hell of a journey. Opening track, Half Lizard/Half Lizard lurches from the ooze, driven by vocalist Nikolai; his screeching, cacophony of a voice is a flinch-inducing roar, whilst the dual bass attack and thundering drums are a stagnant and bludgeoning attack. All the while, alienating and shudder-inducing noises plague this track, as noise-maker and co-vocalist Mark Dicker gets in on the action – his grotesque, phlegm of a voice working in disgusting combination with Nikolai’s unique screech. This must take top song title of the year, right? Sorry Future of the Left, but Miserable Heroin Addict Vs Jehovah’s Witness Guy is too excellent for words. This buzzing, sickening hum of gurgling bass-driven disharmony is putrid and foul in every respect, whilst the dual vocal attack of Mark and Nikolai is frothing, scathing and laced with venom.

The near 9 minute ramble of Lambs To The Laughter sounds more like a rift between worlds, as Palehorse cut through our reality, opening a vortex to a new one. It starts with a solemn bass twang, drummer Ben Dawson’s repeated cymbal taps, before bringing the pain in the form of crunching, aggressive sludge that envelops through waves of punishing feedback, hoarse vocal shrieks and abject misery. Then the shift begins – a female voice starts to punctuate through this dirge; “you’ve embarrassed yourself….” is heard on an almost continuous loop, as this near-prog-grind-noise begins to consume itself. More voices are heard, layers upon layers of mutterings, accusations, strange wailing, questions about keys, until all you can hear is these sounds and Dawson’s slow, methodical drumming. It’s a harrowing, bleak and deformed track, that manages to claw its way back to that Palehorse crunching desolation in the last, desperate minute.

Reality continues to warp on the 8 minute fusion of crust-electronics and power-tools on The Shower. Edges sharpened to fine points, this reaches almost black-metal levels of fury, if it wasn’t for everything covered in so much toxic waste. You can hear everything humming and groaning with sadistic glee; one bass throbs with angry, nausea, (on the other-hand, it’s twin is a melancholy and sombre refrain), whilst Mark’s knob-twiddling antics, coupled with Nikolai’s exhaustive and punishing vocals (which really are an instrumental force, akin to that of Jacob Bannon of Converge).

Terrifying Japanese Coldplay Documentary is all kinds of wrong. The sludge-metal groove on this is ridiculously tight and volatile. It peels the skin back to reveal horrors – scorched and brimming with hate, it hacks and snaps with revulsion and is heavy as fuck. Probably the most accessible track on Looking Wet In Public, it’s still uncomfortable in places and sails so close to the noise-rock wind, it could put most people off, but it’s consistent, bludgeoning and hilariously dramatic. Closing track, 1893 is a slow-burn of strung-out riffs, clattering drum patterns and growling tension. It makes no bones about being full of trepidation and the moments where it goes full hardcore, burn with rage and see-sawing calamity.

I’d be happy if Looking Wet In Public was my swansong and so should Palehorse. This dividing, challenging and sickeningly destructive set of songs blurs boundaries between noise, metal, sludge and hardcore in such bitter and sinister ways – embrace this chaotic, vitriolic power immediately.

Stream Looking Wet In Public below and purchase from Holy Roar here.