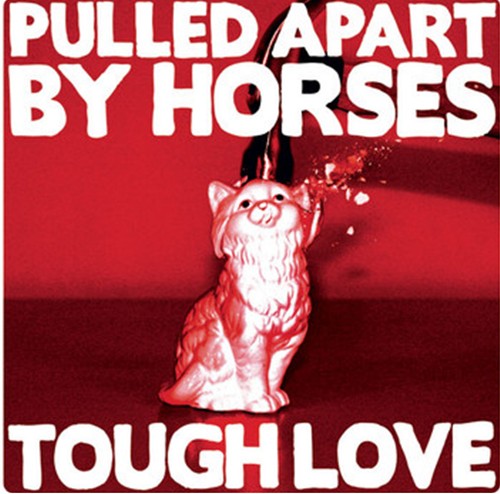 I would hate to say that Pulled Apart By Horses have grown up. â€˜Tough Loveâ€™ is, in many respects, just as stupid, loud, obnoxious and gnarly as their 2010 debut. Yes, there is progression in the song writing â€“ everything is slightly tighter and in some instances theyâ€™ve shoe-horned in some melody and an even darker, tone to their guitars (particularly on â€˜Wolf Handâ€™) but letâ€™s not forget this is still the band who wrote songs about punching lions and being punched by gypsies (why punching is used so much I have no idea).

â€˜Tough Loveâ€™ has a slight horror theme about it â€“ the first 3 tracks seem to reference werewolf transformation (sort of) and the likes of â€˜Night of the Livingâ€™ and â€˜Wildfire, Smoke and Doomâ€™ kind of have that evil side to them, even if the lyrics donâ€™t explicitly state that. For the most part, the lyrics are just as frat-boyish as the first album and often reference being trapped and the want/need to escape.

â€˜Shake Off The Curseâ€™ is a gnawing, bass-driven grind of sweaty rage. Vocalist Tom Hudson snarls his way through 3 minutes of biting and baiting punk that seems to be built around a maniacal taunt. This is their big-cat punching anthem; itâ€™s sinister and unwholesome with a dark, cutting edge and a venomous bite. â€˜Epic Mythâ€™ mixes equal parts lazy grunge, with mid-90s alt rock, ala Superchunk. The vocals range from drunken slurs, somewhat reminiscent of Craig Nicholls (thankfully, without the bipolar) whilst the creepy, monotone backing-vocal chant of â€œyouâ€™ll never leave here, youâ€™re gonna live hereâ€ is somewhat unsettling over a wave of scrawling de-tuned guitars.

â€˜Night of the Living (Iâ€™m Scared of People)â€™ is perhaps one of their strongest tracks. Sure, itâ€™s not the throbbing spasm of crunching riffs and spluttered screams. Instead it takes a new direction. It feels cleaner and more focused, with some superbly tight instrumental passages, see-sawing guitar tones that slide and meld into one another with precision and less scattergun frivolity. Vocalist Hudson is still as raucous as ever though. They even have time to slip some Hammond organ in for good measure and do you know what, it sounds fantastic. â€˜Wildfire, Smoke and Doomâ€™ kicks in like a lost Blood Brothers b-side; the squealing vocals, the dense art-punk attack and a snapping stop-start rhythm.

â€˜Degeneration Gameâ€™ sounds like a fucking riot. The opening bars are so dark and menacing and when it rolls into this splatter punk of noise and the words â€œHey, Iâ€™m so cool, I drink from skullsâ€¦â€ you know itâ€™s a winner. The second half then morphs into something The Icarus Line would have released back in their â€˜Monoâ€™ days â€“ that disjointed, ravenous gutter-punk shriek of scything chords and blasting drumbeats. â€˜Bromance Ainâ€™t Deadâ€™ was written to be played from big sky-crushing speakers, speeding down some lonely dirt road â€“ a strutting, snotty crash of overlapping vocals and stoner rock fury. â€˜Give Me A Reasonâ€™ lurches forward, like a drunken Godzilla; slurred, barked vocal roars, a disgustingly heavy bass grind that pulsates and lists with rampant delight.

There really is a sense of direct, blunt aggression on â€˜Tough Loveâ€™ â€“ whereas their first album was all high-fives, stage dives and DeLoreans; this second full length is a more vicious, taunt and darker sounding record. Itâ€™s still typically them and still typically maniacal and you really have no excuse not to own this if you like big fist-pumping shouty punk rock â€˜n roll, because itâ€™s stonking great.