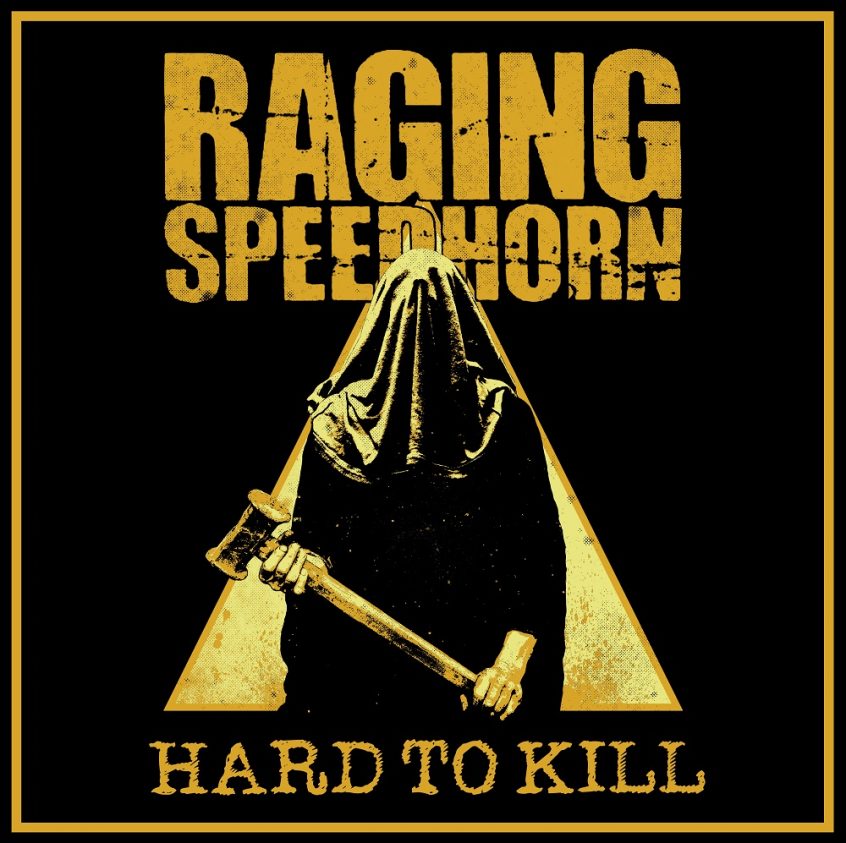 I really hope this album title is in some way a big “fuck you” to Covid. Corby’s Raging Speedhorn have been around for about 100 years (22 in reality) and have doggedly honed and crafted their style of metal throughout, despite a multitude of line-up changes, splitting up and seemingly supporting everyone under the sun (there was a time in 2000-2002 where whatever the band, Speedhorn would be the support). In some ways, Raging Speedhorn never fitted into that scene at the time, far too heavy in places, their brand of sludgy, abrasive, bludgeoning hardcore wasn’t the thing, despite that self-titled album being something that was constantly referenced and kicked around for ages. Nowadays though, it’s their time to shine. With a rebooted line up (vocalist Dan Cook from RSJ replaces longtime bruiser John Loughlin, Andy Gilmour from Hundred Reasons on bass and Dave Leese on guitar) Hard To Kill is their sixth album, clocking in at a modest 32 minutes and features an interesting cover of T-Rex‘s Children of the Revolution (more on that in a bit). It kicks off with the chant “WE DON’T NEED NO REASON TO DIE!” from dual vocalists Frank Regan and the aforementioned Cook, on Snakebite, which is just under 3 minutes of frothing, mic-twirling, high-octane rock ‘n roll destruction – a bludgeoning opener of spirited hardcore. It melds nicely into the slower groove of Doom Machine, which swaggers with whisky-drinking bravado and utilizes the dual roars of Reagan and the guttural screech of Cook well. There’s an almost chanting, battle-metal feel to the guitars in places, as though an army is marching to war, especially in the last minute where it kicks into life and I swear you can hear some subtle strings in the background.

The grumbling bass on Spitfire is a pleasing little opener, before launching into some weighty stoner-rock riffs and an almost rap-rock interplay between the two frontmen, as if both were squaring off against each other in the pit, ready to shed blood, sweat, and beers. “ONE MORE STEP AND YOU’LL SEE ME SPITFIRE, MOTHERFUCKER!” they both roar, with a cocky, aggressive, and blunt swagger that is typical of the ‘Horn.

Strong Every Time I Die vibes on the title track, Hard To Kill, which sounds like it fell off of The Big Dirty in terms of style, direction, and driving speed, all of which are big ticks. If we ever see live music again, this is the one to get the pit started, it’s a tornado of slam-dancing, hardcore, fist-in-the-air of relentless, passionate triumph, with that southern-rock strut of defiance and roaring glee.

Dredging riffs from the bottom of a swamp, the slovenly and mud-encrusted belch of Hammer Down follows, employing this Truckfighters fuzz of noisy, buzzsaw guitars, with this industrial, rhythmic pound and Reagan and Cook’s throat-shredding rasps of guttural defiance. Commence thy slow headbanging to this rager right now. Hand Of God goes, well, hand in hand with Hammer Down, really – it’s big, meaty, brash, and sounds like thunder, dirty, sludge-coated thunder. Brutality sounds like a runaway train, it’s a punch to the gut, a full-on adrenalin shot of rampant, wild energy, and howling hardcore, that takes a sudden and desolate turn into a doom-filled throwdown of crunching, noise-drenched gloom in the closing minute. The Beast is oddly a great sounding closer, despite it not being the last track on the album – it’s a huge, bombastic heavy metal anthem of ale-chugging “fuck you” to whoever the beast is, and honestly wouldn’t sound out of place on a Kvelertak or 3 Inches of Blood album, just for the sheer rage and ecstasy it conveys.

I’m assuming, that the Children of the Revolution cover was something the band jammed with during practice sessions, as it does feel somewhat tagged on the end of this; however, that’s not doing it any disservice, as it’s bloody enjoyable. Layering the original in that Speedhorn, grit, dirt, and punishing heaviness just beefs the track up, transforming it into a huge battle-metal, barroom sing-a-long of beer-drinking delight.

Hard To Kill is the sound of a band that has weathered many changes and turns in their 20+ year career but still sound strong. On the strength of this brief, but bludgeoning return, the Corby sextet are still thirsty and fans of Every Time I Die, Kvelertak and T-Rex covers will need this in their collection.

You can buy/stream/get mortal to Hard To Kill by Raging Speedhorn below.