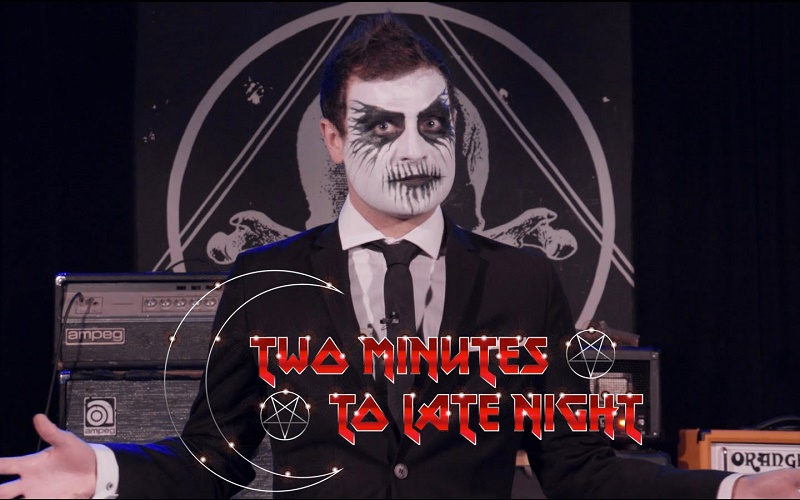 What do you get if you combine the idea for a talk show that doesn’t take itself seriously, a thrash metal house band, copious amounts of drinking, Ben Weinman, lots of corpse paint and pointless weather reports? Two Minutes To Late Night of course!

What the hell is this? Well, it’s a heavy metal talk show created by Jordan Olds and Drew Kaufman of Mrs. Woman Productions and features Mutoid Man (or should that be, Nick Cageao and Mutoid Man!) alongside interviews with musicians, stupid game-show sketches and Cageao being completely off his face. Why should you watch this? Ten reasons why this is great:

1) The presenter is called Gwarscenio Hall.

2) Mutoid Man are the house band. MUTOID MAN! The most fun metal band since Kvelertak and they absolutely rip!

3) Bassist Nick Cageao laying sprawled on the sofa for most of the show, spitting a stream of insults at everyone.

5) Ben asking to change the band’s name to “Celeste and the Bens.”

6) Gwarscenio asking Ben: “why do you play the guitar like there’s a snake trying to kill you?”

9) Cageao flirting with Laura Stevenson (or should that be Gwarla Stevenson?!)

Or, you could just watch the pilot below: