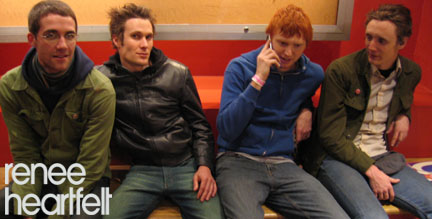 I first discovered Renee Heartfelt when I was sent their album to review for the music website, Planet-Loud. I’ve always been a fan of the emotional scene, ranging from the slightly lame Fall Out Boy, to the lesser known; Rival Schools, so discovering a band like Renee Heartfelt filled me with ecstatic joy. It should be noted that I knew very little about this band and I suppose I still don’t know that much, but more than I did from the very first time I listened to their album. Formed from the ashes of Striking Distance, Count Me Out, and Boston’s Give Up The Ghost, Renee Heartfelt are the opposite of the pent up anger of the over-burdened bludgeoning hardcore scene. Their sound gives nods towards mid-90s emo-types Quicksand (led by Walter Schreifels) blurring the boundaries between modern and late post-hardcore/emo music.

As stated in my somewhat now “forgotten’ review, their music is sincerely “heartfelt’ (excuse the pun) and it really has something that is both majestic and humble. It envelopes you like a warm hug; but the after effect can be decidingly astringent with a mournful, almost self-pitying edge. The feeling I have about Renee Heartfelt, is difficult to explain. Unlike some other bands, they actually sound like they mean it; like they really fucking mean it. In places it can be passionate and uplifting; it’s soaring like a mighty eagle; it’s rock music that is hauntingly melodic, but with a bitter touch (as stated previously.)

The band is probably more hardcore than many hardcore acts out there at the moment. Their ethic and obvious passion for music is evident through their debut “The Death of the Ghost’, just listening to Pete Appleby’s gnarled but hope-filled vocals are evidence of their strength and their enthusiasm. Instrumentally, Renee Heartfelt are a layered, noisy act. Huge, grandiose choruses, coupled with razor sharp riffs make their music worthwhile and instantly enjoyable.

Unfortunately, since the release of “The Death of the Ghost’ Renee Heartfelt have been missing in action. Their Myspace account was logged into near the end of July, but there has been no word of what the band are up to, let alone if they are still together. It would be a shame that a band of this calibre had decided to pack it all in. Here’s hoping that they are just laying low for the moment; waiting to explode back on to the music scene with their beautiful, sweeping, emotional rock music.