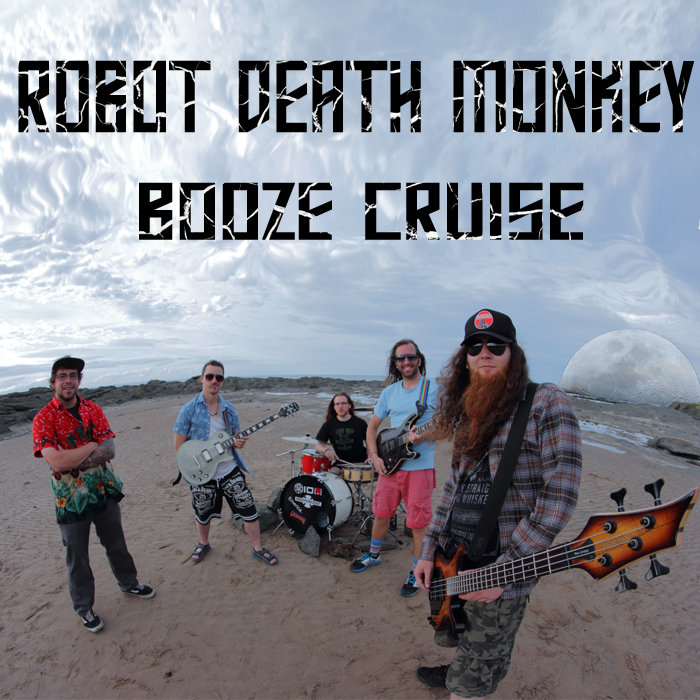 Fancy getting baked? Of course you do! Fancy downing several beers and crushing the empty cans into your skull? You bet! Fancy being an absolute legend? Where do I sign? Shred-masters Robot Death Monkey can make all of these dreams that seem so far out of reach a reality, and what they offer to help you achieve these dreams comes in the form of four new tracks from their second EP, Booze Cruise. Yes, we’re not doing things by halves here, nor are we being particularly subtle.

Partial to the odd tipple, Robot Death Monkey (for the uninitiated) are a four-piece from Edinburgh/Newcastle, led by brothers Shaun and Sam Forshaw (bass and drums respectively), with guitarists Tom Newell and Alan Travers. Together, they channel the kind of sick grooves, head-banging riffs and just the right amount of comedy to have you grinning from ear to ear. Booze Cruise is the follow up to the party-smasher that is Full Dunham (name your price) and takes up where that left off, thundering more and more riffs into your grinning face.

There’s obviously a ridiculous drunken swagger to this EP – the title track, Booze Cruise, encourages the listener to crack a cold one, leaving them to decide whether to down it during the track’s duration or slosh the contents over their head. Ridiculously posturing ahoy, especially with the accompanying video – taunt stoner rock collides with old-school Thin Lizzy-soloing and Shaun’s gravelly vocals, which have a slight American-“yeeeehhhaaawww!” twang to boot. It’s also bone-crunching on the heaviness scales, featuring some absolutely crushing, bong-induced guitar riffs in a similar vein to Fu Manchu. wailing cries of “drinking whisky, from a loaded gun...” and, Gary Dunham is in the video! What more could you want?

“One in the clip and one in the chamber!” Roars Shaun Forshaw on the grime-crusted, fuzz-metal thrash of Viking Bong, which bristles with mead-guzzling aggression and cocksure swagger. It’s the kind of track to race to the death to, overcharging your vehicle beyond its capable means, blazing one out and not giving a damn. Honeyslide is a groove-drenched slice of mostly instrumental jamming, giving a hefty nod to key influencers, Karma to Burn, with a side edge of Clutch‘s slick Maryland stomp and moments of prog majesty thrown into the mix. Final track, the enigmatic Bourbon Bowl is a colossal five minute jam session smackdown of alcohol-quaffing, horn-throwing, sludge-stoner-metal frivolity – lovely, lovely stuff.  Line up the tinnies and fill your ears with this alcohol-soaked 4-tracker of drunken antics – yo, ho ho and loads and loads of bottles of rum.

You can download Booze Cruise from Robot Death Monkey’s bandcamp below.