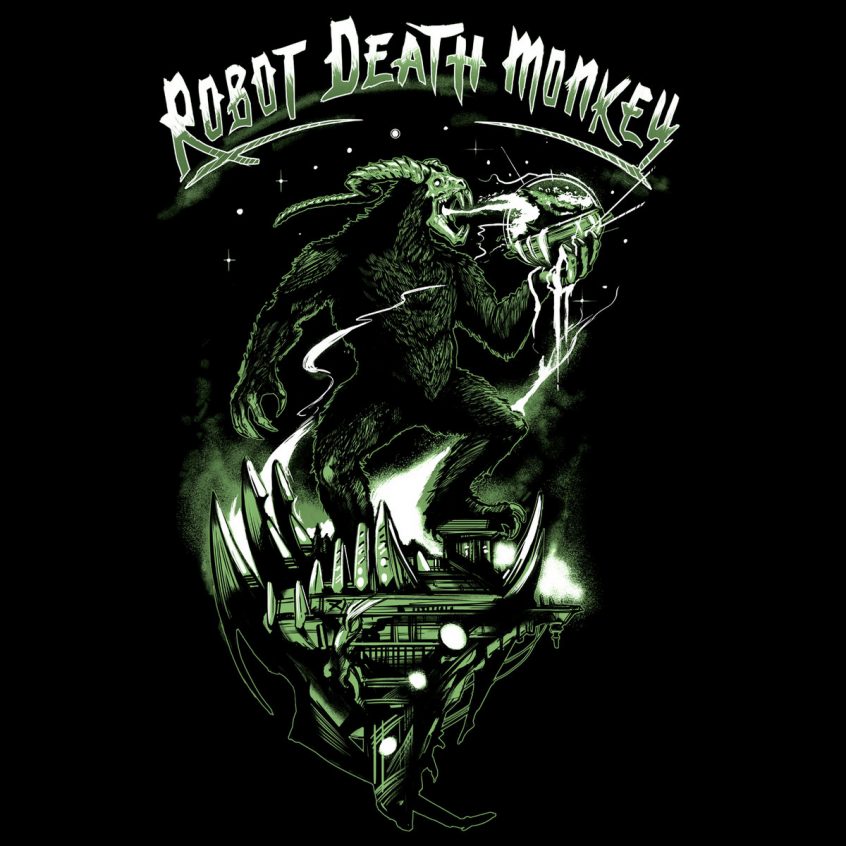 It’s safe to say, Edinburgh’s Robot Death Monkey really do not take themselves seriously. Drinking strong lager, riffs, and being the finest stoner-groove machine in the land seems to be their reason for existing and fair play to them. This foursome has gone through several line-up changes (and name alternations – the Time Travelling Hornet anyone?) and has delivered some of their best work to date in the form of this tasty EP, Druid Odyssey.

“King of rock ‘n roll, OAP, Egyptians don’t fuck with me!” is the stand-out line from the rollicking, Bubba Ho-Tep (an ode to the bizarre Bruce Campbell film of the same name, if you haven’t seen it, the premise is Elvis is alive, lives in a retirement home and fights an evil Egyptian mummy who terrorizes the residents – seriously good shit). The track reminds me somewhat of Clutch at their most goofy and swaggering – think Subtle Hustle or Promoter (of Earthbound Causes), heck, you could pick anything off of Blast Tyrant really, it’s an absolute party, so why not cherry pick from one of the most fun, raucous hard rock albums of the 2000s? Blood Wizard brings to mind the biting humour of Red Fang, matched with their crunching, dirty, stoner-rock buzz of mischief and mayhem, with some air-guitar-worthy theatrics thrown in for good measure.

Strong Fu Manchu Mongoose vibes on the start of Trejo (an ode to the implacable Danny Trejo), which is a juggernaut truck of unstoppable power, with elements of prog and space-rock jammed in for good measure. “Love to smoke bud, toooooday!” roars Forshaw on the bluesy-groove of The Green Bastard, which rolls out with the rough and ready style of a freshly rolled cigarette, complete with a bassline that oozes sleaze and debauchery. “Smokin’, drinkin’, fixing caravans!” and “hooky, moonshine, white-trash millionaire!” sums up all you need to know about RDM’s mascot, Gary Dunham, on his eponymous track. It’s a thundering, robotic, stop-start air-guitar shred of squealing stoner rock, celebrating what we are assumed to believe, is a fucking legend.

It’s also worth checking out the Robot Death Monkey: 10 Years of Riffs Documentary, where they talk about all things RDM, the history of the band, the many line-up changes, building skateparks, music videos, and of course, the enigma that is Gary Dunham.

Stream/purchase/crush beer cans into your stupid head with Robot Death Monkey and Druid Odyssey below.