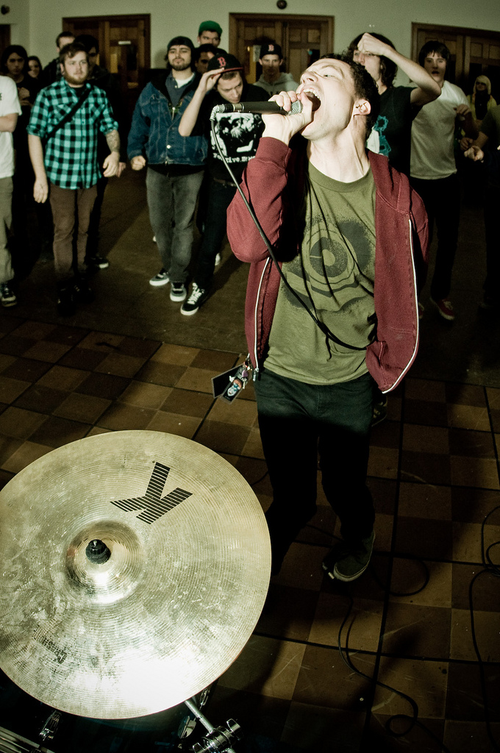 I actually feel I’ve missed quite a lot recently; got a bit of a backlog that needs clearing – it’s just making time for it all really. I’m still yet to hear the new Obits album in full, despite it being out for the last 2 months. The Cold Cave album is particularly interesting and one I strongly recommend. Weekend Nachos are currently killing it in the hardcore stakes – so if you fancy some deranged, grind-sludge power-violence then check out ‘Worthless‘; an album I awarded 9 out of 10 on metal site, planet-loud. On this month’s Rock Sound CD, Foxfires, The Wonder Years, Dananananaykroyd, Tree Trapped Tigers, City & Colour and the rather superb TouchÃ© AmorÃ© all receive a high-fuckin’ five for being totally awesome.

Iâ€™ve heard a lot of complete gash in my time, but nothing quite as appallingly bad as this. Pop-metal by numbers that will probably sell fucking shed-loads to 14 year old girls â€“ hey, if you can exploit a target market for big bucks with gimmicksÂ you do it, right? Also, they all appear to have about 6 ravens imbedded in their heads and had make-up shotgunned blasted into their faces.

Fucked Up â€“ A Little Death

A shot to the stomach that leaves you winded; Fucked Up are the angry, drunk, bearded lunatic who is inches from your face, bellowing a tirade of incomprehensible but dangerous, ramblings. The layers upon layers of guitars, not to mention the crunching drum rolls and Father Damianâ€™s rasping vocals make for an intimidating, yet boisterous blast of heated punk rock fury â€“ glorious stuff.

Frank Turner â€“ I Am Disappeared

Classic Frank Turner here â€“ that folk-bounce, quite sweet sounding. The drums add a well needed kick and the breakdown for the chorus is quite superb â€“ all twinkling pianos, crashing cymbals and fast-paced strumming. Still preferred it when he sang about Byzantium empires falling though.

Stripped-down, barebones punk rock â€“ hell yes. TouchÃ© AmorÃ© completely batters the listener; their vocalist spits his words with venomous malice, yet is still clear and perfectly audible. Fuck choruses, this is 88 seconds long of tight, concise hardcore that is so sharp,Â you can feel the air cutting around you.Â Ones to definitely watch – the future of aggressive music.

South-coast (UK) hardcore upstarts; Heart In Hand mix the gut-rumbling roar of BARS with the same intensity of Give Up The Ghost. Thereâ€™s some excellent gang-vocal chants and that sweaty hum of bludgeoning, no-frills aggression, mixed with melody that hasnâ€™t been completely buried. Could do with being slightly shorter though.

Foxfires â€“ Resilience On The Side Of The Road

*N64 kid air-punch* YES! This is the kind of thing I want â€“ Rampant, scrambled speed-punk that sounds like it came out in the 90s, back when people thought windmilling was cool. Itâ€™s not. But this is. The amount of times vocalist Josh Lyford screams â€œFUCKâ€ and the way he spits his vocals with such distaste and spite, itâ€™s as if a bear with tourettes has decided to front Agnostic Front after listening to some Champion records.

Rather disappointingly, not an Odd Future project. Blitz Kids vocalist must be the most relaxed man in the world. His voice is so horizontal, you could stand a house on it. Unfortunately, this is not a compliment â€“ he sounds bored out of his mind and the rest of the band seems content to go through the motions of some very weak UK-rock that barely makes an impact.

Big swinging hook of pop-hardcore has again impaled itself in my back. The Wonder Years absolute kill it. The melody is absolutely spot-on as each band member falls over themselves to sing their part â€“ itâ€™s a delightful scramble of gang-vocals, chants, power-punk blasts of anthemic sunny destruction and the chorus, oh god the chorus; life-affirming. Four Year Strong are probably picking their jaws up off the floor as I type.

Do Dananananaykroyd still do the double drumming thing, or is it all dual-vocals now? Not that it matters. On â€˜E Numbersâ€™ the Scottish sextet sound suitably mental. Actually, I really donâ€™t know what to say about this, because itâ€™s completely unhinged to the point of breaking apart. One of the guitarists seems to keep squealing and distorting his instrument with no concern for anyone else, whist the other 6-stringer and the drummer play this stabbing, stop-start poppy bounce of uplifting rock â€˜n roll and the two singer dudes trade words like playground insults â€“ incredible.

The keys on this are absolutely gorgeous. Iâ€™ve never really listened to Maybeshewill before, despite knowing them to be an instrumental band, theyâ€™ve passed me by â€“ but this is truly spectacular. The quite loud dynamic is basically the intimidating/aggressive dynamic in this case â€“ Some great heavy-emo rock blasts of noise, coupled with the melancholy of the strings and the rising piano chords. A chilling, raucous burst of sounds.

Big fan of Dallas Greenâ€™s voice â€“ some of his best work is his Alexisonfire â€œwooaaahhhoooossâ€ â€“ this synth led piece is fairly haunting, despite a trippy bounce that the drums seem keen to inject into proceedings. Greenâ€™s pipes dominate this though; his extremely sorrowful croon is enchanting. Props to the fuzzed-out, mangled guitar solo, which seems slightly out of place, yet gives the track much needed warmth.

No idea what Shapes are up to â€“ sounds like they all went away, wrote some stuff, then jammed it all together and decided to construct the lyrics out of various shopping lists and what they saw whilst staring out of a window. Obviously they were high when they recorded this â€“ structure-less and scrambled math-punk rambling that is both exciting and completely stupid at the same time.

One of the most boring tracks I have ever had the misfortune to listen to. Grow some balls ffs.

Itâ€™s like someone has tried to mash to Adebisi Shank tracks together backwards, then cut up various parts and glued them back together in the wrong order. Not even sure what to bill this as â€“ synth-led technical space punk, with a jazz element of ramshackle chaos. Three Trapped Tigers make alien music for aliens and itâ€™s refreshing, uplifting and kind of sounds like the Space Harrier theme played by Lightning Bolt without the scuzz. Best track on the entire cd.

A meandering, almost listless slog of tired, metal that never starts, but frustratingly never stops – making it to the end of these 8 minutes should reward the listener with a medal – aÂ pointless, soul-crushing dirge.