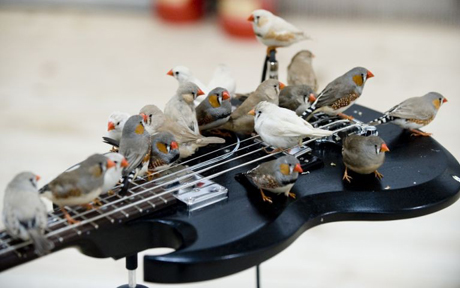 The Horrible Crowes and Hawks and Doves? Quite a bird theme this month. Fairly apt really. I went to Rainham Marshes today and saw a Lapwing, a Black-tailed Godwit, several Swans, loads of ducks, a Crane and a massive flock of Canadian Geese. I love away days = let’s go round a reserve and look at birds/wildlife, then eat cake and drink tea in the visitor’s centre that resembles a crashed space station. Awesome.

â€œHey itâ€™s some dude doing a really good impression of the guy from The Gaslight Anthem!â€ Yeah thatâ€™s because it is Brian Fallon from The Gaslight Anthem. Accompanied by guitar tech Ian Perkins, The Horrible Crowes make dark, blues-inspired rock, laced with that moody shiftiness of stepping into a bar youâ€™re unaccustomed to and having the entire clientele turn to look in your direction at â€˜what the cat dragged in.â€™ Gritty and lonely; a song that sounds like someone singing about a glass half empty than half full, would be interested to hear a lot more of this project.

Shouty metalcore usually bores me to the point of wanting to throw myself off something, but at least The Devil Wears Prada bother to actually inject some originality. Three different vocal batterings are on offer; from the wide-eyed, banshee howl of disgust, to the guttural bellowing to the clean, Dallas Green-style harmonies this Christian mob do a decent job, and the screams of â€œBORN TO LOSE!â€ over a wave of crunching beatdowns certainly help matters.

Magical stuff this. Mariachi El Bronx triples the passion of their punk counterpart, with a song bursting with sporadic brass, flamboyant guitar plucking, rampant percussion and vocalist Matt Caughthran singing his heart out. Gutsy and mesmerising, this is a band that doesnâ€™t seem to be able to put a foot wrong, whatever their style. If any of the songs on their second album have even half the impact and beauty of â€™48 Rosesâ€™ then weâ€™re in for a treat.

Splice my sausages, what in hell is this? Captain Fightstar doing acoustic stuff? Canâ€™t you guys do some really loud breakcore nonsense, or something that sounds like a Dalek wanking in a cathedral as opposed to playing a guitar with 3 strings on a farm up North? Absolutely cringe worthy, hand-wringingly awful lyrics. Good voice though, which is what just about saves it. Preferred your early stuff about the Year 3000.

Rise To Remain â€“ Nothing Left

The guitar playing is in the similar vein as Killswitch Engage â€“ all squealing stop-start stutters of shrill, jagged breaks. Instrumentally, itâ€™s solid, youthful metalcore that favours that radio-friendly appeal of mashing fast metal and clean vocals, that are a touch to pop for my tastes and fall somewhat flat in some areas, which is a shame as thereâ€™s real promise lurking here.

All Pigs Must Die â€“ Sacrosanct

Kevin Baker from Hope Con and BARS? Already good. All Pigs Must Die are heavy. Speed, crust-hardcore punk that leaves massive purples bruises bristling with anger. The thrash-metal chorus breaks give the impression of a dense wash of battered and mutilated grindcore played by a band off of Bridge 9 records. Dark, intense hardcore that snaps with menace and desolation.

Ancient VVisdom look like 4 guys who fell off the set of Sons of Anarchy. I was pleasantly surprised to find that they sounded nothing like I imagined. Instead of some trite standard thrash metal, â€˜The Oppositionâ€™ is a song born from the body of stomping, almost acoustic folk-metal with a hint of bluesy-angst and rebellion. â€œHail to thee, Lord Lucifierâ€ croons vocalist Nathan, whoâ€™s voice is laced with sombre dejection and a hint of revulsion. Stirling work lads, definitely worth repeated listens.

Il Nino, is that you? Knock three timesâ€¦.nicely gnarly bass. Probably should tune those guitars differently lads? No? Sod you then. Got tired of the quiet/loud/quiet dynamic 2 minutes in â€“ sounds like Incubus from the â€˜Make Yourselfâ€™ album â€“ which I like, but Iâ€™m sitting here thinking â€œwhy donâ€™t I put Incubus on instead?â€ Good voice mind, but really tedious fits and starts which just seem an excuse to stretch this track out to well over 5 and a half minutes.

I saw Black Tide recently â€“ was impressed by their energy and metal spirit. The screaming/clean vocal mix is fairly old hat, but Black Tide nail it incredibly well, injecting their youthful exuberance and bite into their music. Theyâ€™re incredibly tight and the vocals work best when Gabriel is barking them with barely restrained spite. Somewhat too clean-cut in places â€“ the edges kinda need roughening up.

Ex-Planes Mistaken For Stars frontman Gared Oâ€™Donnell has the kind of voice that cuts deep â€“ it could probably strip paint from walls. Itâ€™s a scratchy, hoarse croak of brooding disgust; like heâ€™s spent the day downing whisky and chain-smoking then stepped into the recording studio after a coughing fit. Musically, thereâ€™s elements of stoner-rock at its very bare-bones, rattling and cracking to pieces under a punk attitude of misery. Absolutely love it.

I donâ€™t like the name, but the music is something I could be seriously interested in hearing more of. Obvious points of interest point to Hot Water Music; the deep throaty rattle provided by frontman Tim Lawrence, who sounds like his diet has consisted of purely gravel and lighter fluid. It has that early 90s emo blast of jangled guitars, mixed with big walls of crashing drums and scrawling feedback.

Not sure what the hell is going on here, but I like it. For a three piece, Lightguides make quite a racket. Both guitars see-saw up and down through some quite taunt and tuneful post-hardcore, that tries to sound like a Fall Out Boy song, but even tighter, with jagged, cutting guitar lines and a full-blown injection of sugary pop-punk bounce. Like a bunch of attention deficit disorder patients smashing their instruments into each other over some odd time changes.

Nazca lines have been listening to Rick Froberg a lot then. Nice stop-start parts on this, kind of staggers with this menacing, creepy gait. Vocals are superb – a demanding, sterile shout over some huge post-hardcore rock that sounds fucking massive.