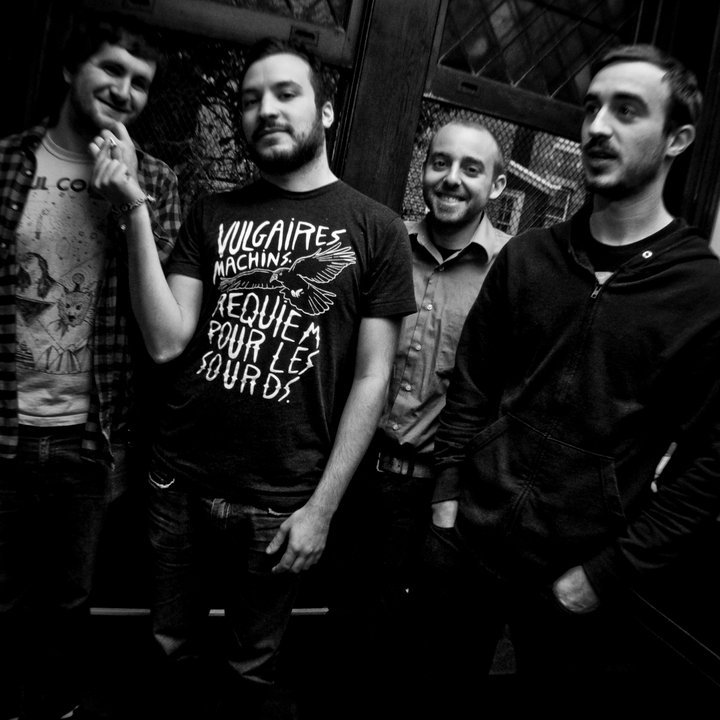 Punk rock dominates this month, with The Menzingers, Sharks, Your Demise, Say Anything and Above Them all being superb.Â  I can see my bank balance taking a bit of a hit later on, mind.

The Used â€“ I Come Alive

What the fuck is happening on this? Sounds like a load of xylophones being played in the background to a My Chemical Romance b-side. An edge of groove punches through and some heavy keyboard-distortion. Bert McCracken still has a solid voice â€“ dips in and out of that strained high pitched wail to a turbulent bark

Massive fan of Keith Buckley â€“ the dude has this swagger, great voice and slickness. â€˜Revival Modeâ€™ runs at a slower pace to Every Time I Dieâ€™s usual racket, but itâ€™s still punches a giant hole of fetid, alcohol-drenched southern rock into your ears. The guitars swirl and roar with classic-rock pretension, whilst Buckley conducts it all with his feral roar and swaggering debauchery.Â  Brilliant stuff.

Meshuggah â€“ Do Not Look Down

The bass sound on â€˜Do Not Look Downâ€™ is a grunting, full-blown churn of ear-joy. It staggers along, following this ungainly rhythmic crunch, supported by the contorting guitar work and snapping vocals, which represent a snide-filled yowl of an enraged drill sergeant mixed with the devil.

Hands up if youâ€™re amazed Soulfly are still about? Max does some nice gargling vocals â€“ dude still has it. Gang chants (â€œWORLD SCUM!â€), relentless, tense, thrash attack and actually one of the best Soulfly/Max related songs Iâ€™ve heard in a long while.

Your Demise â€“ Forget About Me

Honestly, the plethora of hardcore punk about at the moment means all bands seem to congeal into one amorphous sound if youâ€™re not careful. Having no idea what Your Demise ever sounded like before (probably have listened to them, but I canâ€™t remember) this is supposed to be progression. Itâ€™s seriously, fucking incredible sounding. They chuck in the pop-hooks with a â€œoh, you want these? Sure!â€ The backing vocals are superb, as is their dense, punk rock sneer. MORE PLEASE.

Anti-Flag â€“ This Is The New Sound

Vocals arenâ€™t as raw and stripped as previous Anti-Flag material. It also sounds a bit too â€˜lightâ€™ for them. I was expecting more fury for some reason. Nice bass work and they sandwich the â€œwoaaahh ooohhsâ€ in perfectly, like they were writing a step-by-step guide to punk rock 101.

The Menzingers sound drips with real honesty. Lyrics are heartfelt and the vocals pack a serious melodic intensity (and originality â€“ Iâ€™ve never heard a voice like this before; a seriously sorrowful, bitter edge). Maudlin punk rock has never sounded so good, best track so far and an album to add to the list.

Thereâ€™s nothing I donâ€™t like of this 2 minute and 58 second song. From the jaunty acoustic strum, the harmonising backing â€œwoahsâ€, the bit with the whistling, the fantastic synth breakdown, the way Bemis spits the words â€œanything for youâ€, even the bouncing, disjointed flourish near the end, which is completely alien to the rest of the song, but then Say Anything are pretty alien in that respect â€“ truly spectacular.

The guitars on this are pretty bleak. They wash over you; very minimalist and frayed sounding, but with this slick, warbling tone that gives it real punch and body. â€˜Luckâ€™ sounds hopeful, the vocals are crisp, delicate and draw you in with that edge of morose feeling.

Above Them â€“ Concrete Forgiveness

Four great punk rock songs in a row? Iâ€™m going to be out of cash. Above Them sound not to dissimilar to most of the acts on Household Name Records back in 2001. This is a good thing; it has that gritty edge, gruff, jovial vocals and a slight folk edge and bounce, plus obligatory handclaps. Itâ€™s a winner.

Like a cataclysm of raw hatred, Primitive Weapons make hardcore thatâ€™s dark, gnarly and rotten to the core. A crushing, roll of torment, with eerie, ethereal backing roars, a singer whoâ€™s vocal chords are made of static and revulsion, whilst a bass-driven grind of despondent, crushing noise-rock kills everyone in the room.

Seriously? Complete and utter tossycock. NEXT.

In two minds about this, as the vocals keep see-sawing between like and dislike. Loads of throat-ripping screams, then the auto-tuned to fuck clean vocals kick in and it just feels so fake and uninteresting. Then for some reason it goes all Enter Shikari digital breakdown nonsense for 10 seconds before swinging back to thisâ€¦. ClichÃ©d, pedestrian metalcore-by-the-numbers dross.

Make â€“ Returning To The Ruins Of My Birthplace

Primitive Weapons seem a bit soft in comparison. MAKE want metal to be an all encompassing crushing, psychedelic sound. The trepidation and pressure for more dread, more loathsome noise, treachery and chaos is piled on and doesnâ€™t stop.